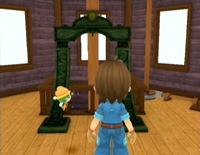 Upstairs in the windmill on Horn Ranch you'll find another pedestal, but the green bell is missing. Where is Daren? Finn thinks maybe Witch might have an idea on what to do next. She lives in Fugue Forest.

If you go to the forest entrance you'll discover that the gate is locked! Go back to Horn Ranch and talk to Hanna. She doesn't know why the gate would be locked when it didn't use to be locked, so she sends her husband out to investigate.

Return back to the forest entrance and you'll find Cain looking at the lock. He doesn't have the key, but he believes Dale has it.

Walk to the carpentry shop in the Garmon Mine District and talk to Dale. He did indeed lock the door to the forest and hands over the key.

Use the key on the door in order to pass through the gate. You also need to have your Axe in your Rucksack before you can enter the forest.

The path through the forest is a series of randomly generated screens. There's about 12 random tree areas you have to pass through. As you walk into each area, search for a small path that leads away from where you are. Sometimes the path can be hidden behind a tree on the north-side of the screen. There are no dead ends, so keep searching if you don't see the path right away. 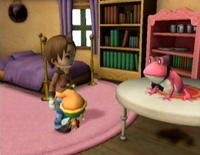 At the end of the forest you'll find the Witch's house. When you go inside there's nothing there but a pink frog! Maybe Wizard knows something about this, so head back to Harmonica Town.

Wizard knows all about the pink frog in Fugue Forest. It's actually Witch! The Witch had tried to cast a spell to restore the divine tree. Even after Wizard had warned her not to do it, she went ahead and had some unfortunate results. She's stuck as a little froggie for the moment. Wizard can restore her but he needs a few ingredients; a Hibiscus flower, Perfect Butter, and Good Cornmeal. The Hibiscus can only be found on the island to the south, which requires a boat to travel there.

Go to the Fishery and talk to Ozzie. Boats have not arrived in Harmonica Town for quite some time, due to the fact that the Lighthouse is broken. The water aqueduct that flows through town is needed to run the light on top of the lighthouse. Ozzie suggest that you go talk to Paolo, who is inside the Lighthouse.

Paolo will tell you about the Lighthouse. He will also give you the key to the aqueduct gate that keeps the Watery Cave protected. There is also a strange, cryptic map behind him on the wall: 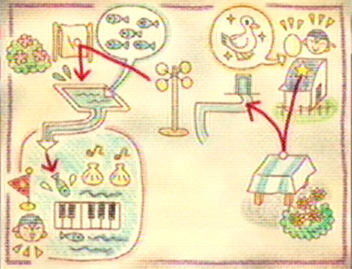 The aqueduct gate is on the level between Wizard's house and Choral Clinic. Use the key on the gate to open it. Inside the Watery Cave you'll find the Blue Bell on its pedestal!

Ask Ben to ring his bell, but no matter how much he pleads, the bell will not ring. Has it forgotten how to sound? Finn thinks the Goddess might know something.

Back at the pond, Goddess says someone who knows about the Watery Cave might be the person who can help with the Blue Bell. Head back to Paolo, who mentions that he heard from his dad that the town itself can help tune the bell. Paolo will point out the strange map on the wall that you saw before.

Oh, but something is missing... Paolo does some more drawing and now the map makes more sense: 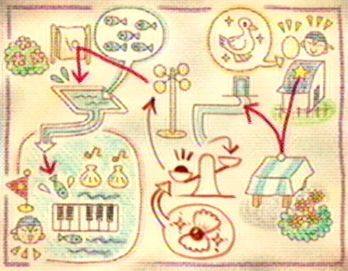 It looks like the two of you will use the town's aqueduct system to help tune the bell. You just have to collect a few pieces:

You can buy a Duckling from Horn Ranch for 800 G. The Duckling will take 7 days to mature into a Duck. The adult Duck will lay an egg every 2 days, and the quality of the Duck Egg won't matter for this task.

Horn Ranch won't sell duck eggs at their shop until after you ring the Green Bell, so you must produce the egg from your own farm. 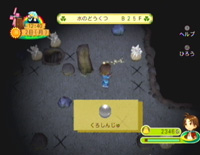 Near the Blue Bell's pedestal is a staircase down into the Watery Cave mine. On level 25 you might see a Black Pearl on the ground for you to pick up. The Black Pearl shines, so it is easy to spot on the dark cave floor.

You just need a total of 5 fish. Any kind of fish will do, and they don't have to be all of the same species. You can buy fish from Ozzie's Fishery shop or catch them yourself.

There's no way to control this one, but most of the days on Castanet have some sort of breeze blowing. If you want to confirm, buy a television set from Barbara at her shop in Garmon Mine District and then watch Elli's daily weather report. She'll tell you the next day's sunshine and wind report. 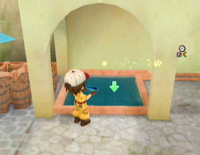 After you have all of the components necessary, talk to Paolo when he is standing outside the lighthouse. Tell him you have all the parts and then he will freeze time (of sorts) so you can walk around town and set up the contraption.

The 5 fish need to go into the pool of water that is up the stairs to the left of the Orcarina Inn, the Black Pearl needs to go on the scale on the right-side of the inn's door, and the Duck Egg needs to be placed on the roof of Hamilton's house. You will see small green arrows indicating where things need to go.

When putting in the 5 fish into the pond, remember you are placing them in one at a time and not the entire stack of fish at once.

After you have the pieces in place, talk to Paolo at the lighthouse to start the process. The egg will roll down Hamilton's roof, bounce off a tent, land in the aqueduct, roll down to the scale, which shoots the pearl up into the air and off the wind sock. The pearl will land in the school of fish, who become startled and swim down the aqueduct, landing on a series of piano keys which plays a little tune.

Success! Now head back down to the Watery Cave, where the bell rings out and returns the power of water to the land. You can now catch new kinds of fish and travel by boat to Toucan Island. You'll also unlock the mayor's son, Gill.