The 3DS version is also available for download off of the North American Nintendo 3DS eShop. The digital version of the game sells for $29.99 and will take 1929 blocks of memory on your SD card. The 2013 digital version of the 3DS game does not appear to have the same freezing and lock-up problems that the 2011 retail version has.

The 3DS version was created during Natsume's localization of the game. It was finally released in Japan in December 2017, over seven years since the game's initial DS release in that region. The JP 3DS version contains bonus download content and post-marriage art scenes, but other than that the game plays identical to the older English version.

The Story of the Two Towns 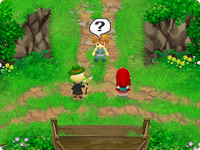 Long ago the towns of Bluebell and Konohana were friendly neighbors, joined together by a tunnel underneath the mountain that separates the towns. Eventually the towns started to disagree with each other on whose town had the best cooking cousine. As the villagers became more obnoxious with each other, the Harvest Goddess became more annoyed with them. One day she finally put her foot down and collapsed the tunnel between the towns, cutting them off from each other. Now the only interaction the towns have with each other is at their cooking festival, where their cooking conflict continues four times per season.

As a new farmer, you are eager to start your new life at one of the towns but a freak travel accident makes you to forget what town you originally were going to live in! Listen to each mayor's story, hear about each town, and then decide where you want to start your new farm life. 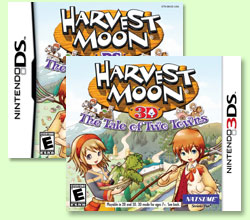 As its name implies, Tale of Two Towns allows you to select the town you want to live in. Bluebell Town's specialty is with animals such as cows, chickens, sheep, and the new alpaca. Konohana Town concentrates on growing crops, trees, and grains. Both farms in each town have a small area where you can have some of the other town's features; there are small fields for crops on the Bluebell Town farm and a small barn for animals on the Konohana Town farm.

Different villagers live in each town and have their own theme. Bluebell Town is a European-style town and Konohana Town is Asian-themed. Unique shops exist in both towns and you will need to travel across the mountain to shop in each town.

Residing in a specific town is not permanent. You can change your home town once per season and are free to move back and forth between towns. Players are expected to move from time to time in order to upgrade each farm and experience each town's separate festivals.

Some other features include:

Harvest Moon: The Tale of Two Towns © Marvelous Interactive Marvelous AQL and © Natsume. Harvest Moon character design is © Marucome. This is a fan site and is not officially sponsored or employed by MMV/Natsume. This site is built off of personal gameplay experiences and help from the Japanese guide books. Web site design © 2011 fogu.com