An unofficial guide covering
Harvest Moon: One World
for Nintendo Switch, PlayStation 4, Steam, and XBox One

Harvest Moon: One World is an expansive-world exploration game developed by Natsume and published by Natsume (in North America) and Rising Star Games (in Europe and Australia). This video game task the player with traveling to different areas, each with their own unique environment and animals, with the goal of restoring the world's bountiful soil. Players will grow crops, raise animals, and help out their friends to show them the importance of caring for one's world.

The story begins with a mysterious picture book the player receives on their birthday. The book describes crops that nobody has ever heard of or have seen before. While searching the woods for dinner potatoes, the player will come across a little fairy that reminds them of something they've seen in their picture book. Chasing after this little fellow will set the protagonist on a path to hunt for long-ago forgotten crops and discover a way to revive the magical Harvest Goddess.

And the player will be blessed with the awesomeness of Doc once again, this time in a descendent named Doc Junior. That's really why you want to play this game, right? 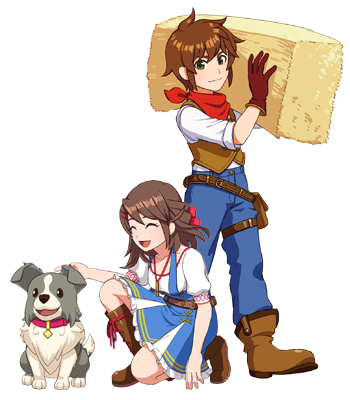 Because the crops of yesteryear have been forgotten, only the Harvest Wisps have crop seeds. Players will have to search the world for the little fairies to collect their seeds. Wisps will appear during certain times of the day (or every other day) and disappear when their appearance time expires. Because there are over 230 types of crops and flowers in the game, hunting wisps can get tricky when trying to locate specific crop seeds. The in-game map allows players to filter their wisp list to locate just the ones they're looking for. Crop seeds can eventually appear in the village general stores, but only after the player ships a lot of crops.

One World is made up of five distinct environmental areas. Each area has a town, animals, and other tidbits that are unique to just that area:

Each area has a seasonal preference, with the Calisson area being the typical four-season area. Players can move their base-of-operations around by using genius Doc Jr's Expando-Farm invention. For example, players can move their farm to the Halo Halo beach while they work on solving the village's problems. This allows players to be closer to the action rather than having to run all the way across the world to go to bed.

Speaking of which, players can stay awake all night long and into the next morning. This allows for late-night Harvest wisp hunting, but there is a stamina penalty for not going to bed.

Animals can also be raised on the farm. There are different varieties of animals that can be cared for on the farm. Some will give products (cows, sheep, chickens), a few can be used as ridable mounts (horses, reindeer, and camels), while others are just for decoration (tigers, jaguars, and bears). If you're not interested in the typical dog pet, try befriending a small wild animal instead; you might like having a rabbit or an ocelot as your house pet. Like the Harvest Wisps, the wild animals have specific times when they're available for befriending; you can't pet a black panther if you go to bed too early!

Harvest Moon: One World is © Natsume, Inc. This is a personal fan site and is not officially sponsored or employed by Natsume or Rising Star Games. This guide is built off of personal gameplay experiences as well as feedback from other Harvest Moon players and fans. Web site design © 2020 fogu.com