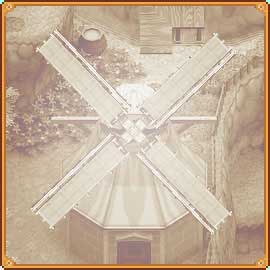 Harvest Moon: Grand Bazaar is the eighth Harvest Moon game published by Natsume and developed by Marvelous Entertainment Inc. of Japan for the Nintendo DS system. The game series sets players with the task of developing a farm for the benefit of the game's world and characters. Players grow crops, raise animals, and make friends in order to progress through the game.

The Story of Grand Bazaar 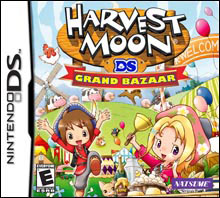 Zephyr Town once had a world famous bazaar, where shoppers from distant lands would gather to purchase goods from the town's bazaar stands. Unfortunately the bazaar from yesteryear has now fallen into despair, and very few visitors now a days come to the weekly gathering. You have recently moved to Zephyr Town to take over the run down farm on the outskirts of town, and hopefully with your hard work and efforts, the town's bazaar can be revitalized and become grand once again.

Besides growing crops on the farm, you can take care of cows, sheep, and chickens. The items that you grow on your farm can be processed by the town's three special windmills. The windmills are cared for by Isaac, and he will fix them as you work your way through the game. One windmill is for fermenting items such as pickles, cheese, and wine. The second windmill is for crafting non-edible items like jewelry, tools, and wool. The third windmill is for processing crops back into seeds or making perfume.

The directional buttons on the DS control the character movements. The game plays on the DS' top screen while the bottom screen is reserved for area maps, inventory, and menus.

This game also includes a wifi system that allows you to visit (or host) a remote game. After you exchange Friend Codes, you can get together with up to 3 other people to visit one of the farms in your group. You can shop at the person's bazaar, help their farm by watering their crops, and even go fishing in their streams.

Harvest Moon: Grand Bazaar © Marvelous Interactive and © Natsume. Harvest Moon character design is © Marucome. This is a fan-site and is not officially sponsored or employed by MMV/Natsume. This site is built off of personal gameplay experiences and help from the Japanese guide books. Web site design © 2010 fogu.com