The message board for Ushi No Tane - A Harvest Moon, Legend of the River King, and Story of Seasons fansite.

Crystal Power
Not the Eggplant Wizard

Crystal Power wrote: ↑Nov 16, 2022 1:27 pm So seeing as how they are making everything more, um, nice, lovely, or is the word happy? Anyway seeing as the direction things are, the bar is a café (to avoid alcohol), the bachelors are less rugged, Lumina is not underage from the start, Murrey is no longer poor/dirty, etc. Do anyone think they may allow (not sure if I have to spoiler tag this)
Spoiler:
Nina to live or at least make her death preventable if the player choose to?

Spoiler:
Didn't they already somewhat spoilerize that themselves? In one of the newest trailers, I think... it might have even been both of them, actually; if not, then it was probably the JP trailer but there is a clip in it that I believe pretty much answers that question. Because I remember thinking it was probably a little too spoilery to really be showing rn, even out of context.

Edit:
Although now that I re-read your question, I suppose this doesn't actually answer it properly. I mean, it's possible that they do add an extra event or something like that in order to prolong it, but it seems like something that maybe can't be helped entirely. It'd be cool if you could do something to basically unlock more time with her though, I would like to see something like that. And, I will say, we haven't seen anything that necessarily confirms one way or the other if it still happens as soon as it used to or not yet.

Spoiler:
That trailer grave has me confused because I seen a few people say the trailer spoiled the MC's death but then someone questioned if it was Nina's and myself do not remember enough to know whose grave it actually is. Though if you say it is Nina's grave then I think I'm more inclined to believe you as you appear to have a better memory on the game.

It would take some effort but I think it could be done if Marvelous is willing to put in the work. The doctor can still move to the valley with the very purpose of helping Nina live longer and the couple can both move to the new home as a better place for her health. Marvelous put in enough effort to add Gordy and some other new events so I wonder if they will here if it means making the setting appear more friendly like the other changes they've made.

Spoiler:
Oh... well if you don't remember then I feel bad talking about it, but I don't see it being the MC's. Not just because he's standing in front of it looking down at it, which would be weird if it was his own, but also because the location and shape of the headstone both match up to how I remember it being in the originals.

But I always thought that it would've been neat if she could've got to see their new home too and wondered what she'd say to being shown your child and stuff like that, so I would also like it if they held off on it for at least another chapter or two more myself. It is strange that they won't let animals die but the little ole lady still does. Although, I can appreciate that it does still happen too. It sort of ironically makes the world feel a bit more lived in and gives weight to the story being that it's a full life you're living in this world.

Spoiler:
It's ok, don't feel bad. I'm so sorry my mind was scrambled lol but I meant they said it could be the MC's spouse, sparking thoughts from the person questioning they could die before the MC. The more I think about it the more unlikely I think Marvelous would switch it up like that because I cannot see a good reason why as it could actually make the player more sad maybe. Back to Nina, it would be nice if she at least get to live longer, the seasons are fast in this game and with years shorter 1 year felt to soon. As you said they let the animals live now and yes it makes it more grounded but at least let our children meet her.
Top

i am so excited for this. i just found this out last night and i was jumping around my apartment screaming with joy. AWL was my first HM game, and i have so many memories with that game. I am SO excited for this remake!!!!!!!!
Top

Huh, is that, erm, structure in the background of the doggo screenshots supposed to be a revamped storage shed? Or perhaps it’s a mix of the storage shed/tool shed? The reason I’m asking is because the object to the left of the wardrobe-looking thing looks like a refrigerator or freezer—a place for Pui to steal our milk from, though I’m sure he’s too good for that now

Yeah, I'm actually not entirely sure of what that is myself, because everytime we've seen it, it's looked different. You're right, the fridge thing does seem like it'd be the new Dairy Storage. Although, there is a picture on the website of something else that looks like it would be too, and it appears to be a different machine to that one. The one on the website almost looks more like something Daryl would've created, honestly. And I'm pretty sure the wooden thing is just a garden tool cabinet, despite maybe looking more like a wardrobe. I sort of doubt that they'd put your clothes outside lol... but they might could do, you never know. But so, it does look like it might be a mix of both buildings, like you suggested.

We have seen the Fertilizer Maker in what I thought was that same location before, but it's obviously not there in those dog screenshots. They've also shown the shipping bin alongside the um... order logbook underneath a similar tin roofed setup to those, but it was off to the side of the barn across from there. So, maybe we can move them around? Idk.

It is a novel idea to have everything outside in the open like that though, so you can just walk up and access it without having to go into any extra buildings. So, I get why they've done that, but I do kind of think I'd still prefer just having a proper dedicated place for everything rather than having it all sprawled out in the front lawn like that.


Here are the new JP screenshots for today, showing off the cat: 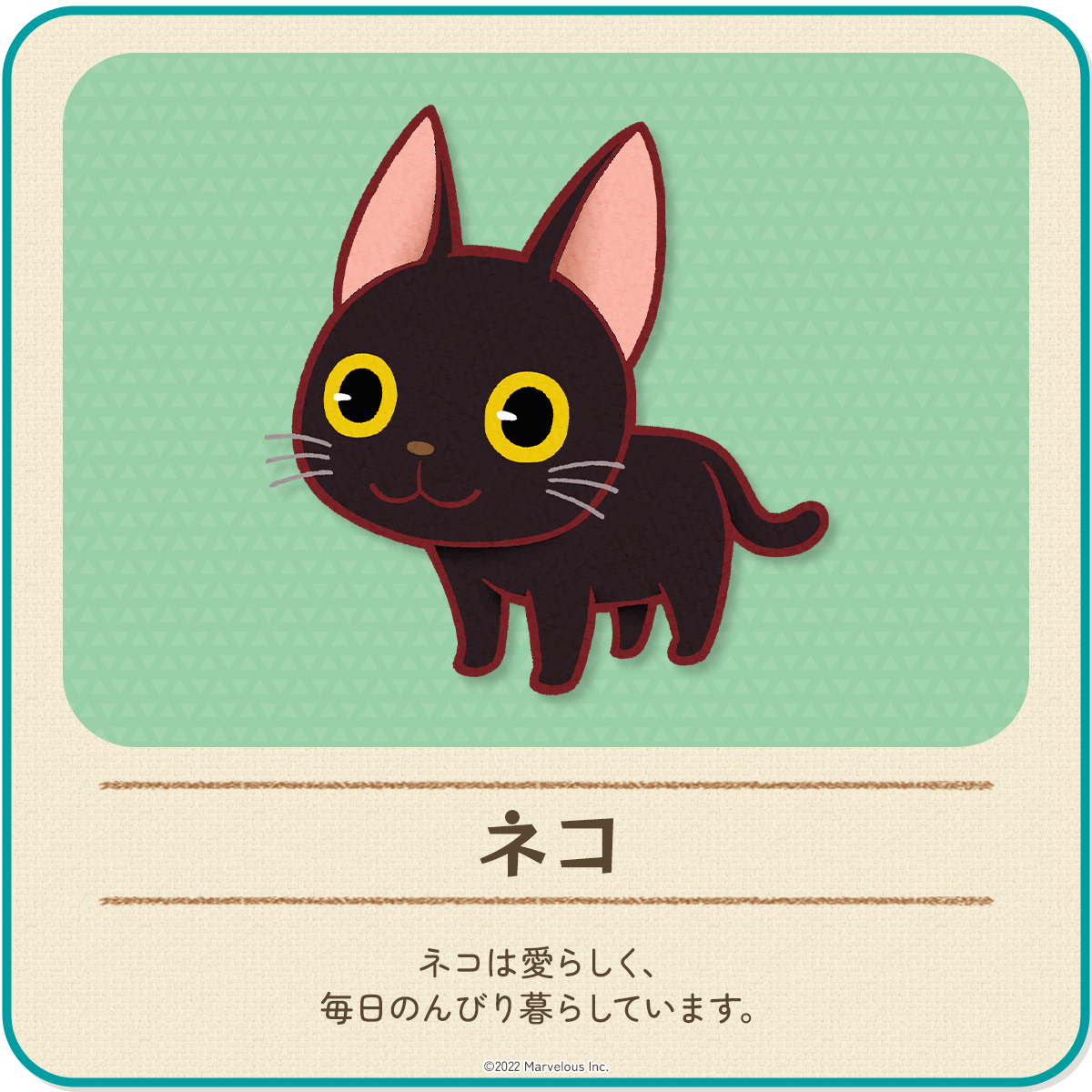 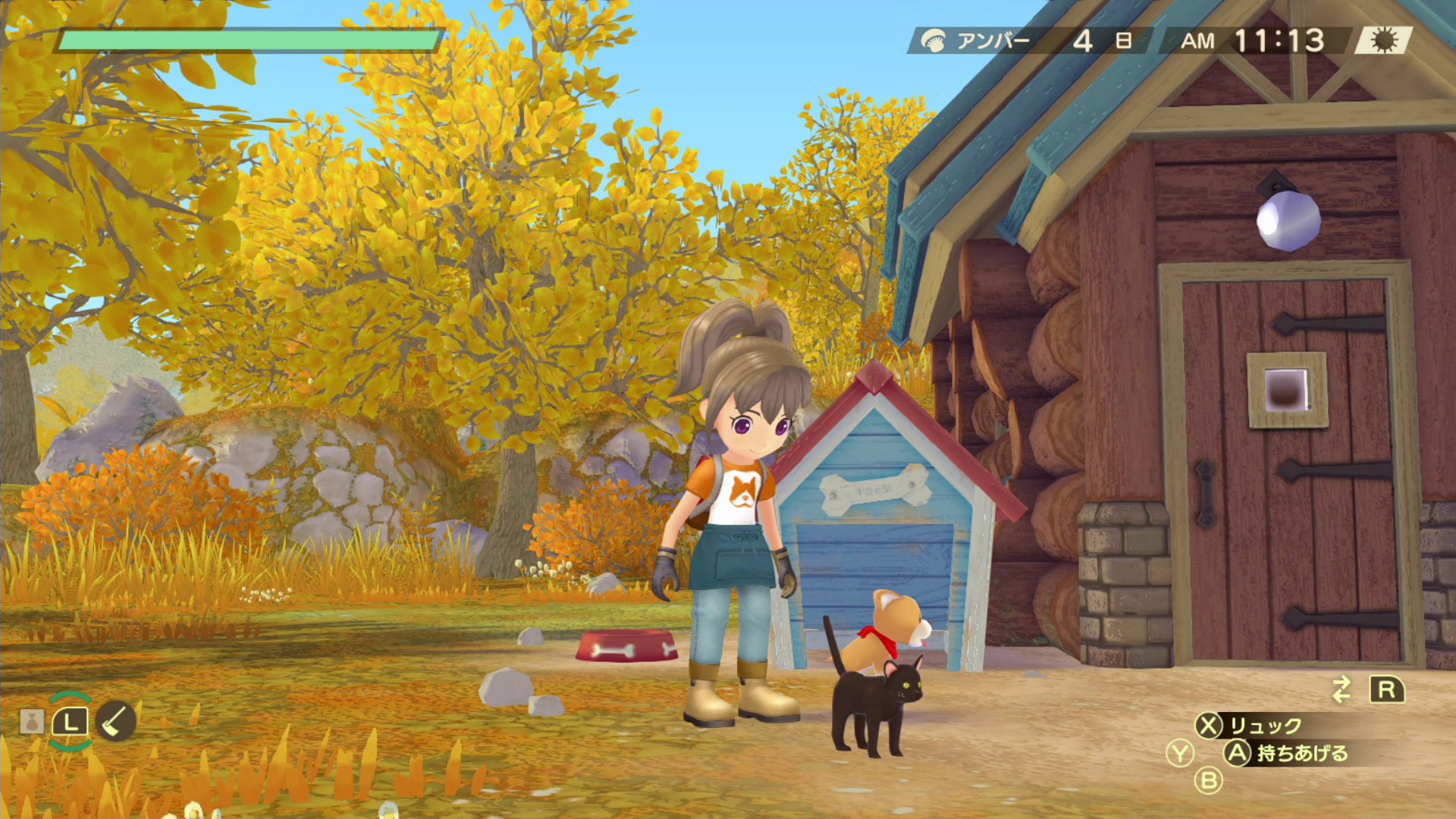 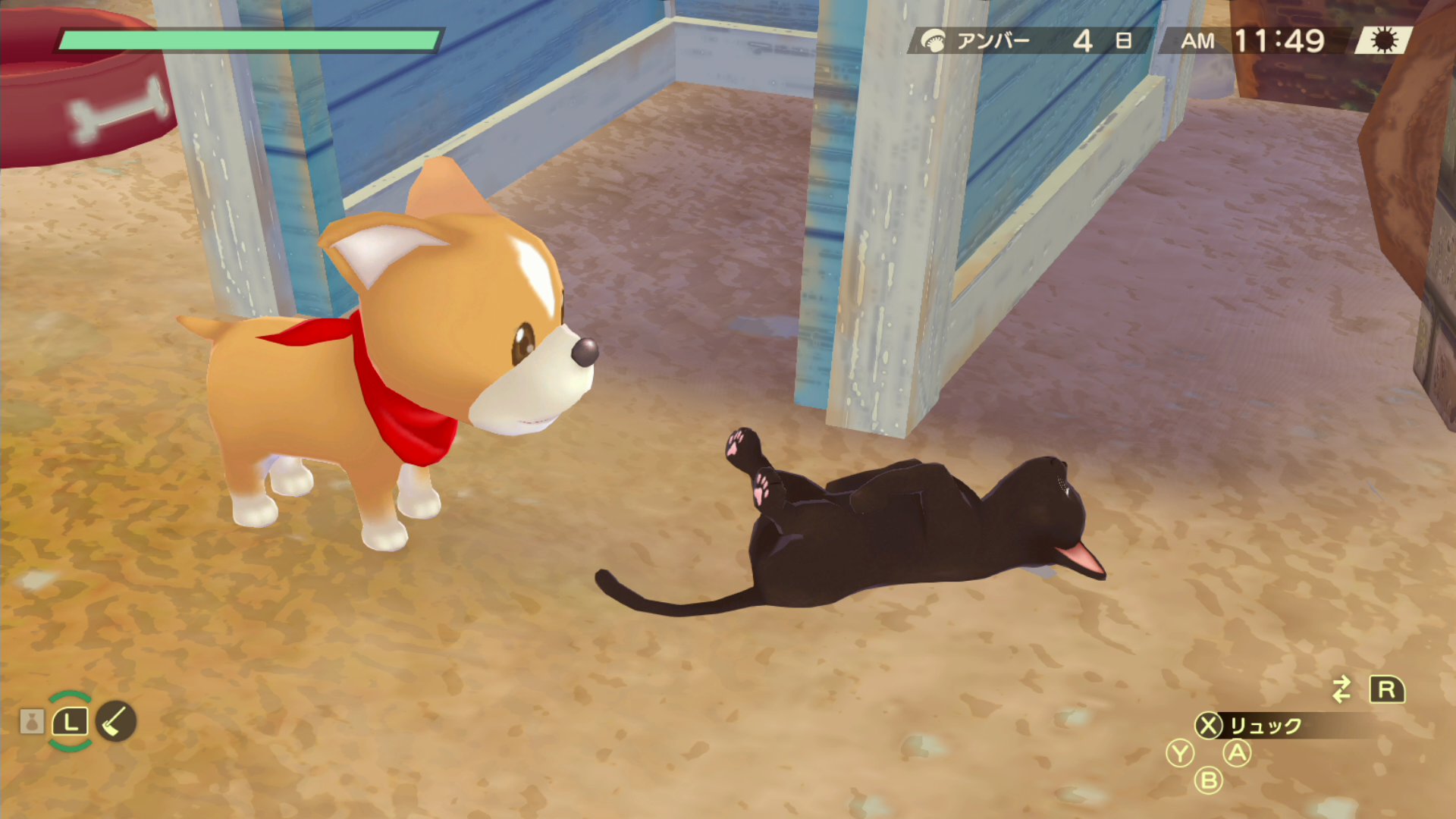 Ownnn the cat is so cute!!

I hope we can bring the cat in the house, I always felt awful leaving them out in the rain

You could keep the cat in the house in the original game. I think it was just the dog that refused to go inside the farmhouse. But with the cat, I always kept it in the child's room so I could show it to the daughter to influence her more towards animals, haha.
Top

Here are the new screenshots for today, the horse: 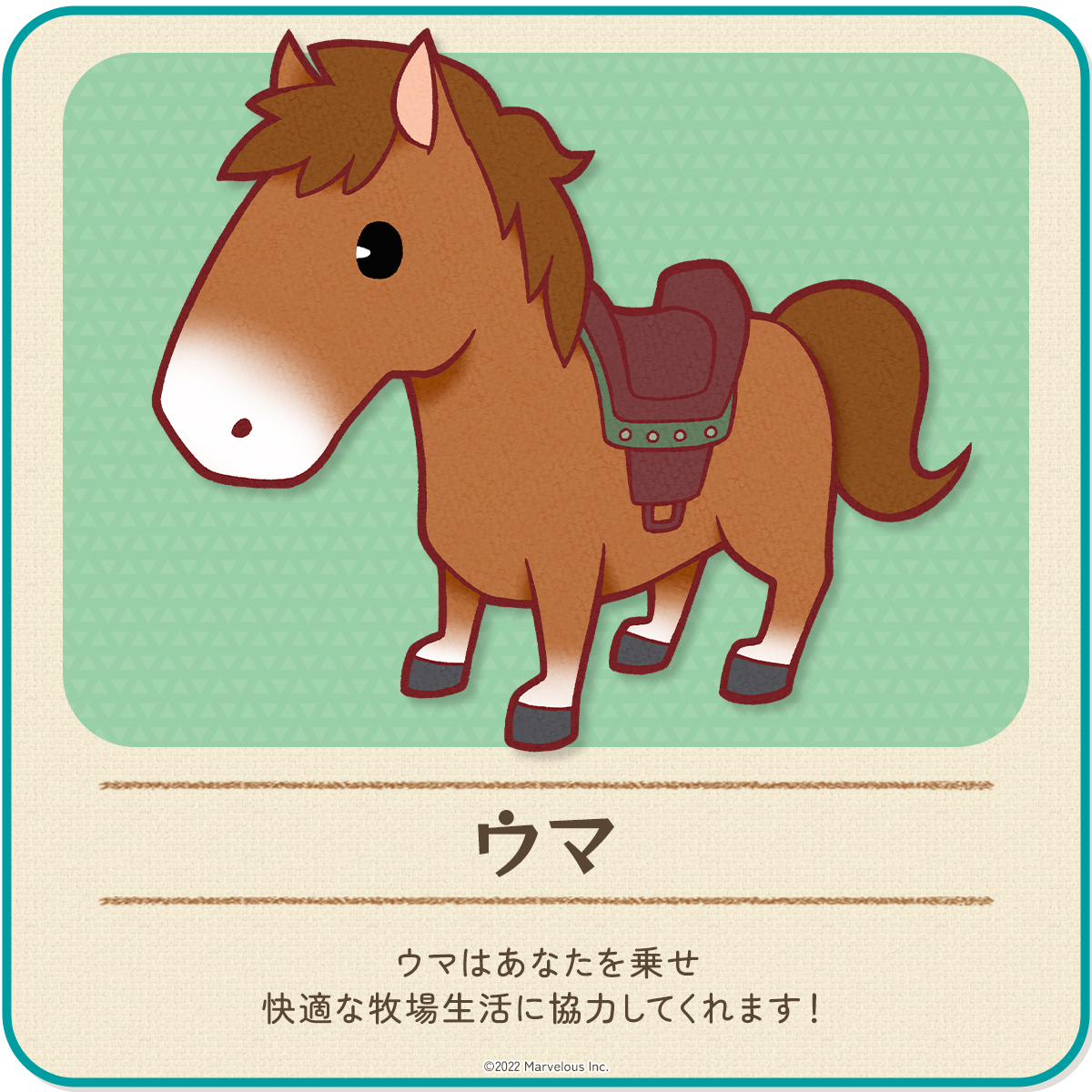 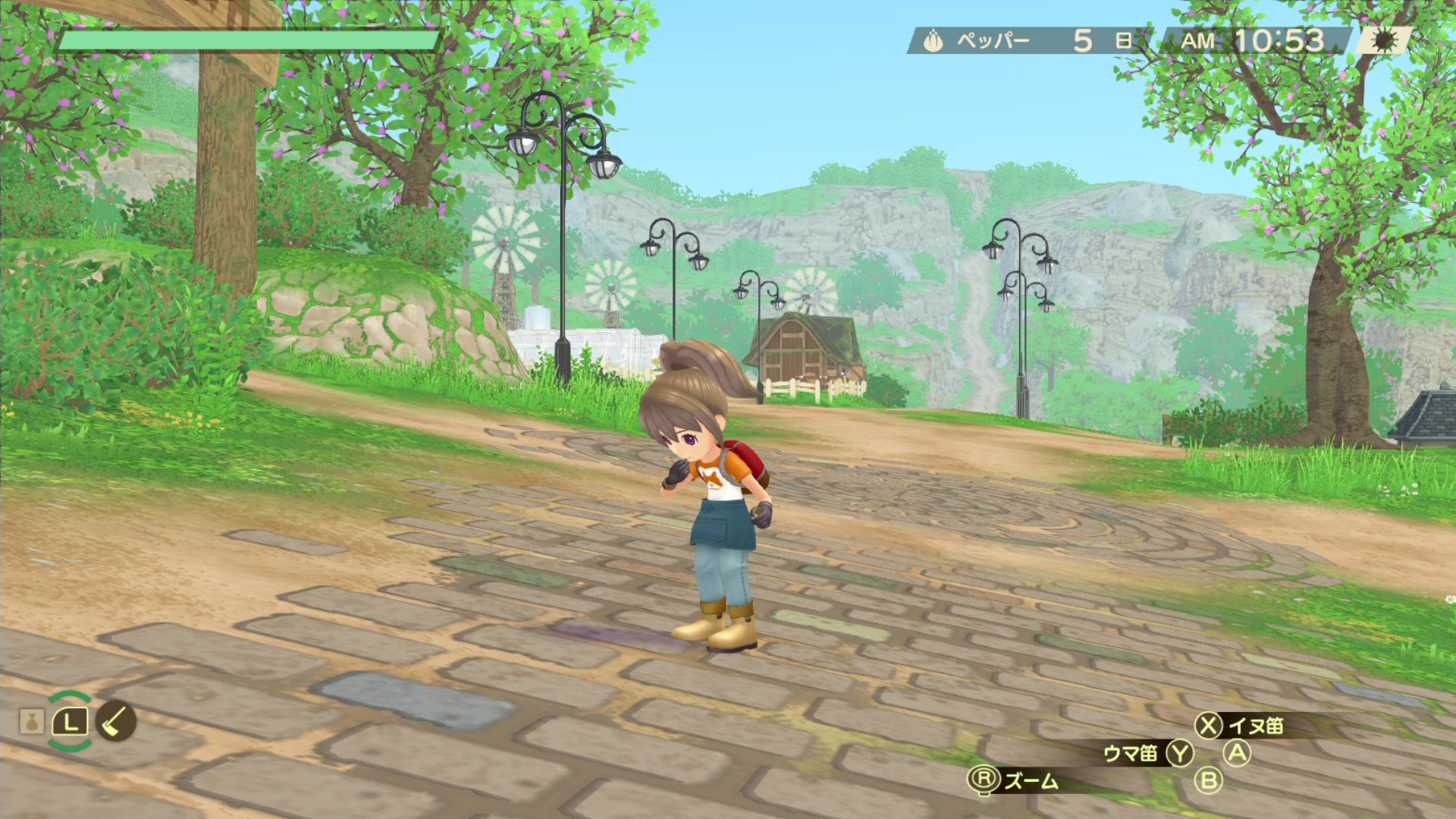 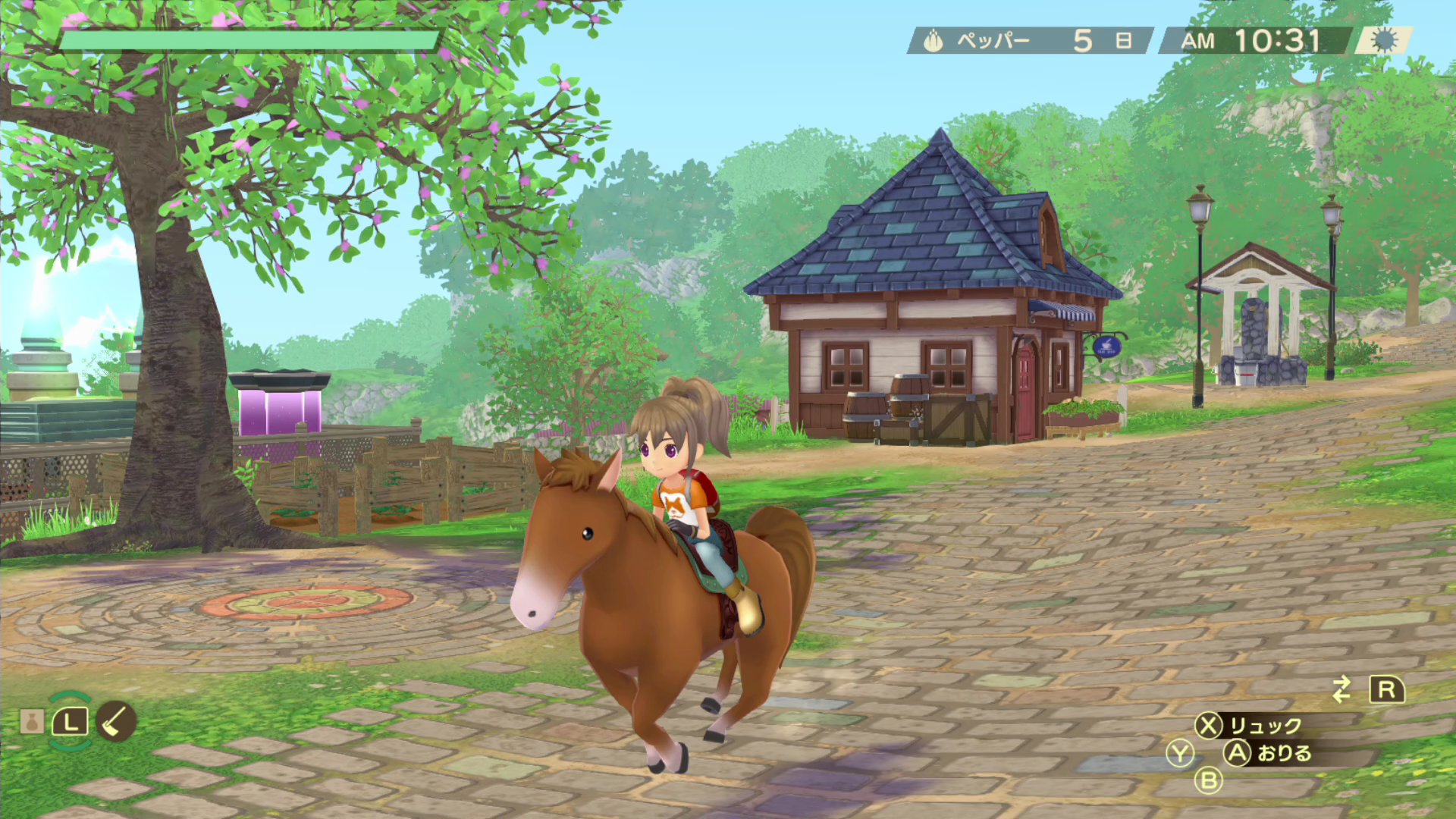 Horses will carry you around and help you live comfortably on the farm. The second image is obviously calling for the horse, while the third one is riding it... even though, the third came before the second so they rode the horse to the café, hopped off and then walked back home to call it lol. But in the second image, you can call the dog with the X button and the horse with Y. And then the third one has rucksack on X and get down with A while riding.
Top

Seriously? Didn't it have a pet house or something?

Off-topic: is your avatar a drawing from Ito-sensei?

I can confidently say the horse is the first thing about all of this that has actually mad me angry, lol. It looks terrible, hope they change it.

Also, yes, my icon is from the Ito story "The Town With No Streets"
Top

It's weird how the cows are more or less like in the original games, but seemingly all of the other barn animals are not and instead resemble the more cartoonish animals from recent games.

(Also, I don't recall the cat having a little pet house. I thought it was implied that the cat was a barn cat and lived and slept as it pleased.)
Top 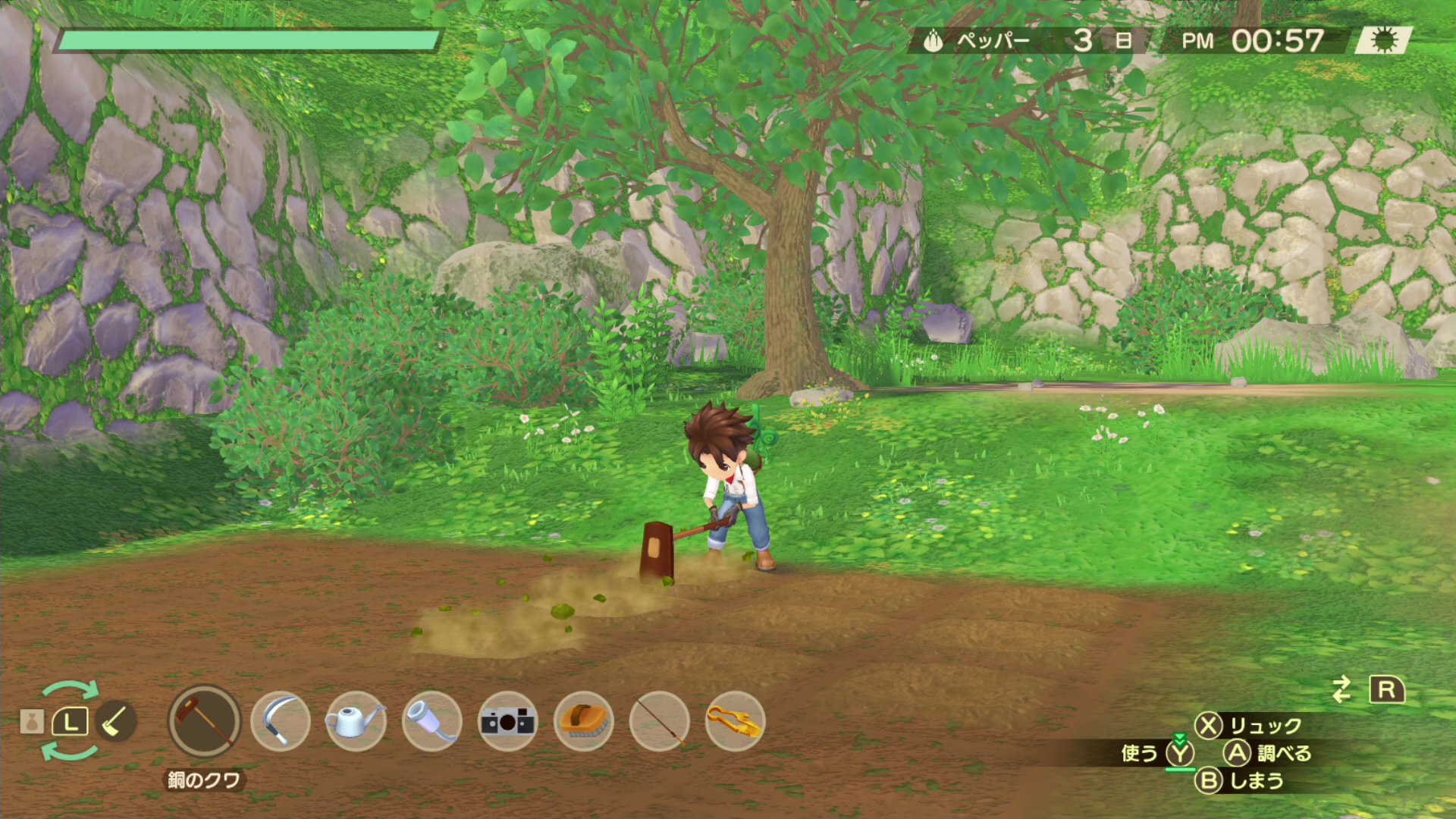 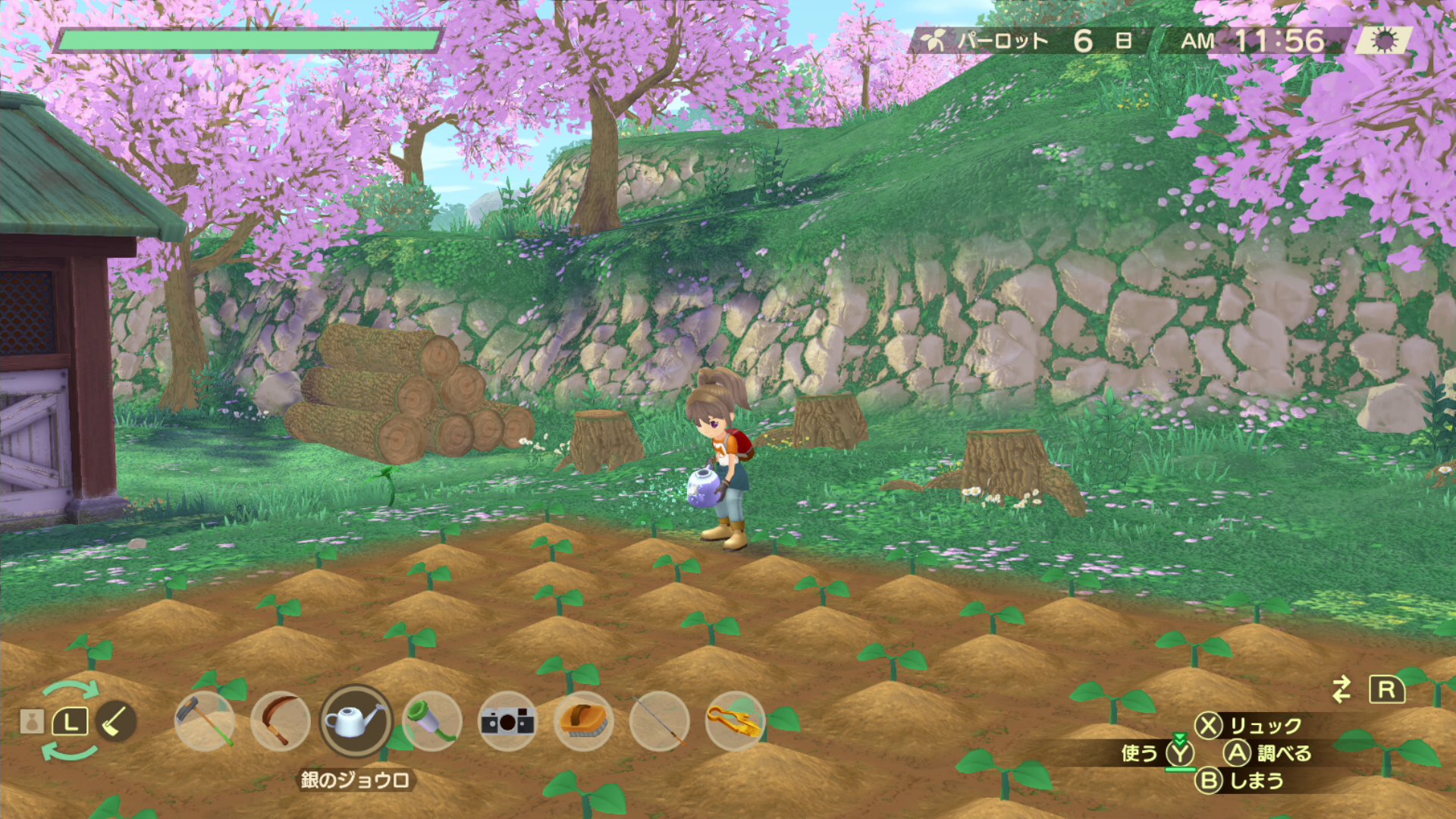 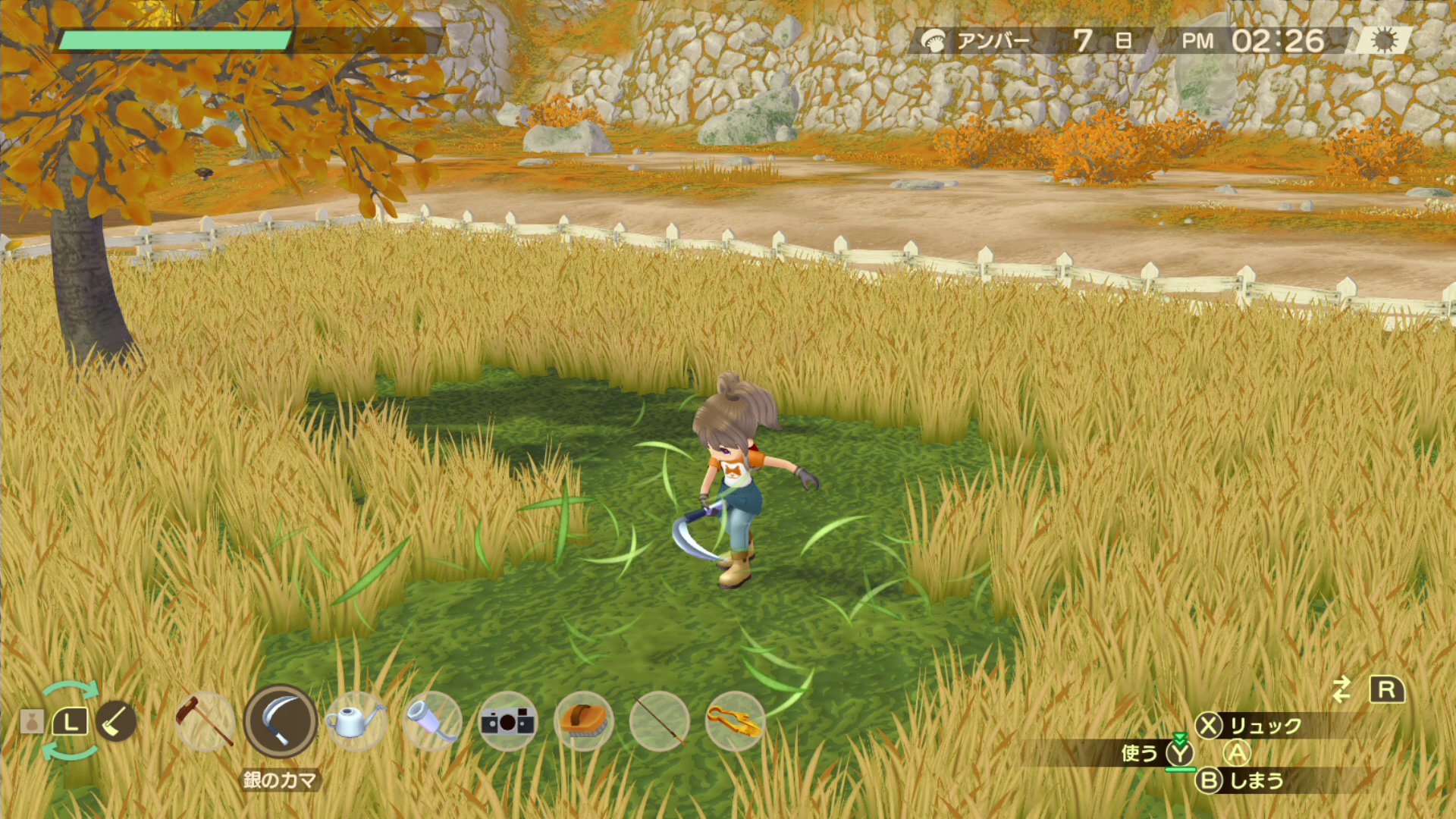 They don't really say much of anything more than that, really, just that here some of them are. So here they are lol.
Top

The Daryl mystery only grows and grows each day.
Top

Seriously, the longer we don't see him the more worried I get. I really hope he's a secret candidate.
Top

Reeeeee look at that kitty. Also yes, I agree that the horse looks vErY strange. It was so cute in the original

Ah, who else have they not shown? Dr. Hardy? I’m very curious to see what changes they’ve made to Daryl…
Top
Post Reply
695 posts

Return to “Story of Seasons: A Wonderful Life”