In collaboration with Nintendo, a set of new crops have been added that you can grow on your farm. The Super Mario crops are an uncommon seed that you can buy from the Wheat Country vendor at the Trade Depot. When the country visits the Trade Depot, there is a 30% chance that Kenneth will have a mystery seed for sale when you talk to him. He only has one for sale at a time and it will cost 1000 G. Since it is suppose to be a mystery, there's no way to know in advance which of the Super Mario crop seeds you've bought. You can be growing more than one mystery seed at a time.

When grown, these crops will affect all crops within its designated area. For example, if you grow a Super Mario crop on your main farm field, it will affect all the plants in the main area but not the ones in the western area. 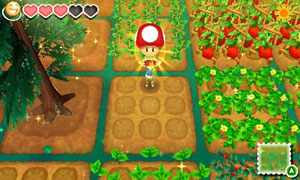 This fungus is very convenient! When you harvest the Super Mushroom, all of the plants you are growing in the designated field area will instantly mature by two growth stages. The Super Mushroom will make all of the crops grow super fast!

The powers of the mushroom will even affect trees that you might be growing in the area. Lumber trees only have two growth stages, so all of the lumber trees you are growing will be mature and ready to be chopped down for lumber. Fruit trees take three growth stages, so any just-planted fruit tree seedlings will mature to stage two, and any fruit trees that happen to be in stage one will jump to mature stage three.

This can also impact crops that regrow their yield such as tomatoes, cucumbers, corn, and the like. If you have a mature Super Mushroom ready to be picked, try to harvest all of your crops that regrow their products before picking the mushroom. For example, harvest your Pineapple before picking the fungus and once you do, all of your Pineapple will be regrown and ready for harvest again. Nice!

Besides making all of your crops grow, the Super Mushroom will add 6 to the number of crops you harvest that are affected by its magical mushroom madness. If you harvest a plot of 9 crops, then you'll actually end up with 15 (6 + 9 = 15). This doesn't affect lumber trees though, but it does affect fruit trees and will result in a tree yield of 11 (5 + 6 = 11).

The Super Mushroom does not make other mystery seeds grow super fast (drat!) 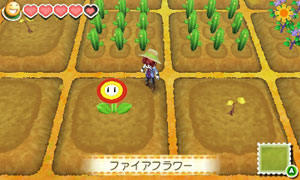 Depending on what is around when you harvest the Fire Flower, two different things can take place. For crops that have wilted, the Fire Flower will burn all of the dead plants so you don't have to cut them down with your sickle. This can be handy for the first day of a season when you have to clear the dead crops from the previous season so you can plant new crops.

The Fire Flower does not burn crops that are not wilted. For healthy plants and trees, the flower will increase the Star Rank of the plant's products by 30 points. You can then carry over the Star Rank to the next generation of crops by using the Seed Maker to convert the leveled up crop into seeds for planting.

The flower will not burn down trees, since those plants never wilt. If a plant is at its maximum Star Rank already then the Fire Flower won't add anything more to the plant's Star Rank. 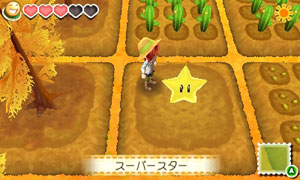 This crop won't turn you invincible so you can run through the fields knocking over your animals, but what it will do is increase the amount of time a crop stays fresh before it drops to a standard status. Normally when you harvest a crop, and only crops, they will be given a fresh status. This freshness allows you to earn a little bit more profit when you sell the crop to the Trade Station vendors. After 3 days of being picked, a crop will lose its fresh status and just become a normal crop (e.g., a Fresh Turnip becomes simply a Turnip).

Harvesting a Super Star before picking your crops will make all of your harvest crops retain their fresh status for 60 days instead of 3 days. This will only affect crops that you harvest after you have picked a Super Star. For example, if you have a Tomato plant that isn't producing any fruit, then picking the Super Star will do nothing for you at all; if the Tomato plant had ripe Tomatoes on it, then activating the Super Star and then picking those Tomatoes will result in the extended freshness period.

With the Super Star crop, you just need to ensure that you actually have crops that you can harvest before you pick the star to activate its abilities.