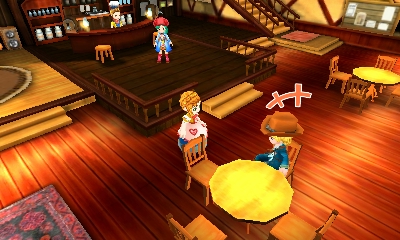 Brad welcomes you to his restaurant, although he has a lack of enthusiasm about it. Turns out that Carrie is chatting with Wayne over at one of the tables. Brad knows Wayne isn't a bad guy, but the postman is a bit too talkative with Brad's spouse. Wayne is known to have a way with words. Anyone can become wrapped up in a conversation with Wayne. The postman has great looks, personality, and is great at chatting. Brad wonders if perhaps Wayne has any weaknesses. He must discover what that is!

You head over to the table to sit with Wayne. The two of you are enjoying your meals when Carrie comes by with a special treat from her spouse: a bowl of coleslaw! Wayne doesn't seem too interested in the bowl now sitting on your table. In fact, he looks a little strange...

Ah ha, well he gives up. It isn't the coleslaw, but the yogurt used in coleslaw.

Choice 2: Are you already full?

Wayne says that isn't the case. Actually, don't laugh, but he doesn't like the yogurt that is in coleslaw.

Long ago he had many things he liked and disliked to eat. Little by little he would make himself eat the food he didn't like. The reason why is because if he was ever received food from someone, he felt it would be rude to leave parts of it behind. You let him know that you could tell by his face that he didn't like the coleslaw. Wayne says he was trying his best not to make it obvious. Wayne says you're a good friend, but doesn't want news of his weakness to leak out.

After the meal you return to Brad, where you can choose to expose Wayne's weakness or keep it a secret. If you tell Brad about the dislike for yogurt, Brad will fell bad for putting yogurt in his coleslaw all this time. But he has second thoughts about this and now doesn't feel good for search out a person's weakness. If you keep it a secret and tell him you couldn't find anything, Brad will tell you that's probably a good thing as he doesn't want to have a guilty conscious about it. Either choice won't affect your friendship with Wayne, Brad, or Carrie.