There are three ways to catch fish to sell through your shipping bin. You can go trapping for fish in Lulukoko Village, use a fishing pole to catch fish in any of the area waters, or you can raise your own fish and pearls by using Fish Hatchery boxes. The pole fishing and fish trapping will help you create inventory that you can use to grow on your own farm using the hatchery system.

The only place you can catch fish by using a rattan basket is in Lulukoko. Once you raise Lulukoko's Town Link Rank to Rank D, the Polepole shop on the beach will sell Fish Traps for 300 G each. Buy a basket and then walk over to the rock-protected area on the shore. Press the A Button on your Nintendo 3DS to place a Fish Trap into the water. The next step is to wait for items to get caught in the trap. You can then walk away and check back on it later. 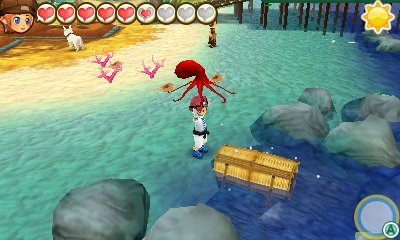 The items and fish you can collect year-round from the Fish Trap are:

The Fish Trap will break after you harvest from it three times. Once it breaks, simply place a new Fish Trap in the water and wait again.

On Spring 8 of your first year or later, walk from the Crossroads to South Westown to meet up with Uncle Frank. He tells you how you can go fishing in the stream to catch fish to sell or cook. Frank doesn't give you a fishing rod though; you have to go to Gulliver's in North Westown to buy a rod for 300 G.

The fish you catch on Connection Island don't count towards the fishing achievements or your discovered fish list. There aren't any island-specific fish located here that can't be caught in the main game; basically, you do not have to go to Connection Island to catch all of the possible fish in the game. 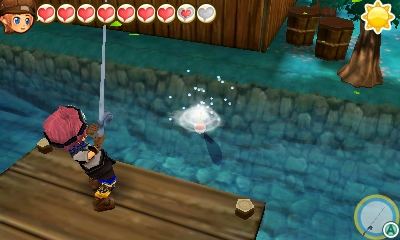 Fishing is pretty easy to do. Just equip the fishing rod, stand anywhere next to water (it does NOT need to be at a fishing dock), and then press the A Button on your Nintendo 3DS to toss your hook into the water. When you see the fish grab the bobber (there is no audible sound you can react to), press the A Button once again until you reel in the fish. No need to press the A button over and over!

You can use fish bait to entice the fishies to bite at your hook. Bait can be purchased at Polepole in South Lulukoko. You can also craft it by bringing the right types of fish and 10 G to Jambalaya in North Lulukoko, 99 G and Up in North Tsuyukusa, and Gulliver's in North Westown.

Bait must be attached to your fishing rod to use it. Visit Ludus' shop to ask him to attach the bait to your rod. You can attach up to 99 of a single type of bait, which will automatically be used when you cast your line. It will remain attached until it is used up or you ask Ludus to remove or attach a different type of bait. The bait options are:

There is also a fishing bonus status effect that will increase the bite rate.

The effectiveness of the fishing rod determines the kinds of fish you can catch. Some fish require you to have a minimum effectiveness before they appear. Upgrade your effectiveness at Ludus' shop.

Super-large sized fish will be catchable at certain fishing locations after you have completed the requirements for them to appear. For whoppers, you need to:

Some whoppers even require you to catch another whopper before they'll appear!

Whopper fish are not tossed back into the water when you catch them. You can keep these fish and even use the Fish Hatchery to produce more whoppers to ship for profit.