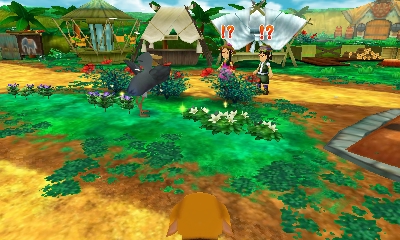 Mithra and Lotus are observing the shoebill bird from a distance. Mithra is impressed with how amazing it is, although timid Lotus is fearful of its massive beak. Mithra wants to try and get closer to the bird. She's glad they came to this village, as there's so much ecology to study and record!

Suddenly the shoebill turns around and spots the two researchers hiding in the brush. It gets a little bit closer to them and wonders what Mithra plans on doing with the pen and paper she has. Hmph! Lotus thinks the bird is angry at them. The shoebill gets closer; perhaps they're trying to draw it? Oh wonderful! The shoebill continues to stand there in front of the researchers.

Lotus wants to run away sooo badly, but Mithra stands her ground. The bird wonders why Mithra isn't using her pen to write anything. Ah, maybe they need inspiration to draw! The bird shows off by spreading its massive wings, startling Lotus (as expected) but Mithra too! Mithra gives the order to escape at once, and they both run off. The shoebill is puzzled; it was just trying to be nice.