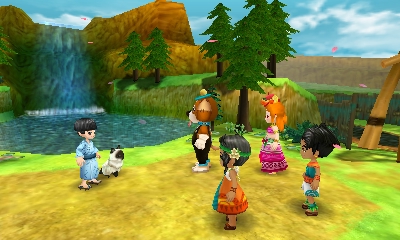 You overhear Schalk and Alma sounding a bit distressed. Schalk explains that they found this stray cat and are wondering where its family is. Alma tried to feed it rice, but it is too scared to eat. Schalk asks if you would help search for its family. The three of you look around the village but don't have any luck.

As you decide what to do next, Woofio appears and asks what is wrong. You explain the situation to Woofio. It's a good thing he's arrived! Woofio sniffs the cat and uses his nose to determine its story. He says that while the cat doesn't have a collar, it is kept as a housepet. Its owner must be looking for it.

Everyone heads out to the Crossroads, where a young man from Tsuyukusa is calling out for his pet, Jiro. Auu, it is such a happy reunion! The kids are glad that they found the cat's family. The man thanks them for locating his cat and then returns home with the cat.

Schalk is amazed that Woofio was able to understand the cat just by using his nose. No need to fear, Woofio the animal trainer is here! The dog man tells the kids not to worry and tells them they can head home. After the kids leave, Woofio admits that he doesn't think he did all that much. When one wants to go home and can't return, one tends to get lonely. Woofio apologizes for suddenly being so serious, but you don't want to let it go.

Woofio explains that he wanders from place to place because he can't return home. It is okay though, as all the animals of the world have become his friends. You give him a comforting pat on the head and he thanks you for being such a kind person. Though, he warns you that most people tend to keep their distance from him. You are a bit unnerved, but he says not to worry about it and then leaves.

As he returns to town, Woofio wonders why he let you comforted him. Ug, what was he thinking?! You're a normal person! He tells himself from now on he won't let anyone close. It is for the best. 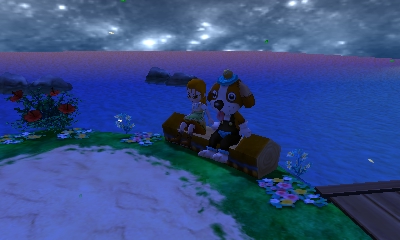 You find Woofio climbing around the ancient ruins in Lulukoko, but he loses his footing and falls down to the ground! You run over to see if he is okay, but Woofio acts like nothing happened. Perhaps you were dreaming that he fell? You do not believe it though. Woofio says he can't lie to you, and asks that you don't tell anyone about what happened here.

The two of you head to the beach to sit down for a bit. Woofio admits that before when he told you that he came here to study animal training, that was a lie too. He actually came to Lulukoko to investigate the legendary village spirit. You probably see him as a man in a dog suit, but this isn't what it seems. You might not believe him, but there is nobody inside this dog suit. His body is actually the dog costume! When he was younger he met a spirit in a forest, and since it had been a long time since someone could see the spirit, it wanted to play with him. He spend several days playing with the spirit, but he admits it may have been longer than that. Eventually Woofio went to eat some snacks in a strange room, which caused the spirit to laugh much to the surprise of Woofio. One day he decided to go home, so he left the strange room. The spirit tried to stop him, but he ran all the way out of the forest to escape. As he was returning home he realized that he wasn't out of breath even though he had run all the way. That's when he saw in the reflection of a pond that a dog costume was staring back at him! Woofio tried to go back to the mysterious room but it was gone.

Since then he hasn't been able to go home. Instead, he had been living in the forest together with the wild animals, as the costume allows him to hear the animals' voices. He doesn't eat and he doesn't feel pain. That's why he wasn't hurt when he fell off the top of the ruins.

Woofio asks that you keep the secret of his empty body to yourself and admits that you're the first person he's told. Woofio then head off by himself. You are worried that Woofio is going to try and leave the village so you chase after him. Once you catch up to him, Woofio asks what is wrong.

Choice 1: I won't tell anyone

Woofio isn't worried about you telling anyone. If the secret ever came out, Woofio knows that you will protect him.

Choice 2: I will stay by your side

Even if he will never return to normal? Woofio asks you to stop; he doesn't want you getting close and asks that you keep your emotions to yourself. He can't bear the thought of never being able to make you happy.

Woofio is comfortable enough that he was able to confess his secret to you and asks again that you do not tell anyone. You're kind to sympathize with him, but because of his circumstances you'll just get hurt. It doesn't mean that he doesn't have feelings though; he's just afraid of losing his persona as Woofio the child-like animal trainer. Woofio says that he'll stick around as he tries to learn more about the Lulukoko Village spirit.

As you return home you bump into Witchie, who was apparently listening in on Woofio's confession. She always assumed that he was a magical creature made by someone in the witch clan. The spirit that Woofio was talking about is most likely a member of the witch clan. Witchie wonders if another spell can reverse Woofio's curse, but she can't do it. She's just an apprentice and her limited power means she doesn't have the strength to dissolve another witch's spell. Witchie detects your disappointed, but she clarifies that she can't do it right now, but give her a little bit of time to look into it. 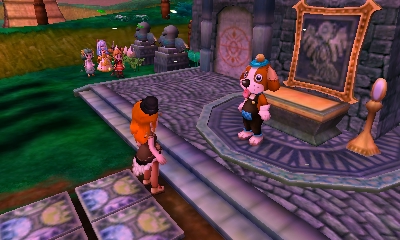 You are stopped by Witchie as you walk into your farm. She's here to talk about the dog-costumed man. She recruited Dessie and Inari to help out with the investigation and asks that you locate the dog guy.

You run off to find Woofio at the ruins, although he doesn't understand what you're excited about. While the two of you talk, the deities appear and use their powers to cast a counter-charm on Woofio. Unfortunately, Woofio continues to be a humanoid dog costume.

Woofio notices the light from the spell, yet he remains how he is. Witchie believes that too much time has gone by since the original spell was cast. These spells become harder to untangle as they are left undone. She is going to check with her aunt, the Witch Princess, as she doesn't even know how a costume can be alive. Even Inari recognizes the complexity of this curse and how difficult it will be to dissolve.

You are disappointed that they can't return Woofio to normal and start to cry. Woofio thanks you for trying to help, pats you on the head, and then says perhaps it is time for him to leave. He doesn't want you to be sad forever. As he leaves, in an attempt to stop him, you run after Woofio and collide, taking a tumble down the ruin's staircase. As you pick yourself up, you see magical stars moving toward Woofio...

The dog costume gets up off the ground and realizes that he got hurt falling down the stairs. He can feel himself breathing, he can feel a heartbeat, and your hands even feel warm! Woofio gives you a great big hug.

The deities at the top of the stars are perplexed as to what happened. Dessie thinks it is because you're a special human and must have some sort of magical power. Witchie is bothered by the affection you and Woofio are displaying and tells you to take it somewhere else.

Now that you're alone, Woofio is still getting use to his human body inside the dog costume. He is grateful for your faith in him. He's never had anyone believe in him and was scared, but your heart persisted. Woofio admits that he may have lost something more important than his body. You are his hero for helping him return to being human, and you've helped him regain his heart. Woofio doesn't know how he can ever thank you, but he wants to give you some sort of reward.

Choice 1: Stay with me forever

Woofio thinks he must have misunderstood what you were saying. Are you trying to propse?

If you confirm that you are, then you will present Woofio with the Blue Feather from your bag. He is in shock. Since he lived in the forest for so long and got to understand the animals, he's finding that human words are difficult for him, but he can feel that he loves you.

You tell him that he can take off his costume, but since he's lived with it for most of his life, Woofio is a bit embarrassed to show his real face. After the two of you are married he pledges to show himself only to you. 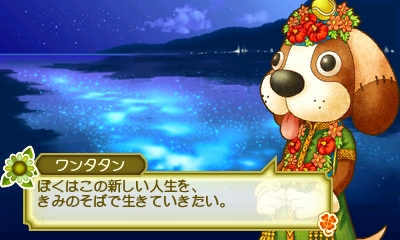 At this point the marriage ceremony will occur. The deities have been spying on you and Woofio, and decide to give you a wedding ceremony as a present. The "ceremony" is actually just a lot of dialog from Woofio's portrait about starting his new life with you, set to the backdrop of the same image used for the Lulukoko Sealight Night festival. Woofio wears a tropical shirt over his costume, but your character is not displayed. There is no audience, wedding dress, or first kiss.

After the ceremony and rolling credits, you'll return to your farm house. Woofio's friendship will be boosted to a red flower color, and he'll now live inside your farm house.

Choice 2: I'd do anything for a friend

Woofio says from now on the two of you will be good friends. He's glad to finally be able to have a real friend, as typically his only friends have been animals.

Woofio admits that while he could take the dog costume off, he's lived with it for most of his life and is a bit embarrassed to show his real face. He can't help but identify himself with dog costume and won't remove it even though he is human.

Choosing this option will mean you can never marry Woofio. Even if you raise his FP back to maximum (50,000 FP), Woofio will not accept the Blue Feather.