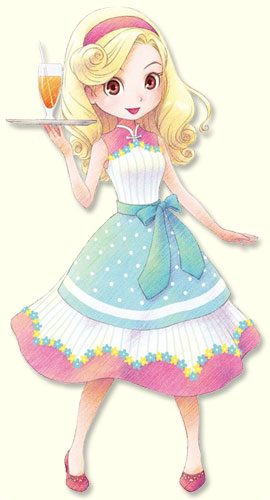 Blaire dreams of becoming a famous actress in the city, so she tries to keep up with the latest trends and fashion. Her family runs the only hotel in Olive Town. Though her mom manages the hotel café, Blaire found employment at the Capeside Bistro, where all sorts of travelers stop by for a bite to eat. Blaire loves to hear stories of living in the big city. She'll do just about anything to someday leave Olive Town to become a big movie star.

Schedule: Since the café is always open (except for on festival days), Blaire has the same schedule every day.

Special Gifts (+1200 FP): Wow! Consider my socks knocked off! To say I like it would be an understatement! 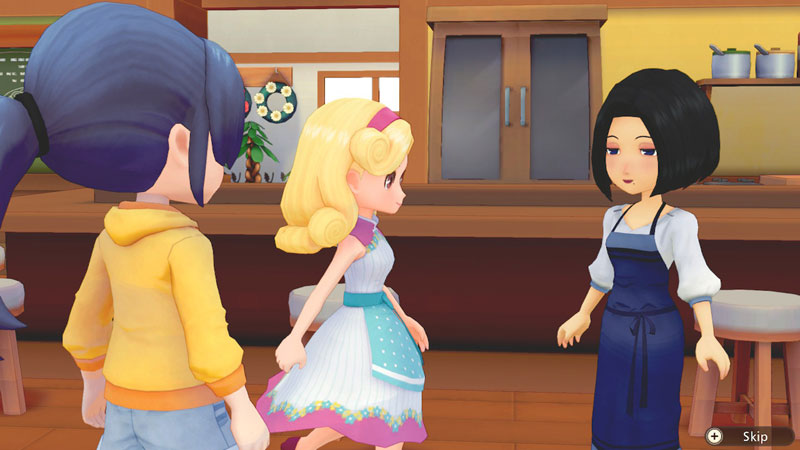 Misaki welcomes you as you enter the restaurant, and Blaire comes up to you, excited. She wants to know what you did before you were a farmer, when you lived in the city. Misaki tells her to get you seated before any chatting goes on, and Blaire brings you to a seat. She tells you that she's been to the city herself a few times, to visit the movie studio there. Oh, but she's not a groupie! Well, not THAT much of a groupie. She tries to watch famous people around there because she's chasing her dream.

Oh, she hasn't even taken your order yet! How about you try the daily special? Blaire picked it out herself!

Blaire brings up the subject from before, telling you she'd love to hear about it still. She's interested in your life in the city. Before you can respond, Misaki calls her back to work, and Blaire promises to talk to again. 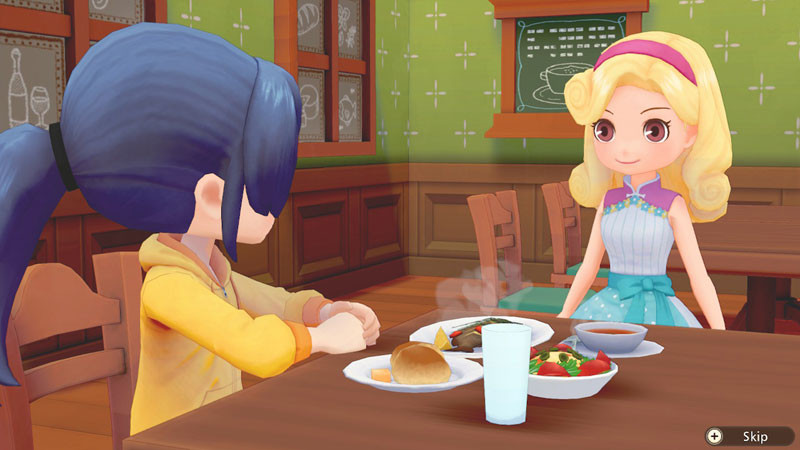 Blaire greets you, but seems a bit unenthusiastic. She asks if you'd like today's special or perhaps yesterday's special.

She serves you, and asks for a favor. She got into a fight with Jacopo, and wants you to apologize for her. She can't even remember what the fight was about anymore. Blaire admits she isn't angry anymore, and regrets demanding Jacopo to never come to the bistro again.

You go talk to Jacopo, who thinks that the whole thing wasn't a big deal. Apparently, he told her that her life had been failure after failure, and she snapped. Go figure. Anyway, it was his fault, and he should be the one apologizing, he admits.

You return to Blaire, who thanks you, and is glad to know that you're someone she can rely on. 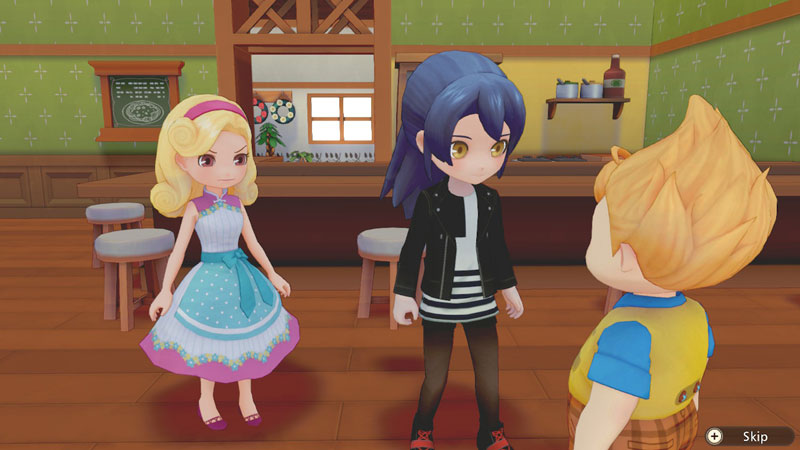 Blaire welcomes you, about to seat you, when Mikey comes in, asking her for food, saying he's tired of the stuff their mom makes. Blaire is upset at his presence, trying to tell him to leave, and that he's not a customer. He replies saying he's with you, and Blaire tells him once again to go home. He says he'll just go to Patricia's instead, and Blaire tries to tell him he can't just eat at someone else's house, but he leaves anyway.

She starts to complain about him to you, telling you that he won't stop bothering her with questions about love. Speaking of which, what's your type?

She's interested in seeing how your love life ends up. 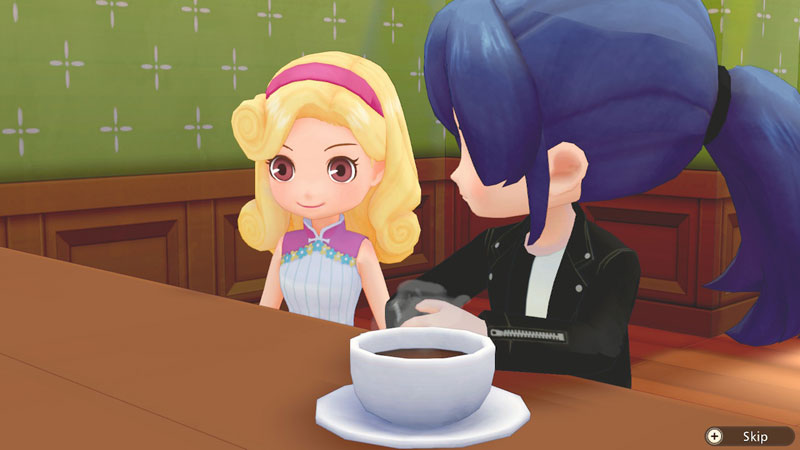 You walk in, and Misaki asks if you're here to eat or see Blaire. Blaire's on her break right now and is probably out talking to Jacopo. She offers you a free coffee while you wait. She sets you down and starts to chat with you, mentioning your life in the city. She says that Blaire can be flighty and needs someone to keep an eye on in. The boys worry about her because of that.

Misaki explains that Blaire is deperate to make something of herself, and because of that, she was over the moon when she heard you came from the city. She starts to tell you that Blaire got a business card from a shady movie producer. Before Misaki could talk more about it, Blaire returns to the café. Misaki asks what Jacopo wanted, and Blaire says he was talking about life and the future; a bunch of stuff she didn't understand.

Misaki tells you that Jacopo believes you're going to snatch Blaire and take her away. It's none of her business, but Misaki feels that you are the best candidate. Blaire, in all her infinite wisdom, assumes that you're auditioning for something, too. She hasn't told anyone yet, but Blaire has a dream. She starts to tell you about it and then stops because she doesn't want to jinx it. Instead, Blaire asks if you would want to visit the city with her someday. You could go shopping and have a nice lunch together! Misaki reminds Blaire that she's supposed to be working here. 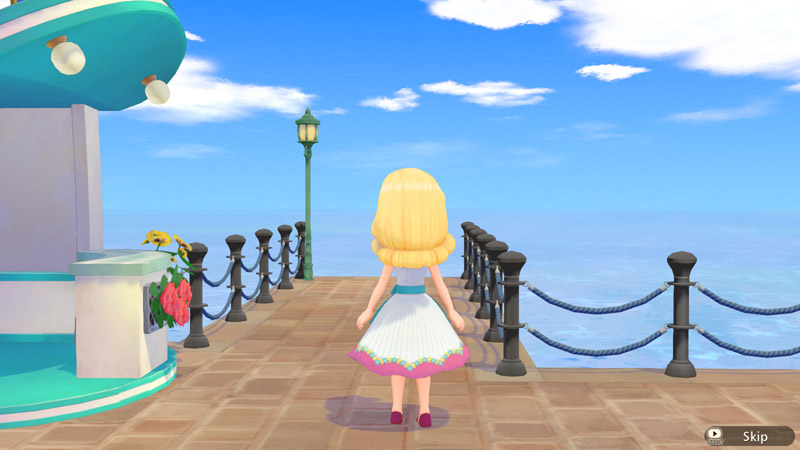 Jason, Mikey, and Misaki are all talking. They want to know if you've seen Blaire. Misaki noticed she dressed very nicely before leaving, so she assumed Blaire had a date with you. Jason says that Blaire never hides dates from her family, but she told everyone to mind their own business this time. Blaire must be hiding something! Mikey says that before she went to bed last night, she mumbled something about today being a day that would decide her future. All at once, everyone realizes what's going on.

You all rush to the dock to catch up to Blaire. Jason and Misaki question her about the supposed record company producer. Misaki tells Blaire she can't trust people who want to meet one-on-one like that. Blaire replies that Misaki is worrying too much! The record producer told her he could talk with the audition judges to make things easier for her. Misaki is unconvinced and tells Blaire that if she can't do a single audition on her own, then she can't say she's "chasing her dream."

Blaire has always complained that her life is a series of failures. Misaki is convinced that the reason why is because Blaire is always trying to cheat her way through! Blaire needs to make a genuine effort and take it one step at a time. Misaki has never seen Blaire sing or dance; she's just a girl with pretty looks! Ouch...

If Blaire insists on meeting this mystery producer, Misaki insists on accompanying Blaire. Even Jason is comfortable with that idea. Blaire is so annoyed that she decides NOT to go. Are you guys happy now?!

Misaki tells Blaire that they're returning to the bistro for a nice, long chat. Blaire complies with her boss' order, and they both leave. Jason and Mikey are glad that Misaki was able to stop Blaire. 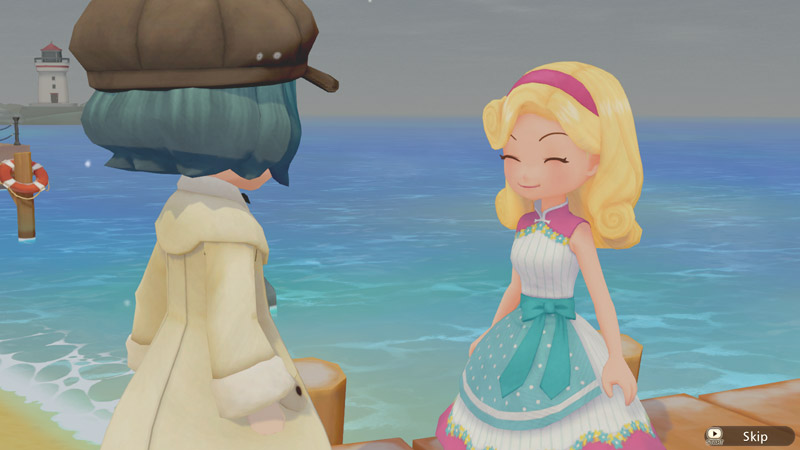 Blaire takes you to the beach, where she confesses that she has fallen for you as well. It has been that way since the moment you met. Blaire wanted to reveal her affection but didn't know how to put it into words. She didn't expect that you would confess before she did! Blaire is excited about the dating possibilities. Movies! Shopping! Dining! Or rent an amusement park just for two, riding the merry-go-round at night. Blaire realizes she's getting carried away. Nonetheless, she's confident in the success of your new relationship. 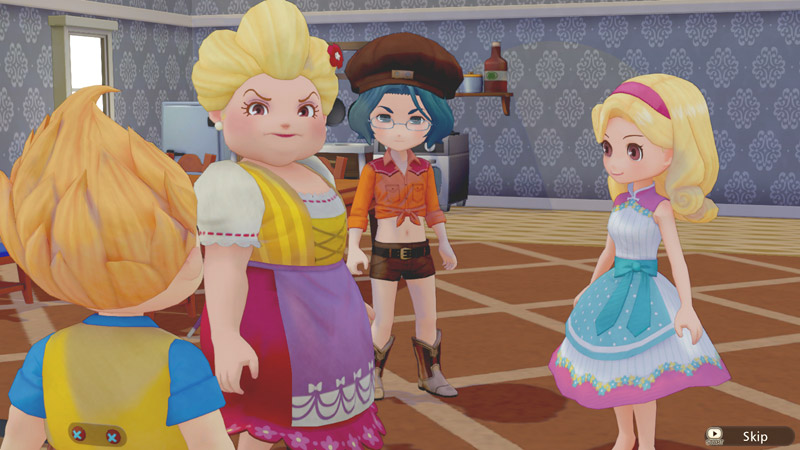 Sally welcomes you and tells you that Blaire has already left for work. She continues sorting her mail when she notices a letter for Mikey is in the pile of mail. It's a letter from a record company?! It turns out Mikey was accepted to be a boy band member?! Sally has no idea that Mikey was into show business like his big sister. Mikey begins to worry that he might not be a good enough singer or dancer.

Blaire stops to see if any letters arrived for her; she had waited for the mail instead of going to work. Sally explains about Mikey's recent boy-band invitation. Blaire is excited because she was the one who signed Mikey up! Blaire had initially prepared an application just for herself, but she ended up making an application for her little brother, too. Mikey is a bit excited about becoming a celebrity. Though Blaire is a little sad that it's her brother and not herself, she's still excited for him.

Sally puts her foot down and rejects the siblings' plans. Mikey's only a kid! Sally forbids him from stepping onto a stage until he's at least 20 years old. He should be focusing on his studies right now. Mikey understands where his mom is coming from and promises to wait until he's older. 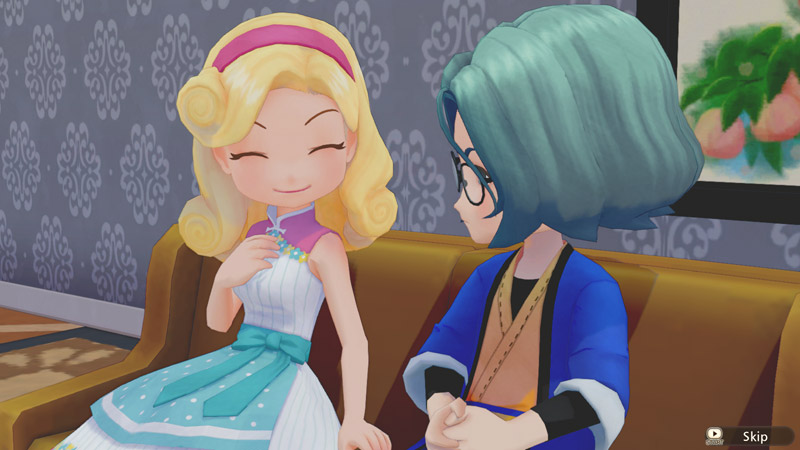 Blaire feels a little blue and asks if you could cheer her up. She explains that she went to the city to try out for a movie part. Misaki went with her to the auditions, which did not turn out the way she expected. The audition was both difficult and humiliating. Blaire realizes that Misaki's opinion of her poor acting, singing, and dancing skills may be right on the mark. While the interviewers asked the other participants about their abilities, they would ask Blaire if she was seeing someone romantically. Blaire had replied that she didn't have a significant other! She now realizes how wrong it was, but she was afraid they wouldn't choose her for the part if she had a special someone. She's SOOOOO sorry!

On the other hand, Blaire is proud that she took that step towards her dream. Misaki says that when trying something new, you either succeed or simply move forward a step.

Blaire pauses for a bit and admits she's never talked to anyone about her failures. Instead, she kept them bottled up inside and felt like she was pathetic. Blaire was always trying to get her time in the spotlight. Now that she's met you, Blaire feels she can be more honest with herself. 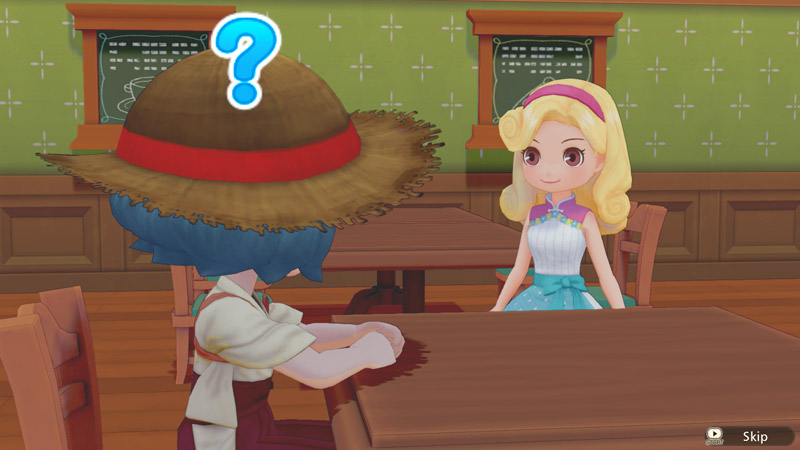 Misaki tells you that Blaire is out on a food delivery. You sit down to talk to her about the movie role Blaire had tried out for. It turns out Blaire was eventually rejected for the part. Misaki asks if you would continue to work on cheering Blaire up.

Misaki leaves the rest up to you.

Blaire returns to the bistro and realizes that you heard about her failed audition. She tells you not to worry about her. The audition was an important lesson on how close she is to her dreams. Dreams are found everywhere! If she looks too far ahead, Blaire might lose sight of what's most important to her.

She asks that you stop looking so gloomy because she's found a new dream. A dream that she can only realize if she stays in town. While she's close enough to reach this dream, Blaire is also afraid that it might slip through her fingers if she tries. 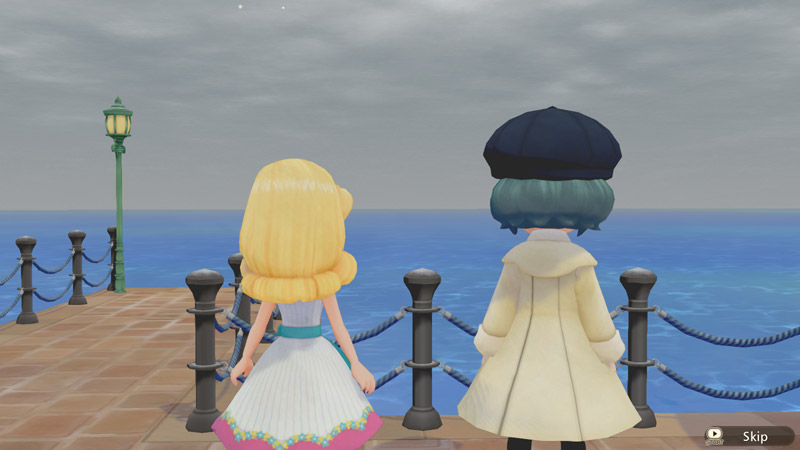 Blaire admits that she's been thinking about living with you. She's been obsessed with living in the city since she was a kid. It seemed like such a cool place. But when you came from the city to live here in Olive Town, she realized that she was meant to stay here. Blaire loves this town and that you've become a part of it. She wants to live here forever with you.

Everyone in town has their own story to tell. In Blaire's case, she plans to be the heroine of the happiest story this town has ever heard!