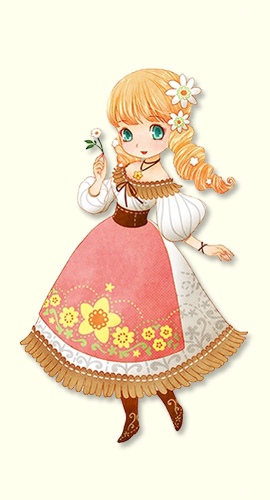 The country-style village of Westown is where Lisette is from. During the day, she managed the local Thousand Bouquets flower shop, making perfumes and floral arrangements. She also sold seeds for the local farmer to grow on their farm. At night, she loves to read books about princesses and knights, hoping some day a wonderous person would swoop in and carry her off her feet. Perhaps she'll find that person by traveling to Twilight Island? 'ya never know!

You can meet Lisette by purchasing the game's optional expansion pass, then take the boat from the dock on your farm to Twilight Island. Lisette originally appeared in Story of Seasons: Trio of Towns as one of the three young marriage candidates from Westown.

Family: (unnamed parents, out of town)

Special Gifts (+1200 FP): Oh gosh, I'm not sure how to react! This is one of my favorite things. Thank you so much for thinking of me!

Liked Gifts (+200 FP): What a delightful present. Thank you!

Everything else (+30 FP): This is for me? Um, thank you for going to all the trouble. 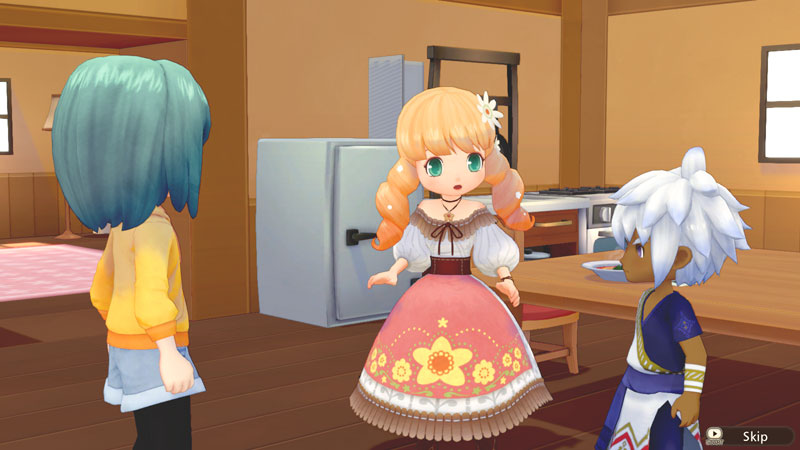 You find Lisette and Tigre cooking together. He's learning Westown recipes from Lisette. Though their towns were close together, they have vastly different cultures. Tigre wants to learn more about Westown food now that they live even closer together, and Lisette says she has the time to teach him.

Tigre asks Lisette why she and Moriya traveled to Twilight Isle in the first place. He explains that Moriya had sent him and Ludus a letter stating that he was looking for a place to rest while his other employees at his store had their own well-deserved vacations. They fixed up a house for Moriya and were surprised to see that Lisette arrived along with the merchant.

Moriya enters mid-conversation and admits he wants to know as well! He didn't want to ask at the time, but even he is curious as to why Lisette would close her flower shop and venture out into the world.

Lisette doesn't want anyone to laugh, but admits that she was inspired after reading a book. The princess protagonist in the book spent most of her life stuck inside of a palace until one day she sets off on a journey. Lisette thought the heroine was so cool! So in essence, one of her fairytale books triggered Lisette to travel to Twilight Isle.

You tell her that she's brave to venture out, no matter what motivated her. Tigre agrees with your assessment. Moriya tells her that if there is anything else she would like to go, let him know and he'll help. 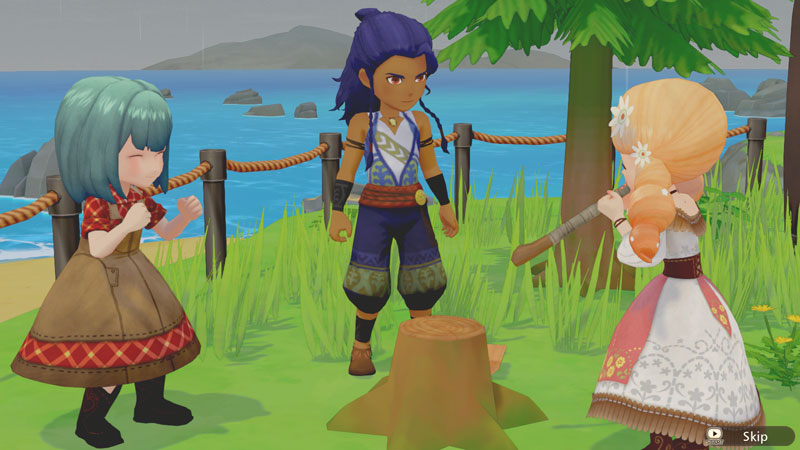 Egad! Lisette is holding an axe at Ludus?! The carpenter is glad to see you've interrupted this strange scene. Lisette explains that she was simply asking Ludus to give her advice on how to be a better woodchopper. She apologizes for startling Ludus. Her parent's wouldn't let her near large sharp objects when she was a kid, so now she doesn't know how to chop wood. As she's used to hauling around large bags of dirt and pots, Lisette feels she's qualified to chop wood, too!

Ludus is impressed with her ambitions, but insists that chopping wood isn't something she needs to worry about. He and Tigre can handle any manual labor. Besides, if she got hurt, that would be the end of her trip. Lisette wants to chop wood because of the heroine in her storybook. The princess had to cut wood to build herself a fire. Ah, that's why! Ludus decides it may be beneficial to teach Lisette how to make lumber, but insists that you stay nearby in case something goes wrong.

The group heads outside, where Ludus gives Lisette pointers on handling an axe. Whew, chopping wood is hard work! Ludus is impressed that she did so well on her first try. What do you think?

Axes are heavier than she imagined. Lisette appreciates the work that Ludus and Tigre do every day. Lisette also thanks you for standing up for her. You believing in her really makes her happy. 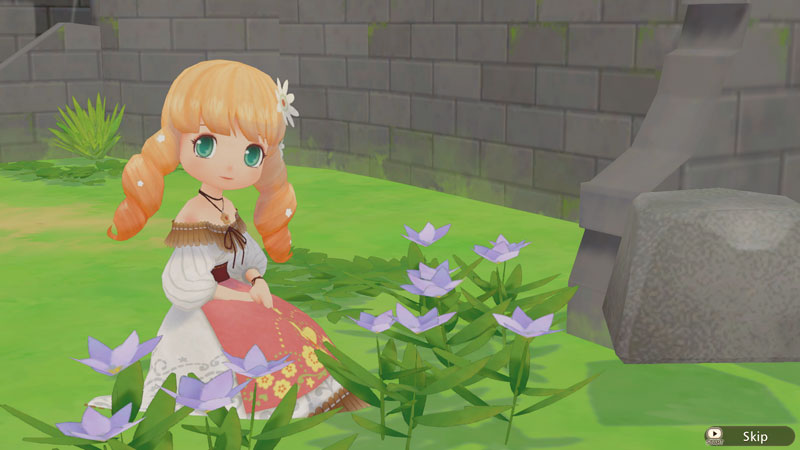 Lisette is looking at some flowers she found in the stone ruins. She tells you that she's documenting all the flora and critters she encounters on Twilight Isle. It's so different than what she's used to in Westown! Even though this island is so far away from her home, she can identify some of the same flowers here.

She then notices a strange, round stone in the ruins with a small pattern carved into it. Moriya is friends with an archeologist back home, and has taken an interest in ancient history because of his friend.

Back at the house, Moriya says he can't make out the tiny writing either, but confirms that the item is actually ceramic and not stone. He's intrigued as to how such high-quality pottery ended up on this small island. Perhaps it originated at the old castle once upon a time. Lisette starts imagining the castle as something out of a fairy tale. Moriya reminds her that this fragment is too small to make much determination about its history. If only there was some way to see the whole pattern...

Moriya feels there are more mysteries surrounding this island and its castle, if it could be called that. Let's try to solve the larger puzzle! It would be amazing if we could identify who used to live in the ruins. Lisette is excited to start treasure hunting. 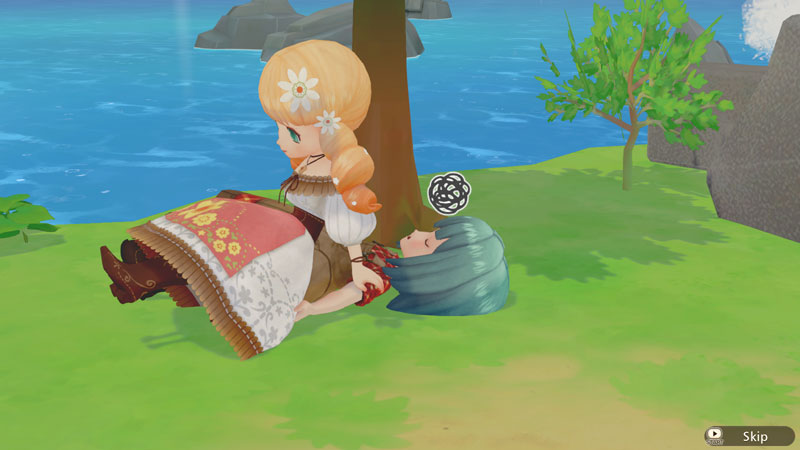 Are you free right now? Lisette takes you outside and explains she found another clue! It was an ornament she found in the pond. Before she could get it to Moriya, a bird flew down and snagged the shiny object out of her hand. Now the object is high up this tree in a bird's nest. Lisette is determined to climb the tree to retrieve the ornament and asks if you would keep an eye on her as she goes up, because she's never climbed a tree before!

You guide her up the tree from the ground, pointing out branches to hold. Lisette finally reaches the nest, grabs the object, but then loses her grip! You run up to the tree to break her fall.

Thankfully no one is injured. Lisette takes a closer look at the item and realizes it's a brooch with a carving on its stone, similar to what was on the piece of pottery.

Bring the jewelry to Moriya, who concludes that the pattern looks kind of like a flower. With her knowledge of flowers, Lisette guesses that the pattern may be a hibiscus. While the pattern doesn't match exactly the hibiscus she has in her shop, Lisette feels that this pattern may be what the flower looked like before it was bred by florists. Moriya plans to send his findings to Mithra the archeologist, making note of Lisette's theory in his letter. 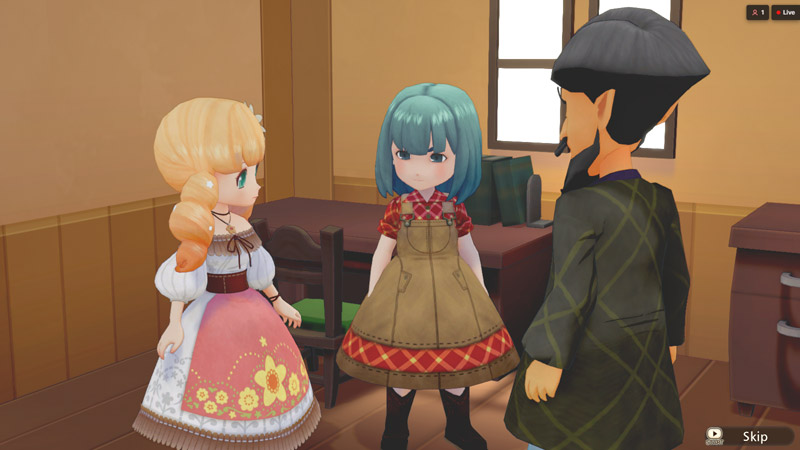 Lisette is excited! They received a reply from Mithra about the brooch with the hibiscus crest carved into it. Moriya was just about to read the letter, and Lisette invites you to find out along with them.

Moriya explains that according to Mithra, there was a princess in a nearby country that took up the sword to protect her citizens. After 20 years of service, her father rewarded the warrior princess with her own small island and a hibiscus flower, known back then to be as valuable as any jewel. The princess used the flower as her symbol and spent the rest of her days peacefully in her island castle. There's no way to know for sure, but the brooch matches the princess' coat of arms, and the ruins may indeed be the princess' castle. Moriya leaves to write a reply to Mithra, leaving you and Lisette giddy about possibly solving the mystery of the stone ruins.

You both head back to the ruins to talk about the warrior princess. Lisette has a fresh outlook about the old place. She reveals that, in some cultures, the hibiscus flower symbolizes bravery. The brave princess may be the source for the association. She would have never learned about the princess had the two of you not investigated the castle ruins. You had inspired her to continue searching after finding that first pottery fragment, and without you, Lisette doesn't believe she would have stuck with this treasure hunt for so long. Honestly, she isn't an adventurous person, and even though she left Westown to be more like her storybook princess, she had no idea how to do so. With you by her side, Lisette is closer to being the heroine of her own story! She has to thank you for everything you've done.

Lisette wants to continue to challenge herself, and asks if you would stay by her side while she does so. You agree, because you're great friends.

After she leaves, Lisette is proud of herself for being so bold. 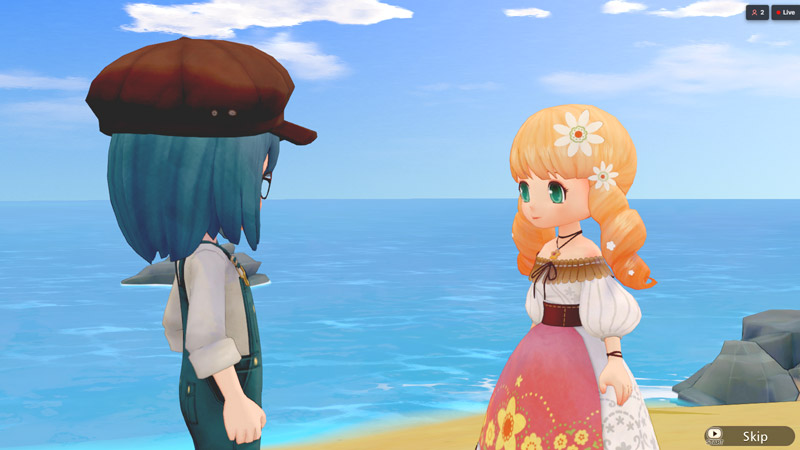 Lisette takes you to the beach where you two can be alone. Lisette is unsure, as she feels your relationship is one-sided; you've been there for her, but she hasn't had the chance to be there for you. You confirm that you do want to take this next step, which makes her happy. She never thought you would feel the same about her as she feels about you! Your encouragement as you nudge her to try new things is endearing. She has looked up to you since you first met, and if you're really sure, she would love to be your girlfriend. Lisette can't wait for the next chapter in your adventure together. 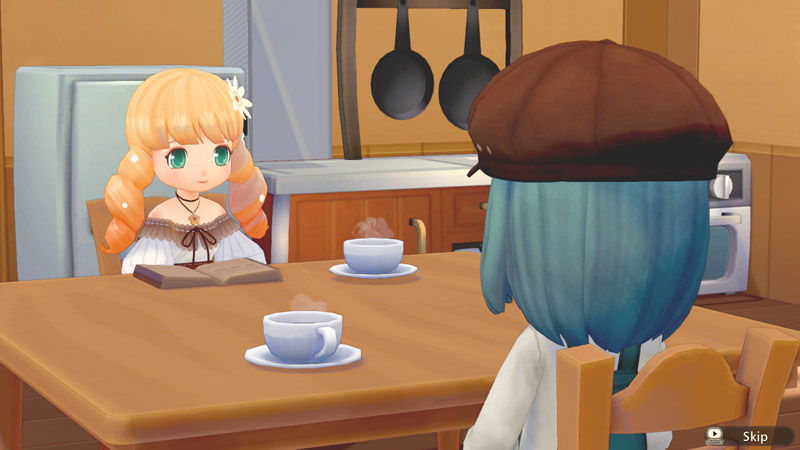 Lisette is so involved with the book she is reading that she doesn't notice you. She is reading the book that inspired her to take the journey out of Westown. The chapter she was reading is near the end, where the heroine sits by a fire with her companions, reminiscing about their adventure. The princess in her story grew up so much during her journey. Lisette's favorite part is when the heroine learns something new with each new companion that joins her party. The fireside ending really expresses how far she's come.

She becomes quiet as she explains that her parents were overprotective. Lisette wasn't allowed to play outside and never had the opportunity to sit around a fire with a good group of friends. Have you ever had a campfire with friends?

Tigre told her that the villagers in Lulukoko would build a bonfire on clear nights. Maybe Ludus and Tigre would help build a fire with us? Lisette gets an idea; those two have helped her so much, she would like to surprise them with something nice. Whatever it is, Lisette insists on giving it a try. She also thanks you for watching over her. 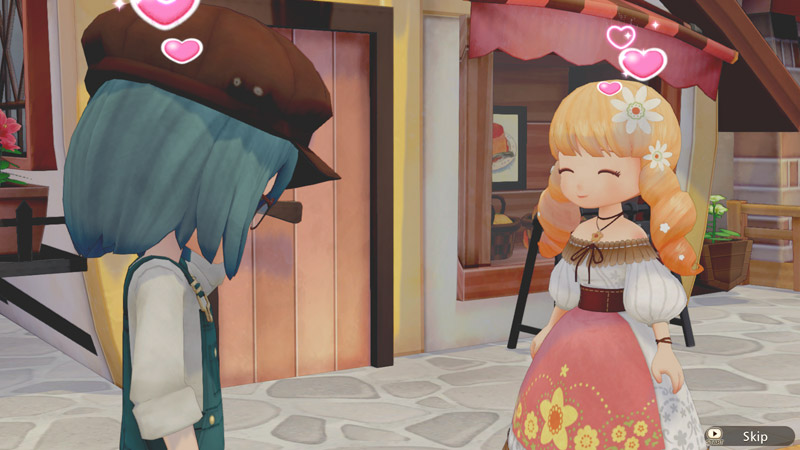 Lisette is busy putting together what she needs for her bonfire party, but she is missing some things. You volunteer to take her to Olive Town to pick up the rest of the materials.

At the grocery store, Lisette is amazed at all the items available to buy. There's so much! In fact, she can't decide which she should buy. Oh heck, let's just buy it all!

Lisette thanks you for taking her to the store. She intended to only buy what she needed, but there were so many options that she had to get a little of everything. There isn't anything else here that she needs. Lisette is going to start the fire with the wood she chopped along with her own skills, so she doesn't need matches.

The two of you head back to Twilight Isle. Lisette hopes you are looking forward to the campfire night.