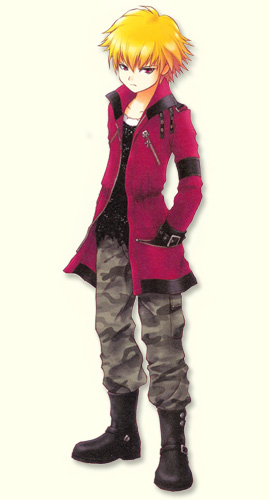 Neil lives in Windswept Falls, an area only accessible by boat if you purchase the optional Windswept Falls expansion pass. He has a cold and uncaring appearance but he's not a bad guy. Neil spends most of his free time with animals and simply doesn't know how to interact with non-animals such as yourself. In Windswept Falls, he tends to his flock of chickens and the other wild critters in the area.

Neil was marriage candidate in Harvest Moon: A New Beginning back in 2012. He is a livestock dealer who sets up shop in the plaza to sell farm animals such as cows, chickens, and sheep.

More information will become available after the expansion pass releases on May 27.

Family: Father (out of town)

Schedule: Neil likes to spend his good-weather days outside and not in a stuffy 'ol house.

Neil meets up with Dunhill on Fridays.

He stays inside his house on stormy weather days. 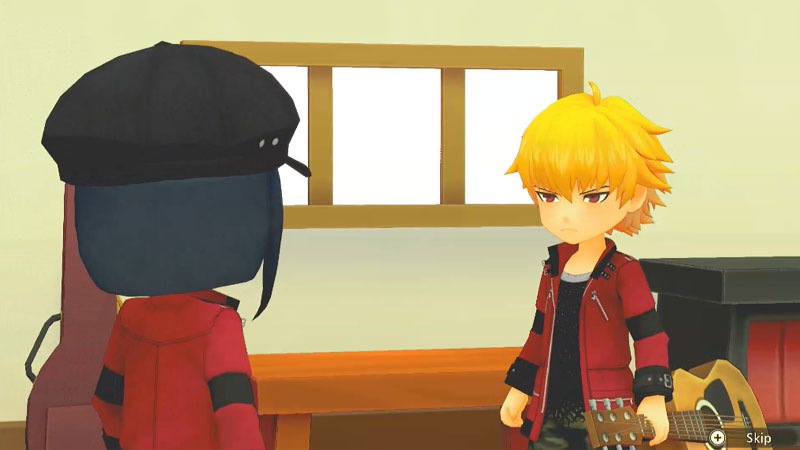 You walk into Neil's house and hear a lovely melody. Neil is playing his guitar, unaware that you are listening. He doesn't seem to be pleased with his tune. You clap in response to his music, and he finally notices you are there. Neil demands that you leave his room.

Playing guitar is simply one of his hobbies. His true calling is managing the animal shop back home. It's closed at the moment while Neil is traveling. He again asks that you take a hike, as he can't focus when someone is breathing down his neck. 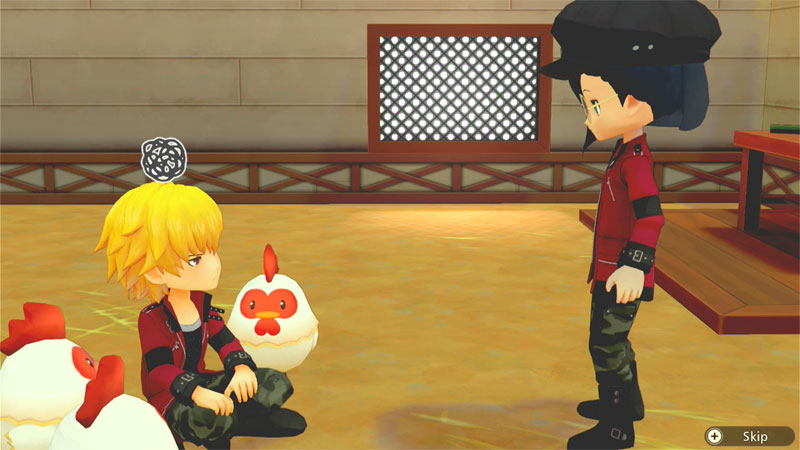 You hear someone talking about how they love someone. Let's check it out! You follow the voice to the chicken pen, where Neil is happily talking with his lady birds.

Neil finally buckles and explains why he closed his beloved animal shop back home. Turns out the reason is Dunhill. The old guy wanted to go out on an adventure and was constantly nagging Neil to come along with him. Neil wasn't interested in leaving his animals, but he knew that if Dunhill went off on his own, Neil would always be worrying that the old guy would collapse somewhere. So he closed up shop and tagged along. Neil finds Dunhill to be a handful, though this "adventure" has been a nice change of pace.

Neil grumbles about revealing too much and demands that you leave him alone. After you leave, he asks his lady birds why you are so interested in chatting with him. 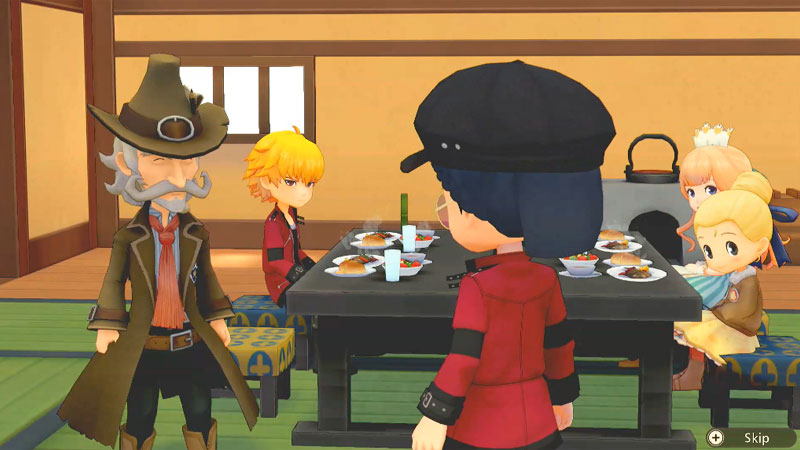 It appears that you've interrupted a meal in progress. Not to worry though; Dunhill would love it if you joined them!

After eating, Felica explains that Dunhill's courtesy is how he convinced them all to go traveling with him. You ask about Neil being forced to go along too. Dunhill is surprised that Neil even talked to you, as typically he tells people to shut up and go away. Neil's cold attitude would scare his customers away. It's a miracle that Neil would open up and make a friend!

Speaking of changes, Felicia lets the group know that Tina finally got her big break writing newspaper articles. Hina tells you about Allen and how he appeared on TV a while ago for being such a handsome beautician, and Dunhill tells everyone that Rod finally earned his animal-training license. He's glad to see everyone is living their dream!

Neil is glad to hear about Rod's success. Knowing his friend, Rod has probably already started on a new goal. Dunhill admits that it's about time he started to learn some new tricks too, before the younger folks leave him behind. Knowledge and experience are life's most valuable treasures. There's no harm in trying something new. Neil warns you to keep your guard up, else you may end up in one of Dunhill's schemes. 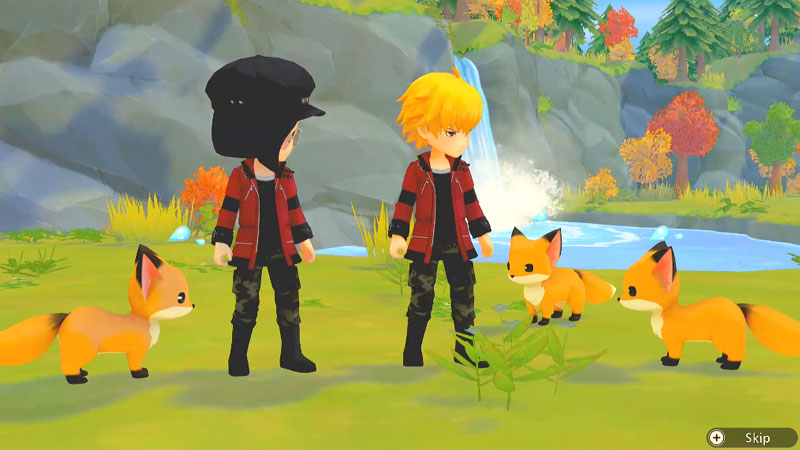 As you walk down the path you see some foxes run past you. There's a whole lot of them, and they look mad! You try to stop the rumble but are pushed backwards. This is more than you can handle! You run back to Neil's house to let him know of the foxy shenanigans.

Neil wonders what might have agitated the foxes, and the two of you run back to the brawl. It's worse than he thought! He instructs you on which foxes to care for while he takes care of the others.

The two of you manage to stop the fox fight. Neil even compliments you on a job well done.

Neil's actions remind you of a skilled doctor. Maybe he could be a veterinarian! Neil scoffs at another one of your suggestions. Becoming a vet is a lot harder than it looks. Enough chit-chat; you guys still need to figure out what the fox fight was about in the first place. Neil doesn't want the foxes fighting again and potentially getting seriously hurt.

The foxes point out an apple hidden in the grass. So that's what they were fighting over! You soon hear Dunhill's voice. The old fellow was out searching for an apple that he lost. Neil becomes annoyed that Dunhill is causing more trouble for him. 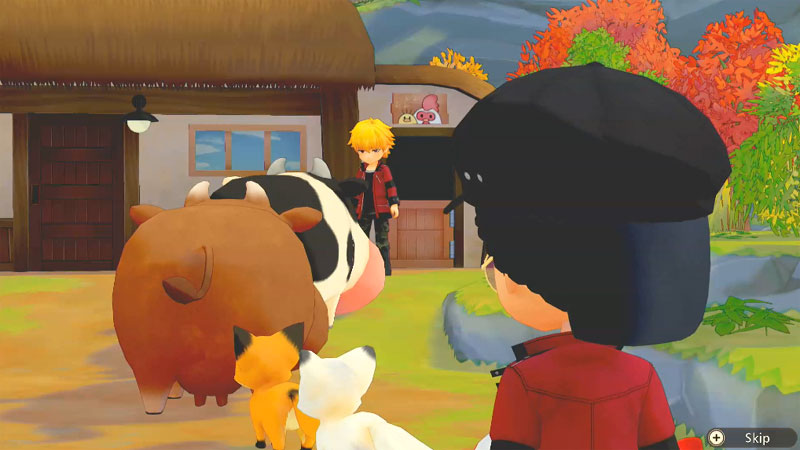 Gadzooks! There is a line of animals at Neil's house! Neil explains that since the day the two of you helped the wounded foxes, there's been a steady line of animal bumps and bruises arriving at his doorstep. There are so many injured and sick animals that he fears he won't be able to get to them all. He's tried turning them away but to no avail; he can't resist their big puppy-dog eyes.

Maybe Neil could use some help with caring for all the animals? Neil agrees that you'll have to work together to get through them all.

You two managed to help all the animals waiting outside of Neil's house. It was rough, but you had a good time working with Neil. Caring for sick and injured animals isn't all that bad! Neil even manages to thank you for helping him. 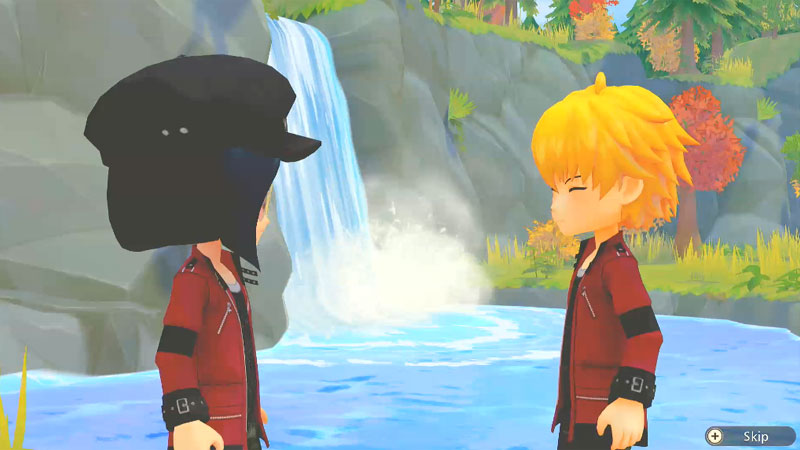 Hold up a second, are you sure about this?! Neil thinks you're strange and doesn't remember what he might have done to cause you to fall in love with him. Anyhow, he is totally cool with dating you. Neil lets you know that he doesn't know a thing about dating. Don't blame him if he can't life up to your romantic expectations, all right? 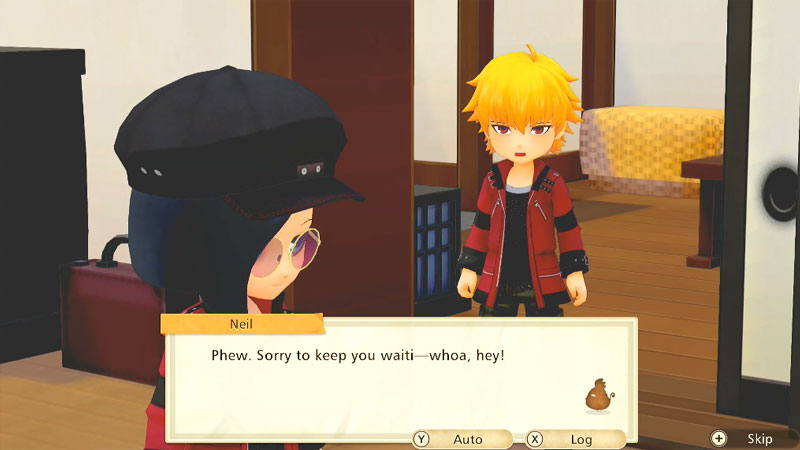 You catch Neil right as he was leaving. He explains that he has to go pick something up, but feel free to hang out here until he comes back.

While he's gone, might as well look to see what's going on in his bedroom! You find several textbooks about animal care. As you look through his belongings, Neil returns and discovers you snooping around. He's annoyed that you were messing with his belongings, but since it is you, he doesn't actually mind all that much. Neil confesses that he's been researching animal-related jobs. In fact, he headed out earlier to pick up more books that he ordered.

... that's none of your business! Ah wait, that's not what he meant to say! Neil confesses that he was going to eventually tell you, but he hasn't decided what exactly he wants to do yet. He asks that you be patient with him for a bit longer.

By the way, what did you come here for? Unfortunately, you've since forgotten why you stopped by. Neil chuckles and lovingly calls you ridiculous.

Outside your front door you see a cow, though it doesn't appear to be healthy! You call for Neil to come check out the sick cow. Neil asks you to calm down, as your cow can sense distress, and tells you that he'll figure something out.

Soon the cow is feeling much better. Neil concludes that she must have ate some trash that was on the ground.

Besides, Neil is glad that he was able to help you out. In fact, you're more of a help than you realize. You were there to help when the foxes were fighting in the forest, and you helped with this cow too. Whenever something happens with animals, you don't hesitate to lend him a hand. It's like you have his back, no matter what! Neil is glad that you could rely on him. If anything happens, feel free to reach out to him for help. 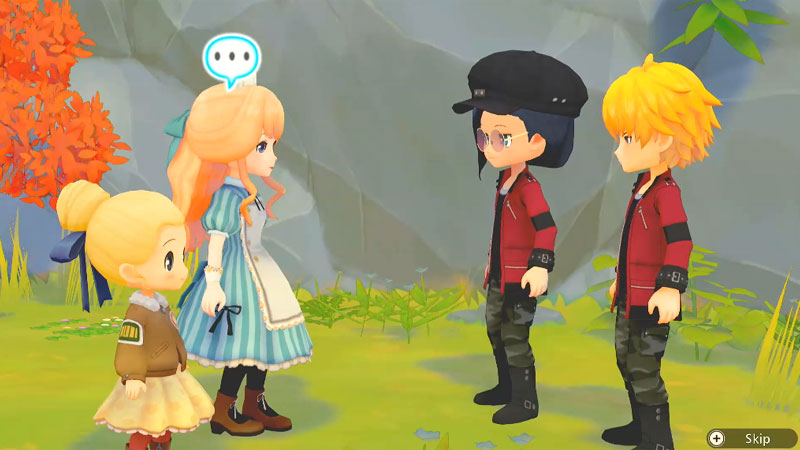 You're just the person Neil was looking for. He tells you, with confidence, that he has decided to become a veterinarian. It's been something on his mind lately. Originally, he thought running his animal shop was good enough. As more people moved to his town, he got to know them and the dreams they were following. Neil started wondering if he was really okay with merely running an animal stall. He started feeling inadequate while everyone else was moving forward with their goals. Neil started doubting himself and couldn't stop thinking about what he truly wanted to do. Going on this adventure with Dunhill was to help him figure it out, but didn't have much success. Now he knows what he wants to do, and he couldn't have done it without you. He knows this might be sudden, but he wanted you to be the first to know.

So, anyhow, would you want to be his... AAH! Hina has spotted the two of you and interrupts this precious moment. She calls for Felicia and tells her that you're going to get ma...

Neil steps in and explains that you were talking about getting a Maine Coon cat. Felicia thinks it's lovely that you're getting an adorable cat. Anyhow, she has some snacks that Hina might link and invites the girl back to her place. As they leave, Felicia hopes that you'll forgive them for intruding on your conversation.