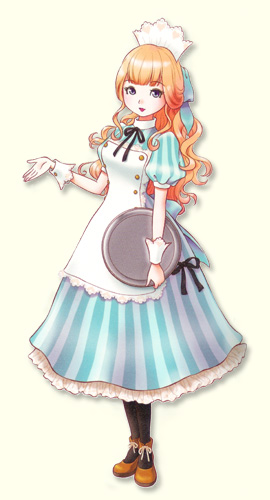 Felicia lives in Windswept Falls, an area that can be reached by using the boat at the dock on your farm. The boat will only appear if you purchased the option Windswept Falls expansion pass, released on April 28, 2021 (Japan) and May 27, 2021 (everywhere else). Felicia is a world-renown food critic and spends a lot of time working on her foodie articles.

Felicia was marriage candidate in Harvest Moon: A New Beginning back in 2012, when she was named "Felicity." In Echo Village, Felicity worked at Clement's restaurant and dreamed of being a popular food critic.

Family: Mother, Father, and older sister (all out of town)

Schedule: Felicia mixes between working on writing her food columns and spending time around the area, but most of the time she says inside her house. Her schedule for most days is:

She takes a break from writing on Fridays.

She stays inside her house on stormy weather days. 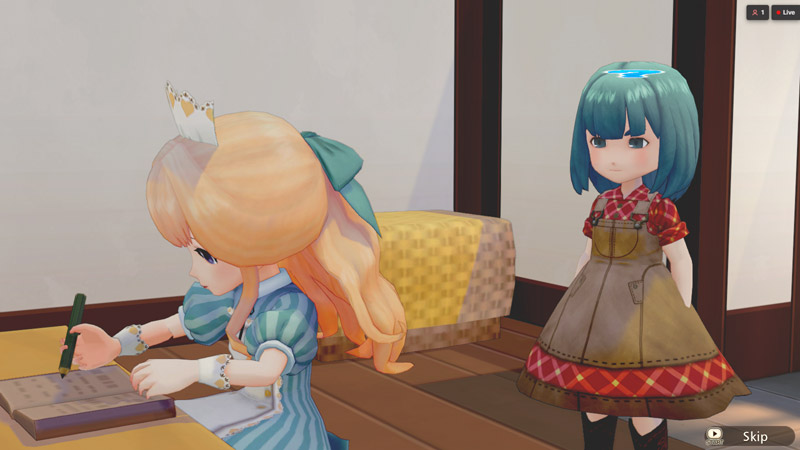 Felicia gets up from her work and startles herself! Oof, she didn't realize you were there! Felicia just finished writing the newest foodie article. She has to write everything to sound as appetizing as possible.

Enjoying a delicious meal can always turn an old day into something special. Felicia loves eating more than anything else! In fact, food is the reason why she agreed to travel along with Dunhill. The possibility of trying new foods was irresistible! What about you? Do you like trying new foods or perhaps cooking new dishes? She would be thrilled to try anything you cook. Someday, she would like to visit the cafe in the neighboring town with her new foodie friend, chatting about tastes and such. 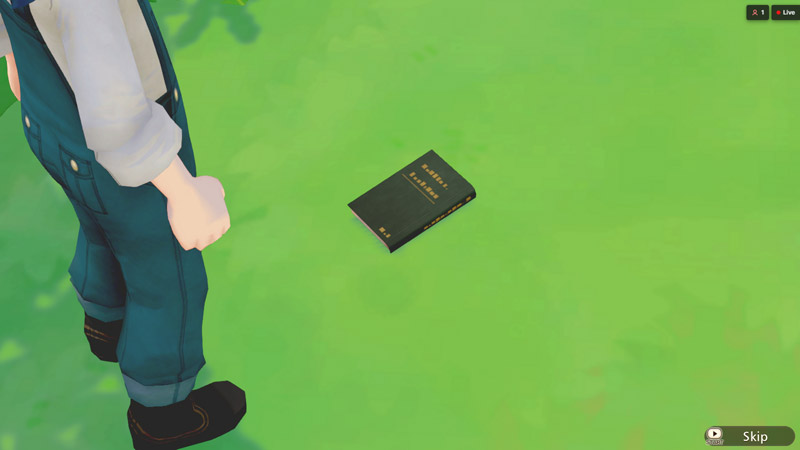 Felicia and Hina are playing games together and ask if you would like to join.

The three of you run through the woods playing. As to take a breather, you notice a notebook titled, "Forbidden Foods," laying on the ground nearby. It doesn't belong to Hina or Felicia, but the food columnist has heard of the book based on its title. Felicia explains that there are rumors of meals that are so delicious that their powerful flavors bring entire countries to ruins! These dishes are so dangerous that their knowledge was hidden away and few know of their existence.

Naturally, Hina wants to eat these meals. Felicia is curious as well, though cautious given the meals' history of certain doooooom. In the end, she decides to give them a try as well. There isn't enough time for this today, but we'll go out and collect the ingredients the next time you meet. Remember, it is a secret! 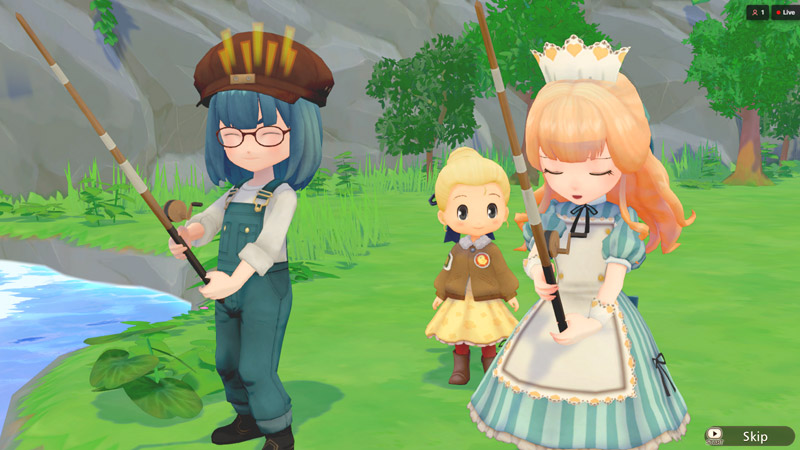 Felicia and Hina are waiting for you by her house. The three of you head to the river to collect the first ingredient, a catfish. After some fishing, you're catching fish, but not a catfish. On the other hand, Felicia hasn't caught a single thing!

Okay, she gives it another try. Finally, she catches a fish! Unfortunately, it is a smelt. At least she caught something!

Some time later you finally reel in the necessary catfish. Now they're one step closer to recreating a forbidden food. The next ingredient is wild berries, which should be easier to collect than a catfish. Hina thinks for a bit, but then complains that she is starting to get hungry. The ingredient hunters call it a day for now. 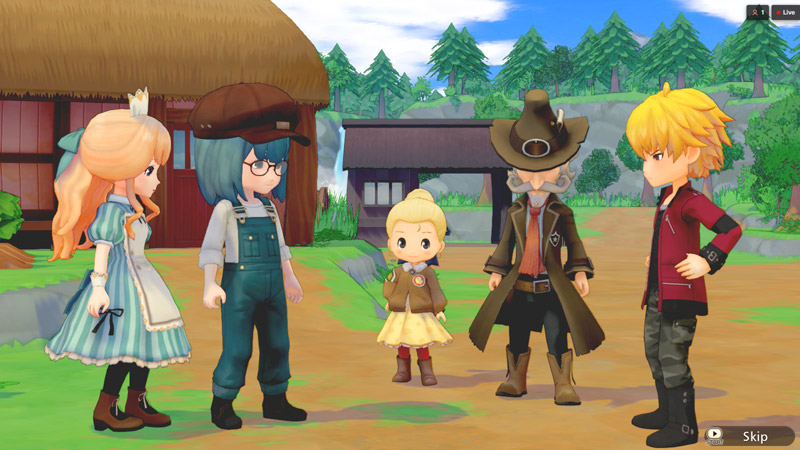 Dunhill, Neil, and Felicia are gathered together. They can't find Hina! Felicia has searched everywhere and cannot locate her.

Felicia wonders if Hina went to look for the wild berries by herself. Neil says there are berries in the area. Hina had been asking him about scavenging for wild plants. Dunhill assumed that Hina wouldn't have wandered off, but Neil isn't so convinced. Hina did sneak into their luggage, after all! Felicia runs off to try and find Hina.

You catch up to Felicia in the forest. She hasn't had any luck finding the girl. You remind her that if she wanders around, she could become lost too.

You're right. Felicia is glad to have your help.

The two of you finally catch up to Hina in the forest. Hina has located the wild berries. She was upset about not being very helpful when catching the catfish, so she went out on her own to search for the next ingredient. Felicia is thankful that Hina is safe, but explains to the girl that everyone was worried when they couldn't find her. Hina admits she did get lost and scared.

Everyone is glad to see that Hina is a-okay. Dunhill reminds her to tell someone where she's going before she wanders off like that again. Dunhill takes her back home.

Felicia is grateful for your help. She felt wonderful when she noticed you came running after her. Anyhow, thanks to Hina, we have all the ingredients needed to cook a forbidden food. 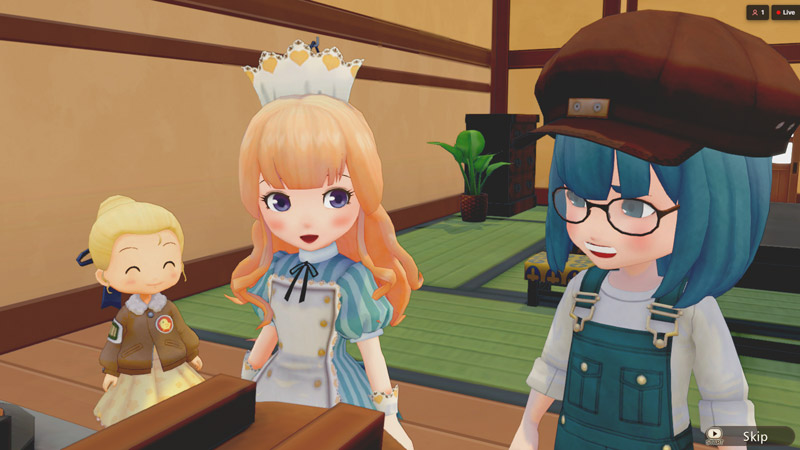 It's time to recreate the forbidden food! Hina is so excited! Now, who should be in charge of this forbidden cookery?

It's agreed that you're the right chef for this particular task. You guide Felicia to help you with the dangerous meal. Observant Hina describes your interactions as though you were newlyweds, causing you both to blush.

The prepared meal looks delicious! As the three of you dig in, something isn't right. Hina describes the food as tasting like smelly old socks. Felicia is beginning to feel unwell. You take the worse of it and appear to have completely passed out!

Dunhill rushes in to see what all the fuss is about. He recognizes the Forbidden Foods notebook on the table. Oh no!

After everyone recovers, Dunhill explains that they're forbidden for a reason! The book was written by a man whose spouse was a terrible cook, containing a collection of recipes he asked her never to make again. They're so terrible, they could knock someone out with a single bite! These dishes are deadly! Dunhill says the book escaped from his luggage the other day. He never expected you three to get a hold of it. Hina and Felicia scold Dunhill for losing such a dangerous collection of deathly recipes and demand that he treat them to a dessert extravaganza to cleanse their palates.

After Dunhill and Hina leave, Felicia is glad that you have fully recovered. Let's not try to cook any more forbidden foods! On the other hand, Felicia admits she had a lot of fun hunting for ingredients with you. She would like to have more of these little adventures! But before that, let's go pig out on some desserts. 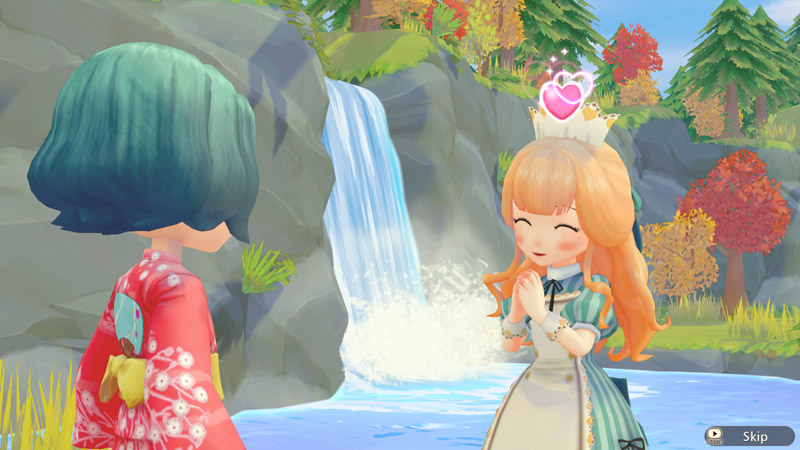 Felicia admits that she has a lot of fun with you. When she's eating a good meal, she finds herself wishing you were there with her. If she was your girlfriend, then she could spend even more time with you! Felicia hopes that you feel the same.

She's glad that you return her feelings. It's such an honor to be your girlfriend! In fact, Felicia asks if she can call you "sweetheart" every once in a while. She can't wait to find out what new adventures the two of you will go on! 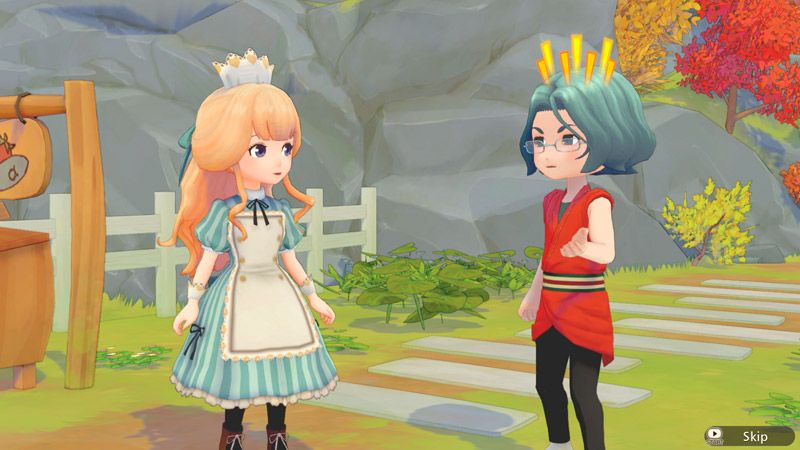 Felicia is glad you've stopped by, but she does feel a little guity; you always make an effort to come see her, but she's never visited your place.

She's been wondering what your farm looks like. You take Felicia to your farm, and she starts to ask questions about the things she sees, then runs off to look at more stuff.

After the tour is over, Felicia tells you she hasn't had this much fun in a while. She learned a lot about you. The farm is as warm and inviting as you are. She loves your farm, but not as much as she loves you! 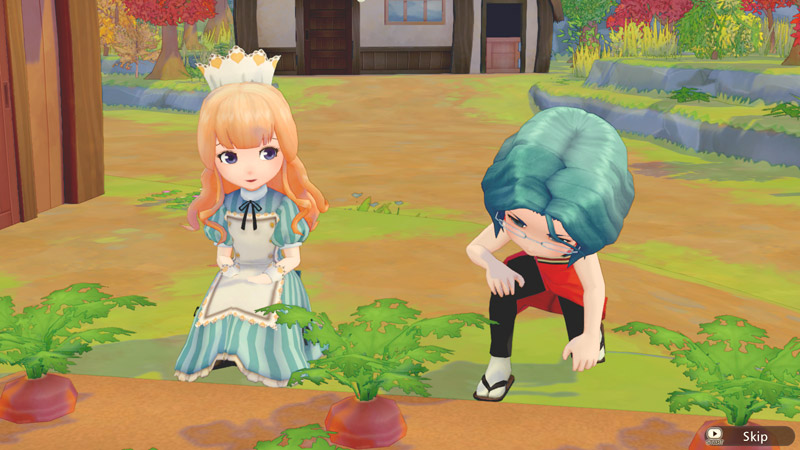 Felicia wants to show off the crops she's growing. She was inspired after touring your farm to learn more about taking care of plants. What better way to do that than experience? Though explaining it like this to you makes it sounds a bit superficial...

Felicia is happy that you're okay with her crop experiment. She does have a lot to learn since her crops don't appear to be doing well. She tried researching the reason why but didn't find any answers.

You take a look at her plants and conclude that they're overwatered. Felicia has a bit better understanding of water requirements and weather now that you've pointed it out. She's impressed you could see the problem just with a quick review of her crops. Felicia figured that this would be a challenge, but now that she's started doing it herself, she realizes that it is a lot harder than it looked. She now understands farmers' work; without them, nobody would have ingredients that make meals so delicious. She thanks you too, of course.

Felicia also better understands the bond between farmer and crops. Before you go, Felicia asks if you'd like some snacks she made to thank you for your help. While she's learned a lot about your interests, she'd also like to teach you some of hers. 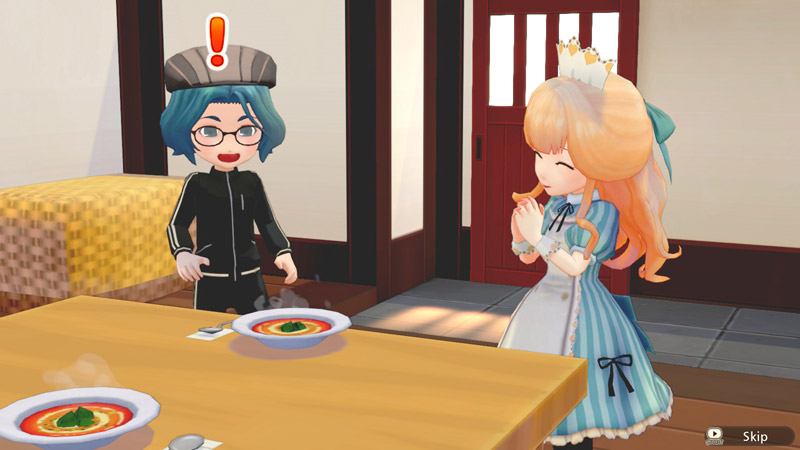 Felicia is very excited to see you! She pulls you inside her house to show you a meal she prepared for you. She was able to harvest her crops today, so she cooked up some tasty soup as a way of thanking you.

After eating, Felicia hopes that the food was to your liking. Even though she isn't a good chef, she really wanted to make you something that brought a smile to your face.

She's glad to hear your kind words. It's you she should be thanking. Without you, Felicia would have never been interested in growing crops or cooking. Even if she had tried, she believes she would have given up at the first failure. But now that she's with you, everything has become more exciting; it's like you are her secret ingredient to success! Felicia has gained the courage to try things, even if she knows she is bad at the tasks. She hopes you will teach her more about farming, cooking, and everything else. 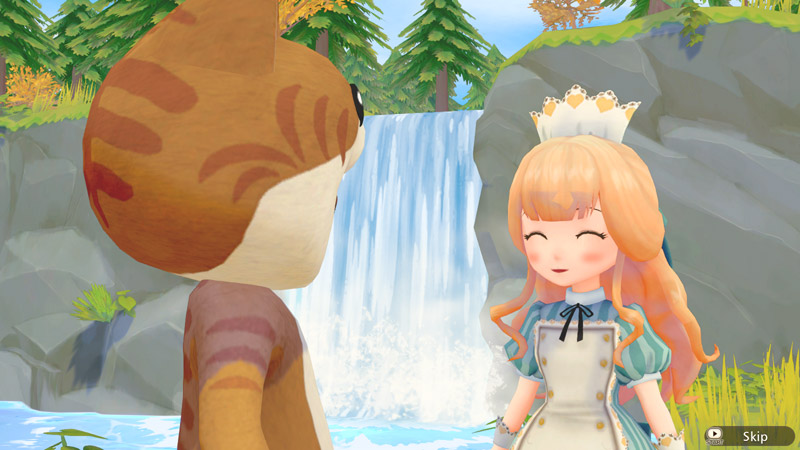 Felicia was hoping this day would come. Time certainly has flown by while she's with you, and it never seems to be enough! If we were married, we could spend as much time together as we wanted. It's all she has been thinking about!

She's been looking forward to this day for so long that she is fully prepared for it. Felicia promises to make you the happiest person in the world and that you'll do the same for her. Now let's tell everyone the good news!

(At this point, you don't talk to anyone else; the event abruptly ends.)