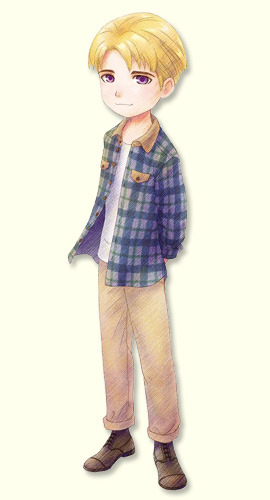 Jack lives with his family at the Olive Town General Store, sometimes helping his mom manage the customers who stop by to pick up crop seeds or construction materials. He is a bit bored with the town and hopes that something exciting will happen some day. In the meantime, he occupies himself with trying to find various trinkets that might sell at the store, as he has an eye for collecting knickknacks.

Schedule: Jack spends most of the week inside the store. In the mornings he heads out to the playground park, but he's back at the store after noon where he remains for the rest of the day, either eating at the table, standing inside the store area, or upstairs in his room.

Jack has a different schedule on Tuesdays when the store is closed. He also varies this schedule depending on how far along you are with helping Mayor Victor make improvements to the town.

If you haven't helped Victor with his 7th request yet (streetlamps and roads combined), he visits the beach area in the afternoon.

If you have helped Victor refinish the streetlamps for a second time and the roads have been converted to bright-orange pavers, Jack spends his Tuesday afternoons trying to shuffle his trinkets at the second market stall that opens up near the tourist boat dock. 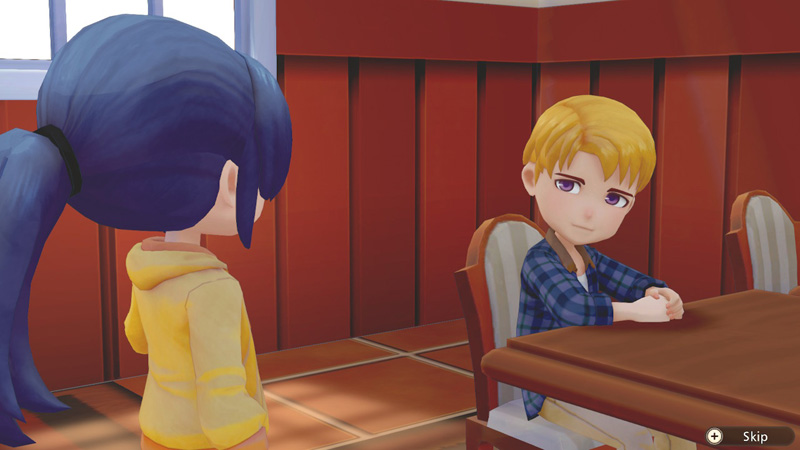 You walk into the store and find that Cindy is the only one there. She doesn't know how to run the store! Cindy asks if you would go fetch her big brother from the Café. He should be there with Emilio.

You find Jack and Emilio at the Café. Jack wonders why you're interrupting their delightful conversation. Emilio remembers that it was Jack's turn to watch the store. Oh yea! Sorry about that!

Back at the store, Jack gets back into shopkeeper mode. Emilio tagged along, so the two of them start goofing around as though Jack is a merchant from a role-playing game, selling weapons and armors to adventurers. 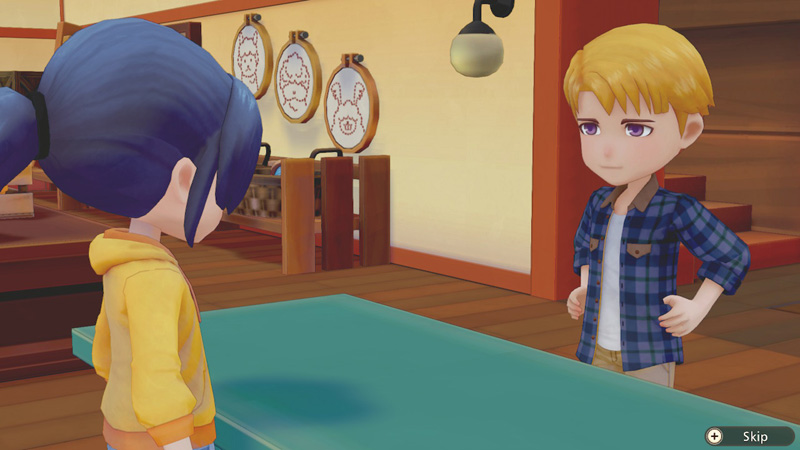 Jack is staffing the shop when you walk in. He wants to try to guess why you're here. Could you give him a hint? Hmm.. something that they'd never have in stock... Oh yea, perhaps a cover for a well. Or a stump? Why would anyone want to buy a stump? Oh, ha ha! Nobody would actually need one! Jack laughs at your jokes.

When Angela returns, Jack tells his mom that he was discussing products with you. Angela has her doubts; it looks like Jack was horsing around again. Jack moves out of the way so Angela can take over. 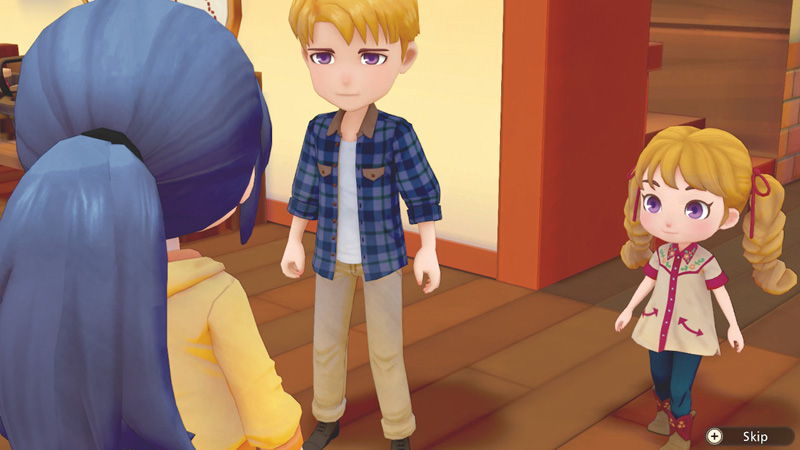 Jack welcomes you, congratulating that you're the 10,000th customer! He gives you a snow globe to celebrate this special occasion. Cindy arrives and asks if they have another 10,000th customer. Apparently, there have been four so far this week. Cindy wants a snow globe of her own, but Jack doesn't give her one, saying they're for the customers. Cindy wants one because she assumes they're for breaking when a relationship ends. They're suppose to be thrown into the ocean while cursing the ex-partner's name, right? That's what happens on TV. If that ever happens, Cindy asks that you give her your snow globe so she can chuck it into the ocean.

Jack tells you that in truth, the store has a ton of these snow globes. He made them a while back, thinking he could sell them as souvenirs, but didn't work out his timing correctly. So now he has to give them away as commemorative gifts. He tells you that this is the first time he's told a customer that. You're really easy to talk to.

After the event, the item "Snow Globe" will appear in your bag. 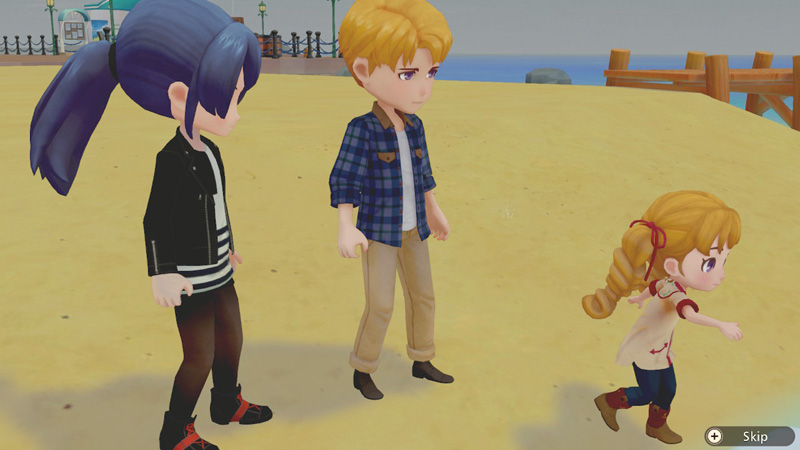 Angela greets you, telling you that Jack is out at the moment. You go off to look for him and find him at the town overlook overlooking the ocean. He says he needs to give you a present for coming all this way to find him and hands you a yo-yo. He tells you that he made a ton of them, thinking he could sell them, but Cindy told him that no one would ever want one. He yelled at her and stormed off in anger, but looking back on it, he knows he needs to apologize.

The two of you head back to the shop, where he apologizes to Cindy. She demands a snow globe - a bunch, in fact - and runs off to the beach, throwing them into the ocean while insulting her brother. She asks you for yours, saying she's going to throw it, too.

You won't lose your snow globe. After the event, the item "Olive Town Yo-Yo" will appear in your bag. 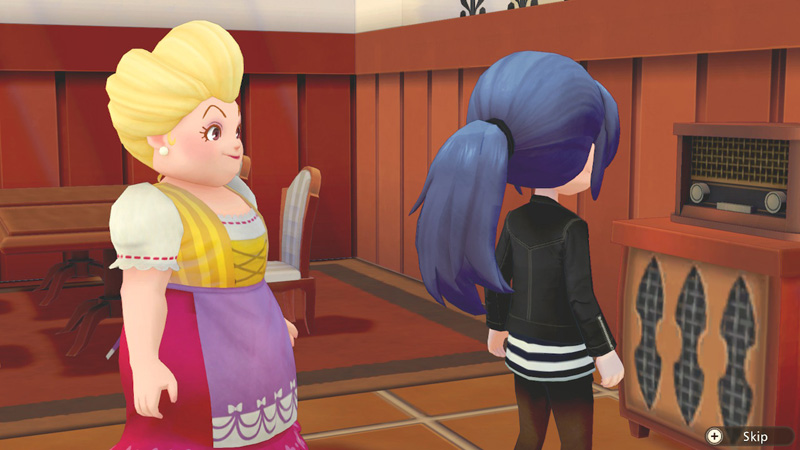 Sally greets you as you enter the café and prepares a table for you to enjoy a nice cup of coffee. You then hear Jack on the radio playing in the background. He's called in a song request. You and Sally listen, surprised. Jack says that this is the first time he's called in a request because today is a special day. He says that a new person (you!) came into town recently and that he thinks about his heart races every time he thinks about them. The radio host tells him he's in love, and Jack says he doesn't want you to go back to the city; he wants you to stay with him forever. He's requesting the song to tell you how he feels.

Sally looks at you in shock! Jack then walks into the café. He mentions how you both look like you've seen a ghost. Sally asks him how he wants his coffee in a stuttering manner. Sally's strange behavior has him wondering if something happened to the two of you. 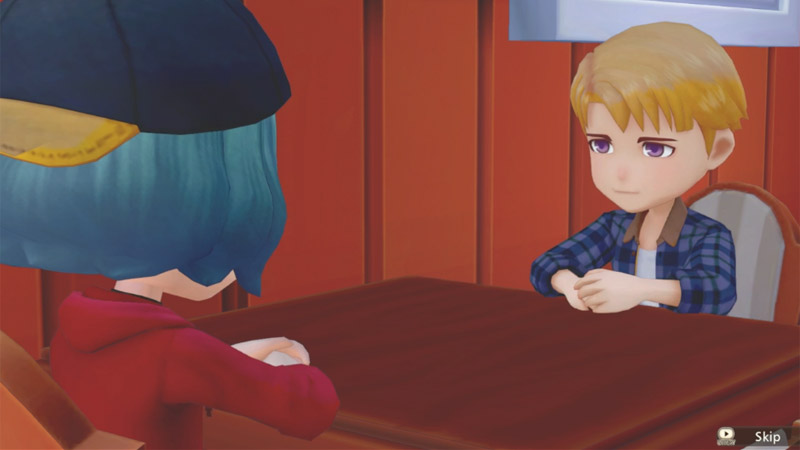 At the Gull's Rest, Jack is skeptical about your confession. Cindy will pop out at any minute and start teasing him, right? He soon realizes that you're very serious about your feelings for him. Jack apologizes for not believing you. It takes a lot of courage to do what you did! Jack admits that he had a difficult time because he too has taken an interest in you. Your enthusiasm and openness are qualities that he admires about you. It didn't take Jack very long to realize that you were all he could think about. Now that you're officially a couple, Jack proclaims that he intends to make a genuine effort in this relationship. He can't slack off anymore! 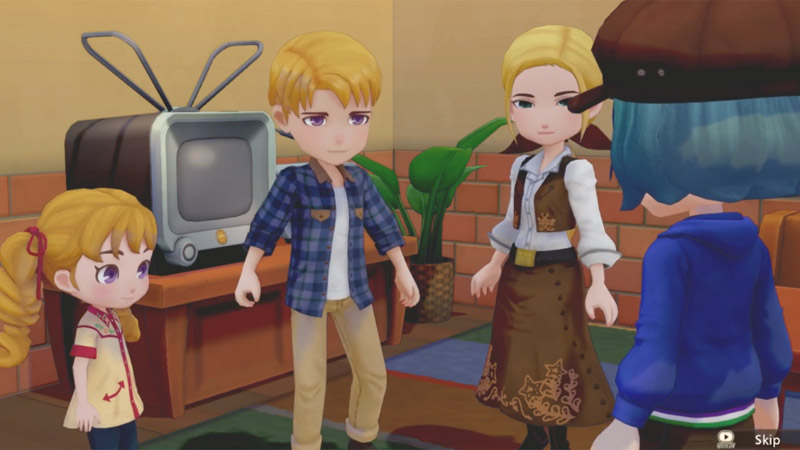 It looks like Angla has volunteered Jack to participate in a business party to help promote the store. Jack thinks the tuxedo his mom wants him to wear is a bit over the top, but she explains that this is a formal party with a dress code. Jack objects to going to this high-society party; why can't Angela attend the party instead? Angela doesn't answer Jack's question and explains that the party was organized by one of their regular customers. She also reminds him to be on his best behavior.

Cindy asks if Jack will be dancing at this party. Jack explains that this is just a networking party, where people stand around eating snacks and chatting. Cindy is disappointed that Jack won't be impressing the others with his fancy dance moves. Jack tells her he doesn't even dance all that much and doubts he would be good at it. Cindy replies that he won't know unless he tries. What do you think?

Cindy suggests that you attend the party with Jack, even to take his picture. Angela puts a stop to Cindy's antics by telling Cindy to go outside and play. Jack reminds Cindy that he's the one who has to go to this party to represent not only their shop, but to represent Olive Town too. It's important work! Angela is glad to hear Jack finally understands how important this party is. 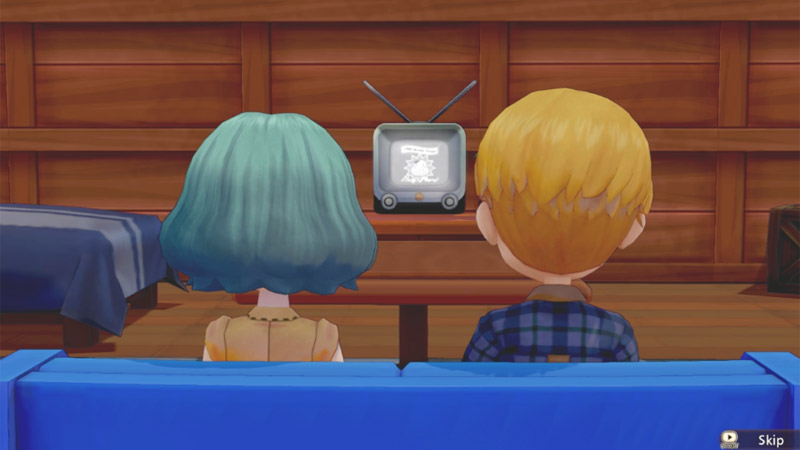 You walk into the shop with the expectation that Jack will be managing the front counter, but you find Cindy instead. She explains that Jack is in the back room watching tv.

Jack tells you that he's watching an excellent movie. Have you seen it before? Jack invites you to watch the movie if you have the time. It is about a court trial where one of the jurists doesn't want to be there, so they're pressuring the other jurists to vote on a guilty verdict so that the lazy jurist can watch baseball instead. Au well drat, the movie cut to a commercial! Jack grumbles about the network inserting an advertisement right before the good part of the movie.

Cindy comes in to check on her brother and nags him about still watching tv. Jack reminds her that he has the right to sit and chill out for a day, but Cindy counter-argues that Jack does that just about every day!

Eventually, the movie puts you to sleep. Jack notices that you've dozed off in the middle of the movie. Instead of waking you up, he leaves you alone so you can rest. Besides, you look cute while you sleep. 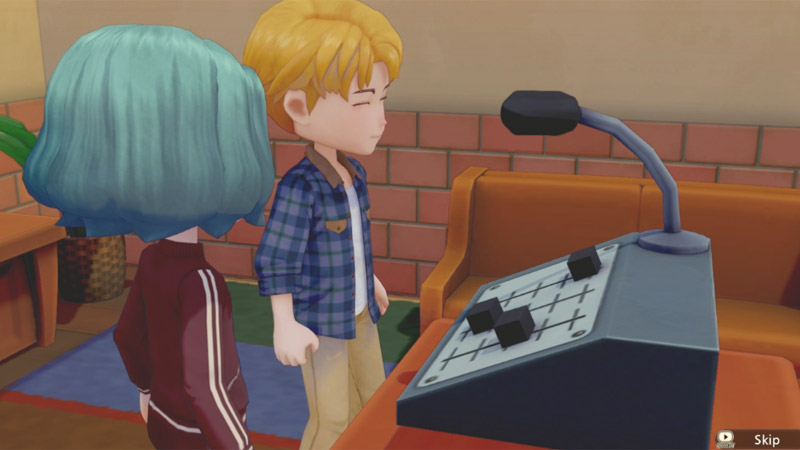 Jack's glad to see you, as he needs your help carrying a big piece of equipment. Starting today, Jack will be airing a 1-hour radio show where he'll play whatever songs he likes and talk about all sorts of stuff! He's told everyone in town to tune in during his showtime. Everyone around town listened in to DJ Jack and your radio show.

At the show's end, Jack invites listeners to send in their song requests. Those who have their song played over the air will receive one of Jack's old yo-yos! So that's how he's going to get rid of those trinkets! 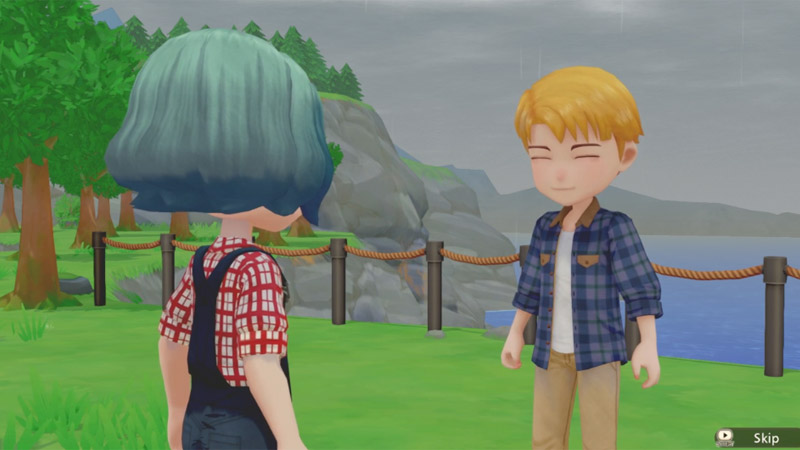 Jack takes you for a walk to the town overlook and admits that he was planning on proposing to you, but you beat him to it! Jack had prepared a speech and asked that you let him give the speech anyway. He promises to make you happy because Jack says he's happy too when you're happy. He struggles with the next part of his speech, but collects his thoughts and tells you that being with you makes him the happiest guy in the world.

Jack is happy and promises to give his everything to be the best spouse you could ask for.