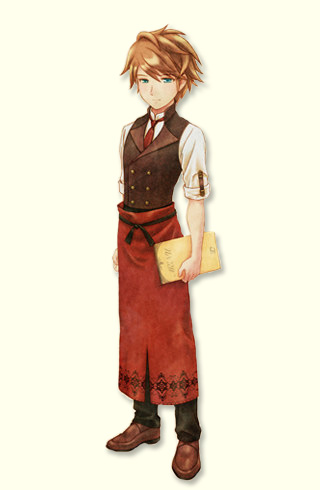 Raeger is a chef at the restaurant he owns back in Oak Tree Town. He took over the restaurant after his grandfather passed away and generally runs it in the same manner, though Raeger likes to put his touch on things by adding new meal creations to the restaurant's menu. Raeger wants to keep an eye out on delectable ingredients to whip up into something delicious.

You can meet Raeger by purchasing the game's optional Expansion Pass, then take the boat from the dock on your farm to Terracotta Oasis. Raeger originally appeared in the first entry of Marvelous' rename for the localized series from Harvest Moon to Story of Seasons back in 2015.

More information will become available after the expansion pass releases on June 24. Because this expansion is being released worldwide on the same day, if you have any information that you have discovered about Iris and you want to share it with other UNOTers, send me an email or contact me using the live Helper Chat. Thanks! 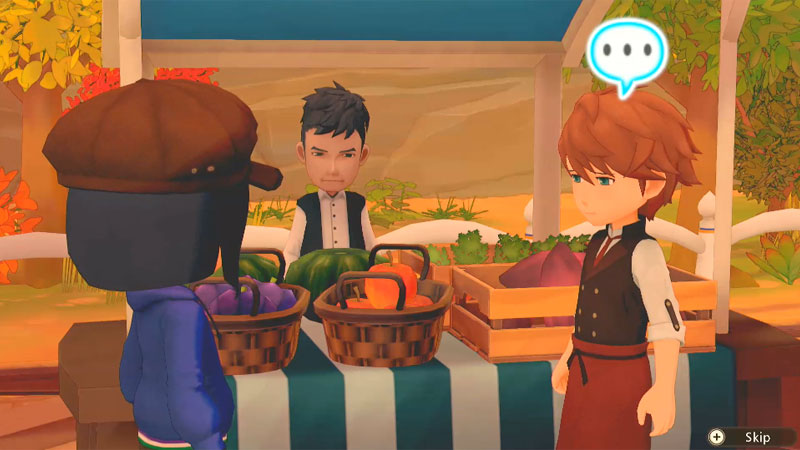 Raeger is chatting with one of the bazaar stall owner about his exotic produce. The shopkeeper confesses to Raeger that he's receive several inquries from women about the chef. He's not even sure if they come to buy from his shop anymore; they're just there to ask about Raeger. The chef is flattered by the attention, but he's not interested in sharing a meal with any of them. The shopkeeper then asks if perhaps Raeger would like to have lunch with him instead; the bromance between them will be unstoppable! Alas, Raeger passes on that offer as well.

You walk up to the stall and greet the two men. Raeger explains he's there to look for new ingredients to spice up his latest recipes. He tells you about his restaurant in Oak Tree Town, but it's being remodeled at the moment. That's why he's here staying at Terracotta Oasis for a while.

Raeger becomes hesistent with carrying on this conversation. He apologizes, but he has something he needs to take care of.

After he leaves, the shopkeeper tells you not to worry about it. You didn't say anything that would offend him; Raeger's always like this when anyone asks him about his private life. He probably has his reasons... 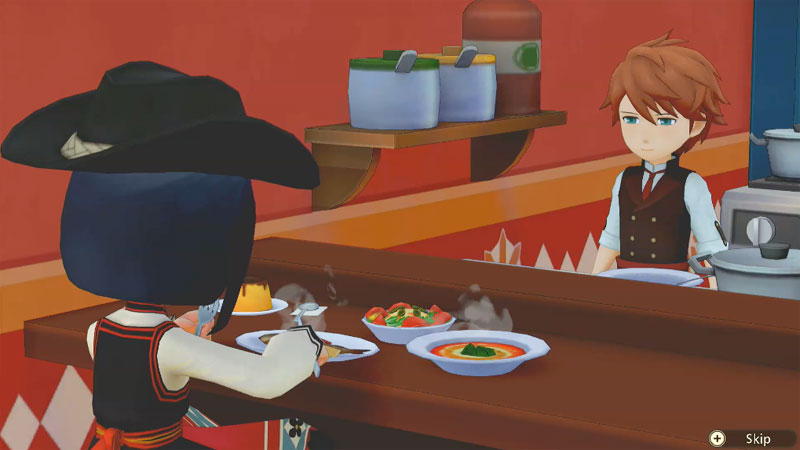 Raeger appears to be busy cooking up a new recipe in his kitchen. He's becoming a bit frustrated and asks if you have any business with him. He thinks for a moment and then asks if you would be willing to taste-test his new dishes for him? Oh boy, food time!

You sit down and start chowing down on his meals.

He continues to watch you enjoy his food creations. It's been a long time since he's had anyone taste his creations.

After the meal is over, you suggested that he try to cook something using the produce from your farm. Raeger asks why you became a farmer, and after hearing your story about your grandfather's farm, he understands that the two of you are similar. Raeger also had a supportive grandfather who inspired him to take up cooking. After he inherited his grandpa's beloved restaurant, he wanted to... well, Raeger pauses and changed the subject back to your crops. He'd be glad to cook something delicious using your veggies. 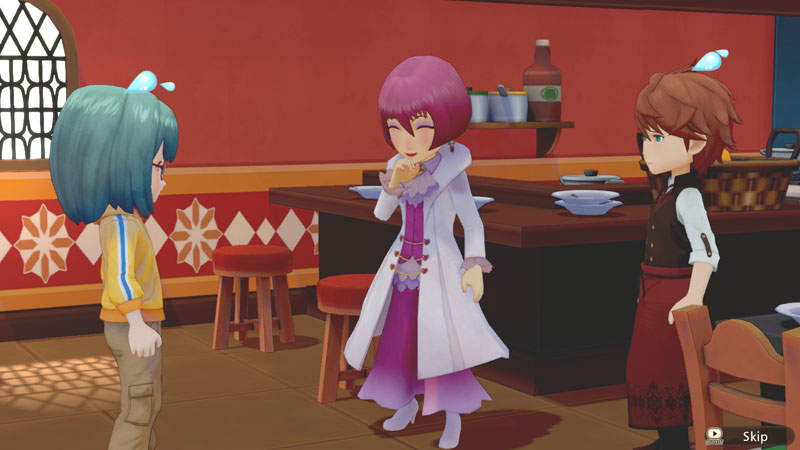 Marian is lecturing Raeger on his work ethic. The doctor is worried that Raeger might collapse from exhaustion. Georgio and Marian didn't invite Raeger to Terracotta Isle to see him burn himself out. At this rate, Raeger should have stayed in Oak Tree Town where more people are there to keep an eye on him. Raeger insists that he does spend some time relaxing; Marian doesn't need to be so concerned. Marian asks what Raeger does outside. Well, he looks for herbs, plans new recipes... See! That's what Marian was trying to get at! Raeger simply must do something other than cook!

They notice you're watching this conversation. Raeger asks if you're here to follow up with the veggie delivery he suggested during your last visit. You explain Raeger's offer to cook a meal using your farm produce. Raeger tells Marian that he has to get started with cooking, which simply frustrates Marian; it's like he's talking to a brick wall!

Marian takes matters into his own hands and asks if you would take Raeger out for a bit. If the chef is left on his own, he's bound to neglect his self-care.

Outside, Raeger apologizes for Marian getting you involved in this matter. You'll need to find him a souvenier to get Marian off Raeger's case. Raeger remembers that Marian once said he likes cute things. The chef jokes that he could give you to Marian but that the doctor may accuse Raeger of not putting in the effort.

The two of you head to the bazaar to look through the booths. There sure are a lot of items! Raeger admits he usually only looks for ingredients or cooking utensils, so the wide variety of other goods has overwhelmed him a bit. He must have been shutting the world out to not notice everything else that was available to buy.

Yes, you're right. The two of you continue your search for a suitable souvenir for Marian.

Satisfied off with your choice, the two of you return to Raeger's house. The doctor asked if the outing helped, which Raeger confirmed. He feels refreshed now! Marian is glad to see that Raeger feels better, though all he did was set Raeger out on a path. The one who should receive the credit for making him smile is you. Marian hopes that you'll take good care of Raeger for them. Raeger thanks you for going out with him today. He wouldn't have had as much fun if you hadn't been there. He'll make that meal you wanted the next time you meet.