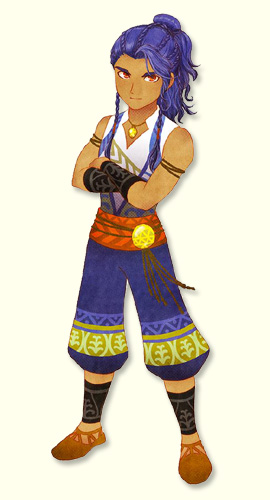 Ludus moves to Twilight Island from the tropical town of Lulukoko, where he was the local handy-guy. No longer smothered by his best buddies, Iluka and Siluka, on the island he can relax his mighty arms and take a break from all his carpentry chores. Ludus headed out from Lulukoko to check out the world outside his tropical fishing village, and brought youngster Tigre along with him.

You can meet Ludus by purchasing the game's optional Expansion Pass, then take the boat from the dock on your farm to Twilight Island. Ludus originally appeared in Story of Seasons: Trio of Towns as one of the three young marriage candidates from Lulukoko.

Family: Tototara (grandma, out of town) 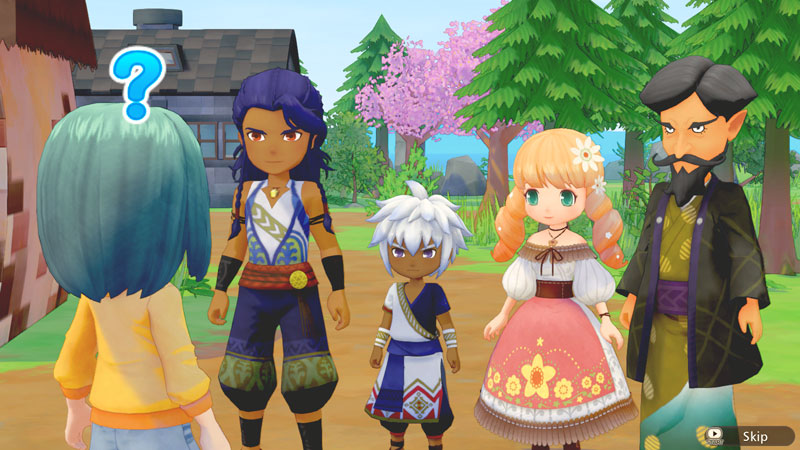 The gang is glad to see you, as they've just been discussing traditional Lulukoko greetings. Earlier in the day, Ludus had greeted Moriya with the traditional "aloha," and now the merchant wants to learn more about the phrase. Moriya explains that whenever he spoke to Lulukoko villagers during festivals, they would use unfamiliar words. Moriya and Lisette both lived in towns in close proximity to Ludus' home town of Lulukoko. Tigre says he wasn't from Lulukoko, so it took him a while to get used to the customs of the town.

Ludus teaches you that "aloha" has a similar meaning as "hello," while "e kala mai" is like "excuse me" or "I'm sorry." He teaches you a few more terms from Lulukoko. He expects you may not have heard those terms before, as Lulukoko is far away. He traveled to this area to see more of the world. Tigre tagged along and helped Ludus fix the run-down houses they found here on Twilight Island. When Moriya (somehow) sent them a letter explaining he intended to visit, they fixed him a house too!

Yea, Ludus is an amazing craftsman! Tigre explains that Ludus is also good at sewing and cooking, and even built the boat they used to travel to Twilight Isle. Lisette and Moriya also start sharing rumors that they've heard about the blue-haired handsome fellow.

While the three friends gossip, Ludus asks about your life. On learning that you live on the farm by yourself, he wonders if taking care of everything on your own may be overwhelming. But you're okay, as the folks in Olive Town look out for you. 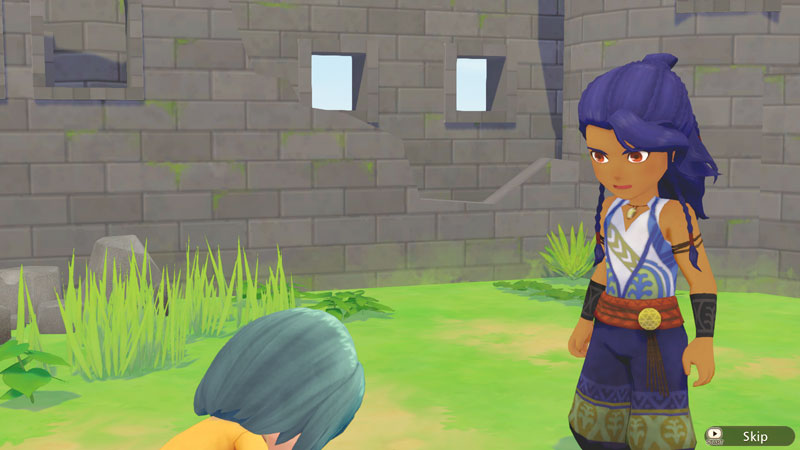 Ludus is looking around the stone ruins. Moriya's house needs repair, so Ludus is searching the area for some good-quality stone. As far as he can tell, the houses on Twilight Isle were built using the stone from the old castle. After the castle fell into disrepair, someone repurposed the scattered stones to build the small dwellings.

He wonders if the two houses were once pirate hideouts. They were in bad shape when he arrived and contained broken high-quality furniture. The pirates have been gone for a long time; he and Tigre searched the island for treasure, but came up empty handed. With no sign of recent activity, Ludus assumed it was safe to repair the houses.

Ludus is still amazed at the quality of the stone at the ruins and wonders who would have built such a magnificent castle only to abandon it. Anyhow, he needs to get back to work. You offer to help him and prove how strong you are by lifting a stone. Well okay, you can help him after all! 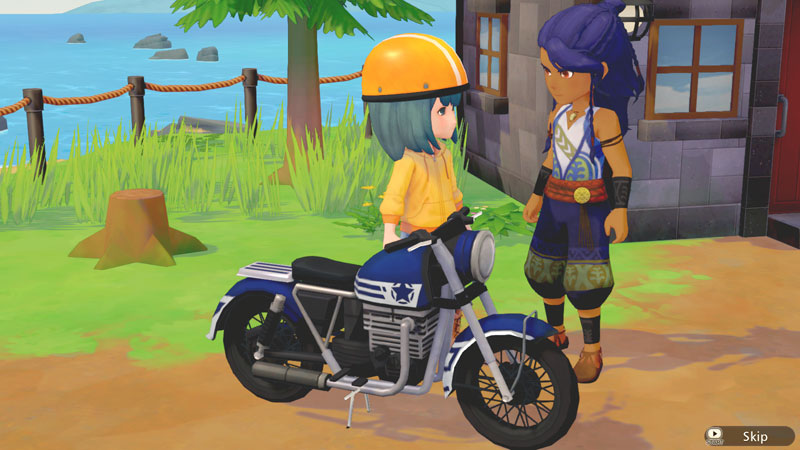 You find Ludus kneeling next to a boat. He explains he is working on the Top Banana; his sea-crossing closest friend.

Besides, it isn't the name itself that matters. Giving the boat a name makes it feel special.

You explain that in Olive Town, the folks get around by motorcycle. Ludus would like to see that! You then head back to town, talk Clemens into allowing you to borrow a motorcycle, and somehow get it back to Twilight Island to show to Ludus. Ludus finds the motorcycle fascinating and asks that you show him how its runs.

When you return, Ludus starts pondering about internal combustion engines. Even the boat you take to the island has an engine. Ludus stops before he absorbs himself in engine thoughts. He would love to see more city technology! You invite him to visit Olive Town with you someday. 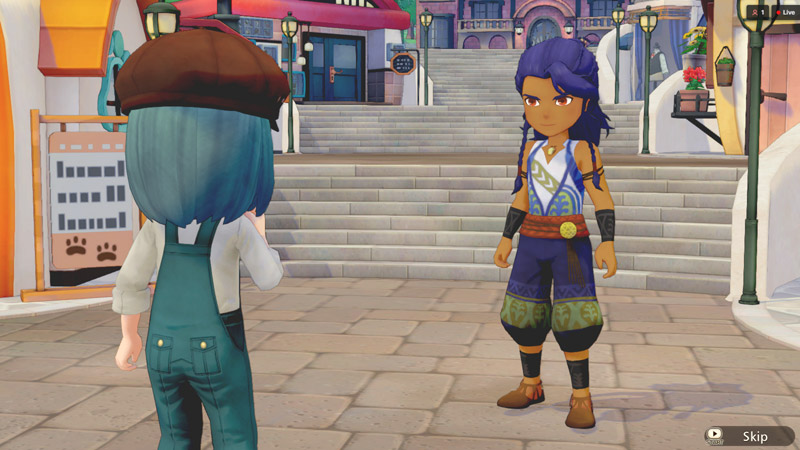 Ludus has some free time and is interested in taking you up on that offer to tour Olive Town. You show him around town, eventually stopping by the Olive Museum. Ludus is impressed with the stone artifact. He doesn't understand a lot about art, but looking at the objects here is something profound. These types of experiences remind him why he started his journey. It's fun to learn new things.

As you two leave, Ludus thanks you for the tour. Besides. visiting the museum with you was more fun than had he gone by himself.

Back at the island, Ludus thanks you again. Ludus gets an idea and asks if you would stop by and cook a meal at his place. He would like to experience more of the local culture and how food is prepared differently here. Ludus will collect all the ingredients you need. 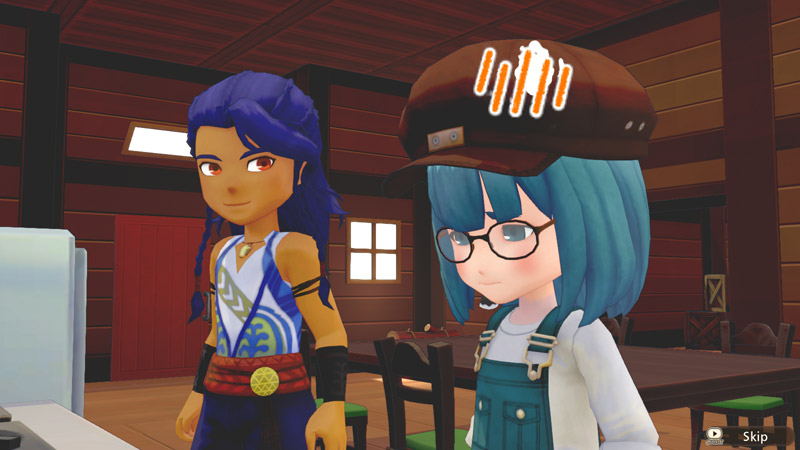 Ludus assumes you've stopped by to give them an Olive Town cooking demonstration. Ludus fetches Tigre, who is interested enough that he plans on taking notes. Ludus volunteers to help with the cooking. As the meals are prepared, each one gets tasted to ensure they're delicious. Ludus notices that you have a bit of broth on the corner of your mouth. Oh no! Ludus realizes that he's embarrassed you and starts setting the table.

The meal was delicious! The Olive Town food reminds Tigre of the food in Westown. Even though Lulukoko's food tends to be on the spicier side, that doesn't mean it is better. Each town has their own approach to seasoning.

Ludus reminds him that Tigre's cooking style is a different genre than yours. Tigre still intends to apply some of the tricks he learned by watching you cook.

As you leave, Ludus thanks you again for the meal. Olive Town might be a gourmet paradise, or maybe the meal was delicious because you were the one who cooked it.