The farm created for you by Doc Jr will come with a small animal barn. The single-room barn is divided into two spaces. The livestock half that can hold 3 animals, and the poultry half that can hold up to 5 chickens. Farm animals will produce goods to sell almost every day.

There are two shops where you can purchase farm animals: The Animal Dealer in Calisson and Jamil's mom, Rania, in Pastilla.

When you buy an animal, the shopkeeper will ask you to select a space in the barn for it to reside, then give the new animal a 14-character name. The animals purchased from the shops are babies and must mature before you can harvest goods from them. It seems there is a bit of randomness regarding how long until they grow up. One of my sheep took 17 days to mature, and another took 18 days. Generally, a livestock animal will take no more than 20 days, and a bird will take no more than 14 days.

To start buying animals for your farm, the Animal Dealer in Calisson will visit you in the morning and ask for help. She'll assign you the Protecting Animals 1 task. Bring her 4 Potatoes to unlock cows, sheep, and chickens in the animal shops. The remaining animals can be unlocked by continuing the Protecting Animals tasks with Jamil after you solve the Pastilla storyline.

Doc Jr can expand the barn to hold more animals. Complete his Great Ancestor's Challenge requests to unlock the option to upgrade to a Large Animal Barn (5 Silver, 10 Oak Lumber, and 50,000 G) and then upgrade to a Huge Animal Barn (5 Adamantite, 4 Maple Lumber, and 250,000 G). The barn upgrades will add another room to the existing interior barn rather than make more stalls and feed bins in the existing single-room barn space. The Large upgrade adds a room to the west end of the barn, and the Huge upgrade adds a room to the east end. Each room is a separate barn with its own grazing bell and feed troughs.

After the Huge barn upgrade, you can have a maximum of 9 livestock animals and 15 chickens.

There is no way to sell unwanted animals. To free up space in your barn, you either have to let the animal die or you release it back into the wild. Visit the Making Friends section of the DocPad and open the list of farm animals. From there, choose the animal you don't want anymore and select the "Let Go" button on their profile page.

There are ridable animals in the game, but they take up precious livestock stall space in the barn and are only used for two festivals: the Equestrian Challenge in Calisson and the Reindeer Rush in Salmiakki. While you can use any ridable animal during the Equestrian Challenge, only a Reindeer qualifies for the Reindeer Rush. You can buy 1 Reindeer and use it for both festivals, freeing up limited barn space for other livestock animals. 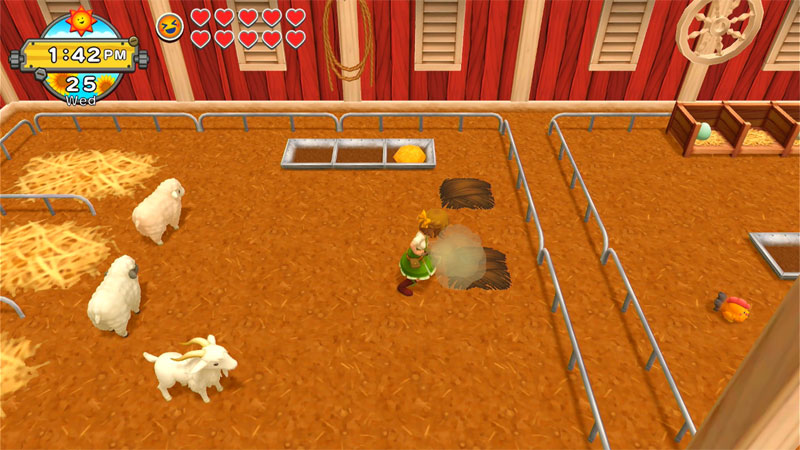 Brandon gave you all the tools you need for animal care. Walk up to an animal and interact with it. With livestock, you'll first have to brush them, then pat them on the head, and then you can harvest their products. Chickens don't need interaction to entice them to lay eggs; you can just walk over and pick the eggs up out of the boxes.

As noted, most animals will produce goods every day. The exceptions are with Araucana Chickens and Silkie Chickens. These birds will only lay an egg every couple of days until their friendship notes are high. Friendship notes naturally increase as you interact with your barn animals.

You'll find Compost scattered around the ground every day. Interact with the Compost to pick it up into your inventory. This item can be used in the Fertilizer Machine next to the barn to create bags of handy fertilizer for your crops. Leaving the Compost on the ground will negatively affect your animals' stress levels. No animal likes walking around in their own poo poo.

Each room inside the barn has an animal bell. Ringing that bell will send only the animals from that room outside. Activating the ringing bell from another barn room will send those animals outside, and the ones already outside will return to their barn room. The game cannot herd every animal outside when you've more than 3 livestock and 5 chickens.

Animals must feed every day to produce goods. Their food is sold at the General Stores in various towns. The cheapest Level 1 Animal Feed costs 100 G per bag. The windmill on your farm can also process 2 Grass into 10 bags of Level 1 Animal Feed.

To feed an animal, walk up to the feed bins and select the animal food to use. Animals will take 1 hour to fill their tummies. You can fill the feed bins the night before to have the animals start eating as soon as you wake up in the morning.

Gentle Feed helps to reduce an animal's stress level, while Fast Animal Product Feed doesn't appear to do diddly-squat. Even when feeding animals nothing but Fast Animal Produce Feed, I've only ever collected 1 item per animal per day. I even tried feeding a pregnant cow bags of Fast Animal Product Feed, and nothing changed production-wise with either the mom or the baby after it grew up. Perhaps someone else will have better luck with it, but for the cost (2000 G to 6000 G per bag) or for the effort to collect the ingredients to make it yourself, it doesn't appear to be beneficial.

Animals can be sent outside to graze, and they will eat outside IF there is mature grass to eat that's growing in your field. Grass Seed Wisps are commonly found in Calisson and Lebkuchen. Not every animal will always graze outdoors, even when plenty of grass is available. Animal Feed will need to be added to the barn feed bins to give food to those animals that refused to graze outside. Because grass doesn't regrow after being consumed (or harvested), you'll have to plant more seeds once the grass disappears.

Chicks can be hatched from eggs set in the nesting box on the poultry side of the barn. Interact with the nesting box, select an egg from your inventory, and then wait 10 days for the egg to hatch. The baby chick will start with 0 notes of friendship.

For cows, sheep, and goat pregnancies, you'll need to obtain a Miracle Potion. This potion costs 30,000 G (yikes!) at the General Stores in Calisson and Pastilla and not in the Animal Shops. You can also obtain Miracle Potions by completing one of Gabrielle's request delivered to your mailbox in exchange for bringing her 4 Glass. 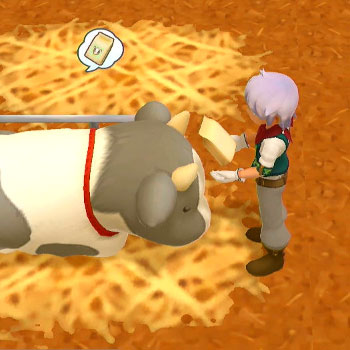 To trigger a livestock pregnancy, open your backpack, select the Miracle Potion to "Hold" the bottle, and then give it to the animal you want to trigger a pregnancy like you were giving a gift.

The length of the pregnancy appears to have a random element to it. I've had normal black-and-white cows give birth between 9 days and 13 days. I had a Jersey cow pregnancy take 14 days. I haven't had an animal pregnancy take more than 14 days, though.

Under each animal's profile in the DocPad is a little cow icon that reflects their stress level. All animals have the same cow-head icon. Typically, the cow icon looks normal with its beady, blank stare. As the animal becomes stressed, this cow icon will become sad. Continued stress will turn this icon a sickly blue color.

Conditions that cause animal stress are not being fed, staying outside all night until 6:00 am, and not having their compost picked up daily. You can help a stressed animal feel better by feeding them Gentle Feed and spending time outdoors. Make sure to remember to ring the bell to bring the animals back inside before they fall asleep at 9:00 am.

An animal experiencing stress will lose affection notes. In the worst-case scenario, a stressed animal will become sick. The Animal Dealer will tell you if that happens. The DocPad will also indicate an animal's health in the Condition field, either "Healthy" or "Sick." Because animals will not become better on their own, you must use Animal Medicine on them. This potion is sold at any General Store for 5000 G each. Not curing an animal's sickness will lead to its early death.

Your farm animals will have a defined lifetime. The length of their life is determined at purchase or birth. You won't know how long they will live, but in general, chickens live between 5 years and 6.5 years. Cows, sheep, and goats have a natural lifespan of 8 years or longer. If you obtained your animals before the animal lifespan change was implemented in the post-release 1.2 patch (May 2021), you might still have animals with shorter natural lifespans.

The Animal Dealer will visit in the morning to announce the animal's death. Reloading your save game to the night before will not extend its lifetime in the morning.

I have yet to see a camel or reindeer pass away from old age, but that's not to say it isn't possible; it may simply be a very long lifespan that I don't know yet. I did have a horse pass away, and for some reason its location icon still shows up in the Halo Halo region every so often. Perhaps a ghost horse but most likely a glitch.