Having a child after you get married is possible in Harvest Moon: One World. The first thing you need to do is... nothing. Really! 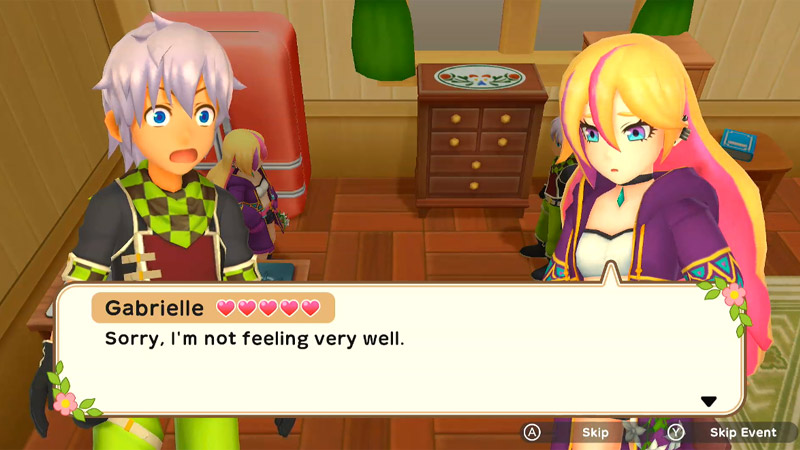 Starting on the day after your wedding, there will be an event that takes place 28 days later that will move you towards having one child. All you have to do is continue to play the game. It will take 6 seasons to move from pregnancy until full-grown child.

To begin, after you have been married for 28 days, in the morning the woman side of the partnership will begin to feel unwell. The only doctor in all the land is the veterinarian, Gabrielle. She'll stop by and diagnose the sickness as a pregnancy. Congratulations!

If you're married to Gabrielle, she'll tell you that she's pregnant after mentioning how unwell she's feeling.

After the pregnancy announcement, some new Harvest Wisps will appear:

Twenty-eight days after the pregnancy event, your spouse will talk to you about the gender of your child. You can choose to have a boy, have a girl, or either is fine; in which case, you won't know what it is until the birth. After this point the gender is set and cannot be changed! 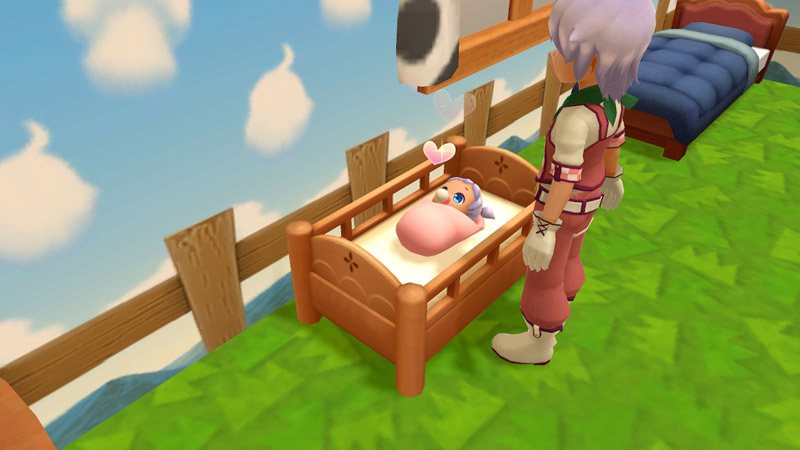 You will receive a Feeding Bottle and a Rattle after the baby has been born. These items will be added to the Important Items section of your bag and will be used at the proper moment.

The recipe for Baby Formula will also be added as the last recipe in the Cooking section (the first tab) in your kitchen's cookbook; it is not a Cold Dish (tab #2) or a Hot Dish (tab #3). Making Baby Formula requires 1 Milk of any kind. To switch from making the recipe using regular Milk, select the Milk listed on the recipe card, which opens your Bag so you can select Jersey Milk or Goat Milk. The resulting formula will be in the normal items section of your Bag.

Some players have experienced a bug whereby they cannot see the recipe for Baby Formula in their cookbook. This is because there are more recipes to collect (351, including DLC) than the number of cookbook pages available to display the recipes. There's nothing that can be done once this happens, but it can somewhat be avoided by not buying every recipe in the game until after the child is born and the Baby Formula recipe populates on an accessible page in the cookbook. For those who are trying to 100% the in-game encyclopedia, cook the meals from the last page of the cookbook and work your way forward to the first page, buying new recipe sets as you complete the encyclopedia entries.

To feed the baby, stand next to their crib and press the action button. The protagonist will use the Feeding Bottle, and a bottle of Baby Formula will be used from your bag inventory. The baby can be fed multiple times per day, but you have to wait for the baby to be awake. The little guy will open their eyes at 8:00 am and falls asleep at 9:00 pm.

You do not have to feed the baby. Doing so will help increase its friendship hearts, but the child won't starve to death if you don't feed at all.

The Lantern Festival and the Aurora Festival will not take place while your child is a baby. Your spouse will say they would rather wait to attend those festivals when the little one has grown a bit more. 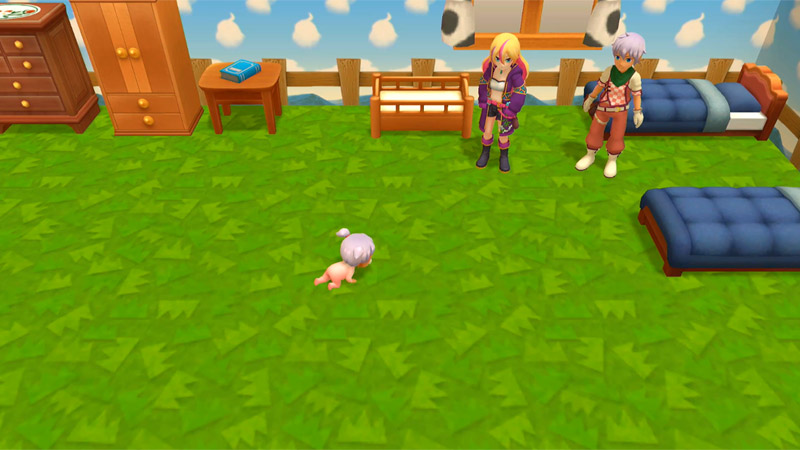 After another 28 days have elapsed, in the morning you'll find that the baby is now crawling around on the ground. The child has the same 8am to 9pm schedule, and you can still feed Baby Formula, but now you can interact with your child a second time to play with the Rattle. Like with feeding, playing with the Rattle simply helps with raising friendship. 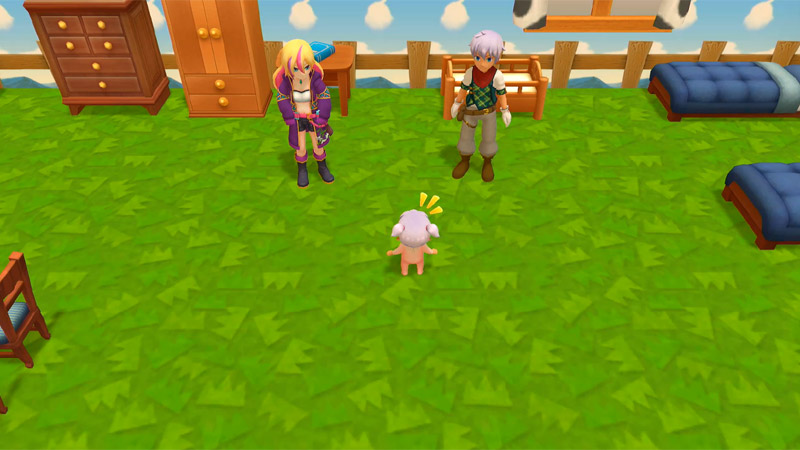 As before, 28 days later will trigger the baby walking event. Feeding and Rattle playing can take place as it always does. 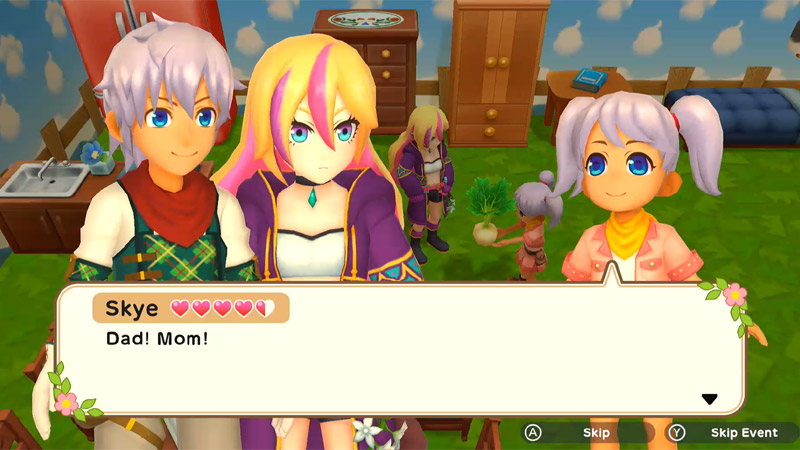 After the last 28-day period, the child will be full grown. The baby crib will automatically convert to a normal bed, so there will now be three separate beds inside of the farm house. The mature child will still keep to their 8-to-9 schedule as they always have. They also do not leave the house.

Interacting with the child will now start a picture-book reading scene for a moment, which help to raise friendship just like the Baby Formula and the Rattle did when they were small. Now you can give the child normal gifts like Flower Gelato and Strawberry Gelato. You can also give the leftover Baby Formula to your child as a gift; there's no point to toss it in the shipping bin when it has a profit price of 0 G.

On the child's first birthday, you'll wake up in the morning to find that your child has gone missing! They leave a note explaining that they've gone off to locate their favorite fruit, which you had discouraged the day before because they were too young to travel out by themselves.

Doc Jr will be able to help locate your lost kiddo if you bring him a Diamond. The raw Diamond Gemstone can be found starting on floor 21 of the Pastilla mine. Bring it back to the great genious to find your kid, who is perfectly safe and found the fruit they were looking for.

You can view the entire Lost Child event on the Fogu Youtube page:

A few days later, the happy family will head out for a picnic together at the Harvest Goddess Spring. The goddess will be pleased that everyone is happy.