An unofficial guide covering
Story of Seasons: Friends of Mineral Town
for Nintendo Switch, PC/Steam, Microsoft XBox One, and Playstation 4

This entry into the Bokujou Monogatari series begins the same as the 2003 original FoMT game. As a child, you spend a vacation on your grandfather's farm, helping him care for his crops and animals, and even making a childhood friend. After grandfather passed away, the Mineral Town mayor sends a letter to invite you back to care for the old farm.

The plot of the game is to revive grandpa's farm in whatever way you would like. The game does not have a defined storyline to follow and only ends if you turn down Mayor Thomas' offer at the beginning of the game. Players can freely move through the game at their leisure. 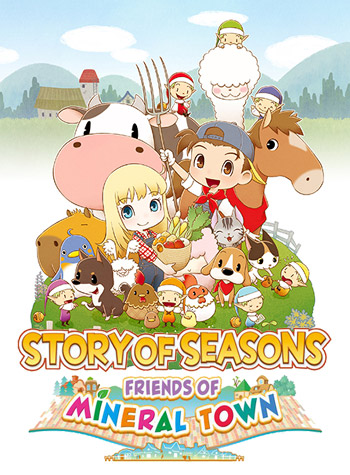 While the game mostly stays true to its original GBA form, there have been some updates to bring the game more in line with modern-day Story of Seasons games. For example, players can choose between playing the game in Normal mode or in Simple (easier) mode during character creation.

Story of Season: Friends of Mineral Town includes the same characters as the early-2000s game, though their appearance has been updated. Igusa Matsuyama, the primary artist for the Bokujou Monogatari series, designed both the classic styles and the updated designs. Another change is the switch from using the original English-adaptation character names to using the original Japanese character names.

Other changes from the GBA game include:

Story of Seasons: Friends of Mineral Town is © Marvelous and XSeed Games. Character design and artwork is © Marucome. This is a fan site and is not officially sponsored or employed by Marvelous or XSeed Games. This site is built off of personal gameplay experiences and help from the Japanese guide books. Web site design © 2020 fogu.com