Catching fish is an easy way to earn money while you're waiting for your crops to mature. To begin your fishing adventure, you first need to obtain a fishing pole. Go to Zack's house at Mineral Beach on between 10:00 am and about 3:30 pm to find the shipper digging through his belongings. He'll find a Cheap Fishing Rod and give it to you for free. You will need to have space in the Tool section of your rucksack to trigger this event.

Fishing can be done at any of the waterways around Mineral Town. Equip the Fishing Pole, press the Y Button to cast your hook into the water, and then wait until you see a "!" bubble appear above the farmer's head. To reel in the caught fish, press the Y Button again. Pressing the action button over and over isn't necessary for the Switch version of Friends of Mineral Town. 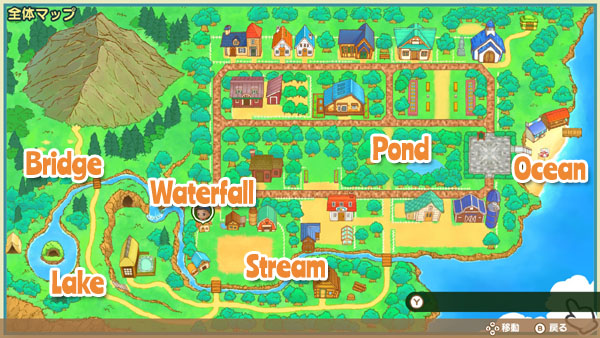 There are 6 fishing areas around Mineral Town:

Many fish can't be caught until you upgrade your fishing pole at Saibara's Forge. Upgraded tools can be charged by holding down the Y button and then releasing it to cast. The charge level required for the fish to appear is listed in the chart below.

Though there are a variety of fish, the fish you do catch will be categorized into either a Small Fish (24 cm or less), Medium Fish (25 cm to 49 cm), or Large Fish (50 cm or more). The same species of fish can come in one or two sizes, and you won't know what you'll get until you reel it in. The profit you earn will depend on the size of the fish and not the type of fish caught. 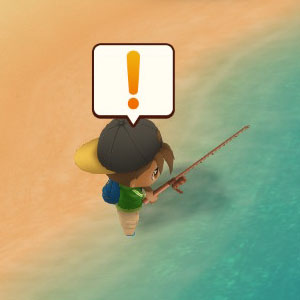 Other items can be pulled out of the water too. You can catch junk like Boot, Fishbone, Empty Can, and Branches. This garbage cannot be tossed back into the water, but you can either put it in the trash can in Rose Plaza or sell it via your shipping bin for 1 G each.

There are other special items you can catch in the Ocean after upgrading your fishing pole (see minimum required levels below) and charging your tool to the appropriate power level before casting into the water:

There are 50 normal fish you can catch; the original GBA game had 45 fish.

*There are TWO fish in the EN game that are called "Crucian Carp".

There are 7 king fish in the game that you can only catch using a cursed/blessed or mythic fishing pole, charged up to level 6 or level 7. These fish are rare and some have special requirements to complete before they can appear.

Once you catch a guardian fish, it will be tossed back into the water. You can't keep or sell the river kings, but their portraits will be noted at the bottom of the Fish Memo inside of the farmhouse bookshelf.

In the original GBA game, the Squid could be caught by tossing a small fish into the ocean before casting. Since the updated edition doesn't permit players to throw objects, the criteria was changed.

The Arapaima Gigas was added to the remake. You'll know when you've caught the necessary types of fish when the Goddess sends you a congratulatory mailbox letter. The other guardian fish will count towards the 50 unique types found.

The requirements for Huchen are the same as the GBA game, but the recipe for Sashimi is in your cookbook as part of the kitchen. Grilled Fish can be learned by cooking a recipe that requires Medium Fish as a cooking ingredient, and Sushi can be discovered by cooking recipes that use Onigiri, Small Fish, Medium Fish, and Large Fish.

Zack will greet you in the morning after you catch the last type of fish. He'll congratulate you on catching all of the fish available. Good thing he gave you that Fishing Pole! He won't give a reward, but it is worth 1 Event Farm Degree point for being a random event.