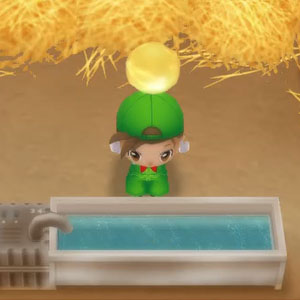 Throughout the game you may come across special Goddess jewels, Kappa jewels, and Truth jewels. These balls cannot be shipped or given as gifts to the villagers. You can either carry them around in the item section of your rucksack, or put them away inside the farm house item cabinet. The jewels are hidden around Mineral Town and within the rocks found on specific floors of the Spring Mine and Lake Mine.

There are 9 of each type of jewel. Once you collect all 9, the jewels can be exchanged for a Gem that can be used as a tool to help you with your stamina and fatigue. For the Goddess jewels and Kappa jewels, the exchange will happen automatically when you collect the 9th jewel. For the Truth jewels, Mayor Thomas will exchange them for the Truth Gem. All the jewels do not need to be in the item section of your rucksack for the exchange to take place, but you DO need to have an empty slot in the tool section to receive the final treasure (as it is a tool and not an item). If you are having a difficult time getting the last jewel to appear, make sure that you have an available tool slot.

The game will NOT keep track of the jewels you have found. Please write down where you have found an jewel after you collect it, especially with the Goddess and Kappa jewels that are hidden on specific floors of the mines. It's not fun trying to remember whether you've found an jewel on a certain floor during a prior exploration of the mine, as the jewels are indistinguishable from one another.

To use the power of the full-powered gem, select it to be the active tool from the Tool Ring. The gem will then activate to your benefit. The Goddess Gem and Kappa Gem are not difficult for players to obtain. The Truth Gem requires at least 50 in-game years to unlock.

The 9 Goddess Jewels can be found hidden in the rocks on certain floors of the Spring mine:

The chance that a Goddess Jewel will appear on the floor will be triggered at the point you enter the floor. The jewel is not 100% guaranteed to appear on its floor; there is a chance that the jewel won't pop out as you smash the rocks on the jewel's designated floor. While jewel hunting, use the two-save-slot technique. Save the game before going down the ladder to the floor where the jewel can be found, then save on a second save slot in case you need to reload because you fell down a pitfall hole while smashing the rocks to try and find the jewel. It's also handy to save on slot #2 every so often as you clear the rocks on the floor, so you don't have to remember where you last left off in your search if you do fall down a pitfall and have to utilize your second save slot.

The Goddess Jewels pop out of the rocks fairly easily. There may be only a few instances where a room has to be reset because the jewel didn't appear.

If the item section of your rucksack is full when an jewel pops out of the rocks, the jewel will rest on the ground until you've cleared space in your bag.

After you collect all 9 Goddess Jewels, the Harvest Goddess will appear to congratulate you. She will take the 9 Goddess Jewels and give you the Goddess Treasure in exchange. The Goddess Treasure is a white-colored stone that will recover your stamina (power berry icons) by 1 point every 1 in-game minute while you have it equipped as your active tool and you are outside (i.e., the Treasure does not work indoors because time only moves when the farmer is outdoors).

The 9 Kappa Jewels can be found hidden in the rocks on certain floors of the Lake Mine. This mine is located on an island in the middle of Mother's Lake. You can reach the mine during winter season when the lake water freezes and you can walk across the lake to the island. If you collect the Travel Stone from the 255th floor of the Spring Mine once you reach year 3 in the game, then you can reach the Lake Mine all year long by teleporting directly to the island.

The Kappa Jewels can be found on:

The Kappa Jewels are less scarce than the Goddess Jewels on most floors of the mine. The jewel found in the rocks on the 255th floor of the Lake Mine pops out pretty easily compared to the other floors. You can use the same save/reload technique as when hunting for the Goddess Jewels in the Spring Mine.

After you collect all 9 Kappa Jewels, this time the Kappa will appear to congratulate you. He will take the 9 jewels and give you the Kappa Treasure in exchange. The green-colored Kappa Treasure will restore your fatigue (face icon) by 1 point every 1 in-game minute as long as it is equipped as the active tool and you are outside.

The 9 Truth Jewels are hidden around Mineral Town. Eight of the jewels appear as you interact with objects, shops, and so on.

After you collect the first 8 Truth Jewels, go to Mayor Thomas' house on Monday through Friday and press the A Button when standing in front of the refrigerator. The last Truth Jewel will appear, and Thomas will exchange them for the Truth Treasure.

When selected as the active tool, the Truth Treasure will display your stamina and fatigue current point values on-screen. Your current fatigue points appear under the face icon, but this updated version of the GBA game already displays your stamina points, so this item isn't as beneficial as it originally was.

In the GBA game, one of the Truth Jewels could be found on the roof of the dog house. Since in the GBA remake the pets live inside of the farm house, the jewel location was changed to the Goddess' statue next to the church.