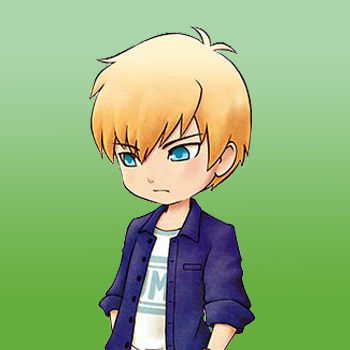 Gray works as an apprentice at his grandpa Saibara's forge. He resents how difficult it is to work under his grandpa's supervision and doesn't like the rural lifestyle that Saibara enjoys. Gray does enjoy the metalsmithing craft, but feels that nothing he does meets Saibara's unrealistic expectations. He's discouraged, mopey, and could use a good cheering up.

Schedule: Gray lives on the second floor of the inn and starts walking to the forge around 7:00 am. If you have not seen the first rival event between Gray and Mary, he'll leave the inn and head towards Rose Plaza for an hour, arriving at the shop around 9:00 am. If you have seen the first rival event, then Gray will leave the inn and go directly to the shop, arriving at around 10:10 am. He'll then leave at 1:00 pm for the library and its lovely librarian, where he'll stay until 4:00 pm. After that he'll return to the inn for the day. On Mondays when the library is closed, he'll skip the library and go directly home to the inn. On Thursdays he'll spend the morning reflecting on the summit of Mother's Hill before heading to the shop at 10:00 am.

After marriage, Gray returns to visiting Rose Plaza for a few hours in the morning before work, then heads back to the farm house after 1:00 pm.

Roasted Corn: Corn + Oven (Recipe learned from Ruby after cooking 3 or more of her recipe prerequisites)

Note: Lou will visit the second floor of the inn on Sundays. To unlock her chef visits, you'll need to toss at least 75 gift offerings (one per day) into the Goddess' pond by the hot spring, then wait until a sunny Sunday and exit your farm house to trigger her introduction. Lou will teach you a meal recipe when you talk to her on Sundays if you have the following recipes in your cookbook: Bamboo Rice, Chocolate Cookies, Curry Rice, Tamagoyaki, Mayonnaise (L), Miso Soup, Mixed Juice, Popcorn, Caffeine, or Zaru Soba. To receive the recipe for Roasted Corn, you'll need to have at least 3 of the listed recipes in your cookbook. 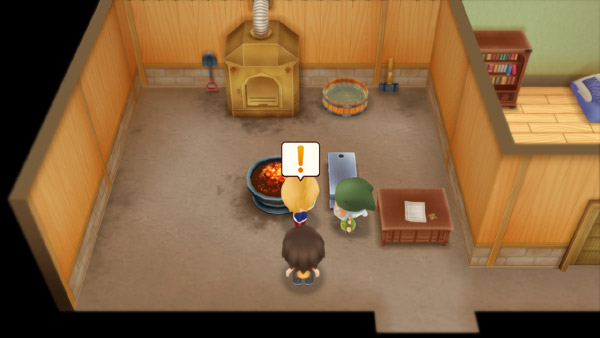 Saibara and Gray appear to be in the middle of a heated argument with each other! You attempt to help, but Gray yells at you too. Saibara then scolds him for being so rude, which snaps him back to normal. They then welcome you to their shop. Saibara says he's going to take a small break and leaves to go outside.

Gray is beginning to feel discouraged with his work. His grandpa doesn't appreciate him and was telling him to redo the work he just completed. Gray tries every day, but he is considering giving up his training.

Yea he knows, as it would be bad if he just gave up. Gray thanks you. He isn't sure what Saibara is trying to tell him, but he trusts that day will eventually come.

Is that what you say to other people? Gray asks you to leave. 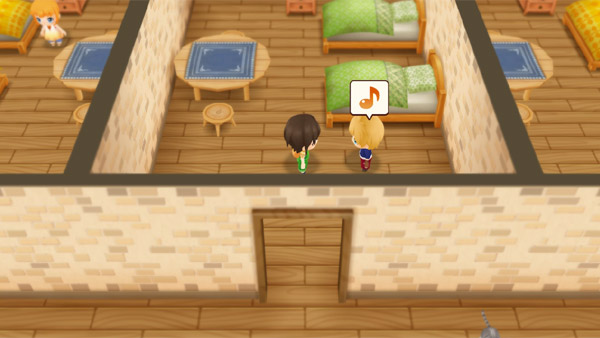 Gray has something he wants to ask. He feels guilty about yelling at you earlier and wants to apologize. That wasn't the proper way to greet customers to the shop. You don't mind, which makes Gray happier. When he doesn't know who someone is, he tends to have an attitude. He hopes that you don't hate him for it.

Oh yea, you ship ores from the mine, don't you? He works with ore and gems at the forge. He really enjoys it! Gray wants to make new things, but he hasn't told his grandpa yet. He's looking forward to doing something more.

Ah it's not that big of a deal, but Gray seems happy. He's a long way to go, but he hopes to become a better craftsman than his grandpa. Gray wants to show you his handywork after he makes it, but keep your expectations low. He'll try his best.

Gray is disappointed that you don't appear to be interested. He confirms that he will do his best, especially if he can be successful at it. Maybe someday he can make something for you. You nod your head in agreement. Gray tells you he'll be looking forward to it. 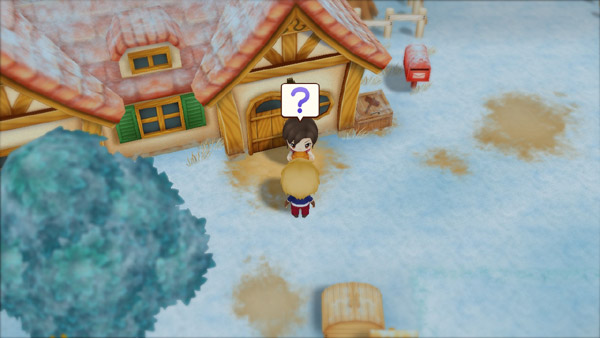 Gray will greet you at the door in the morning. He says he was scolded again today by Saibara, but thinks he finally understands why his grandpa is so hard on him; it is to help him to become a better craftsman. Gray mentions that he doesn't see you wearing a lot of accessories. Are you not interested in fashion?

He figured you would be interested! Oh, but he didn't mean that in a bad way. Gray hopes you're not angry with him. Anyhow, he made a broach and wants you to have it. He crafted the brooch without his grandpa knowing about it, though he doesn't feel it is as good as what Saibara can craft. He had decided that the first one he successfully made would be a gift for you. Gray will then head back to the forge and leave you with Gray's Brooch. You can place it on n your trophy shelf or store inside your cabinet; you can't wear his gift.

Gray becomes sad and says he needs to return home. 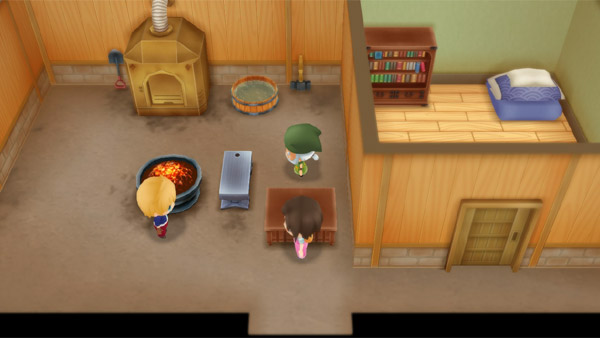 Saibara welcomes you to his shop and tells you he wants to ask you something. He's glad that you've become friends with Gray, as his grandson has few friends. Gray has even become a hard worker. You should be able to tell with how well your tools feel. He calls Gray over to his counter and tells Gray to take the rest of the day off. Gray is worried that he did something wrong, but Saibara thinks it is because he's preoccupied with you. Saibara asks that you spend some time together with Gray.

Back at the inn, Gray tells you that sometimes he doesn't understand his grandpa. He does have a question though; will you always stay here in town?

Gray is glad you don't plan to move away. He was worried that you might be like Kai, who only stays for a little while, or like people who move away to other towns like his father. He has been worried if you were going to do the same. With you gone he would be lonely because he does not have a lot of friends. He's glad that your here and now he doesn't have to worry about it.

Oh, so you could leave... ah, no it's nothing. He just wanted to talk for a little bit. 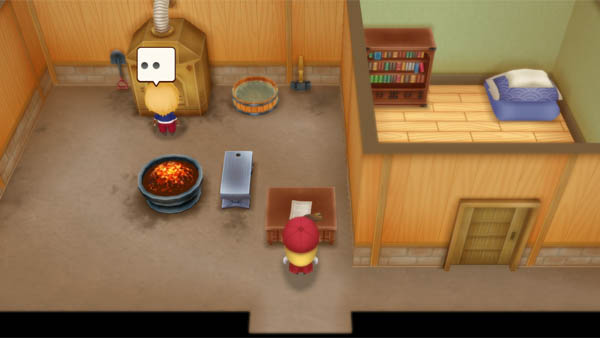 Gray explains that his grandpa had to run an errand, so he's in charge of the shop at the moment. He suggests that you come back later, but then his keen eye notices that your sickle appears to be in bad shape. Gray asks that you wait for a little bit while he fixes your tool, though maybe it would be best to wait until Saibara returns... Gray is concerned that he might make a mistake during the repair. You tell him that you want him to fix it! Gray isn't entirely confident that he can do it himself, but he agrees to give it a try.

After a bit, Gray returns to the shop counter with your sickle. He's really pleased that he completed the task successfully! Gray was nervous about repairing something by himself for the first time, but he wanted to try to repair it for you.

He's been thinking a lot; since he's still just an apprentice, there wasn't much that Gray could do to help you with your farm. But, if your tools will need maintenance and repairs, maybe there is something he can do for you after all! He is motivated to work harder to train as a metalsmith so he can assist you, even it is just a little bit.

You really think so? It's natural for him to want to help his sweetheart, but he's still glad that you said that.

He doesn't intend to lose sleep over it... he was just thinking he wanted to help a little bit.

Saibara returns to the shop and notices the sickle in your hand. He asks Gray if he had repaired your tool. Gray admits that he had, and Saibara tells him that he did a good job! Saibara believes that Gray might finally understand what he has been overlooking all this time.

After Saibara leaves, Gray is very relieved. He is pleased that Saibara finally recognized the hard work he's been putting into his training. Though, he wonders what his grandfather meant by what he has been missing. Maybe he has been missing confidence? Gray admits that he may have lost his confidence along the way.

Gray thanks you for being there for him. It's as though going steady with you has started to lift the haze and reveal sunnier days ahead. It might not be much now, but someday he will become a master craftsman. 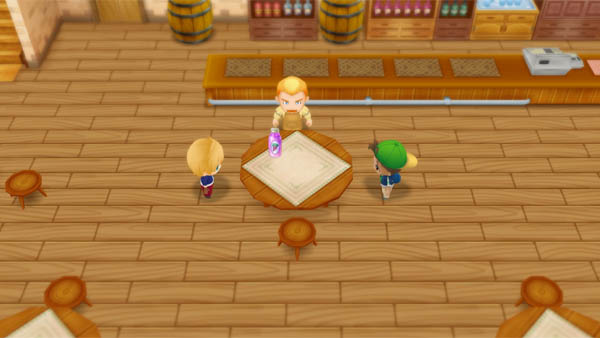 You bump into Gray as you walk out of your house. He asks if you would like to grab a bite to eat, so you head out to the inn for some food.

As the two of you chat and enjoy your meals, Dudley tells Ran how lately it's been nice to see Gray laughing and smiling so much. She hasn't noticed, but Dudley has never seen Gray smiling so much before. It even makes him smile! Ran still doesn't follow what her dad is saying, but reminds him that he's suppose to be taking care of Gray's drink order.

Dudley walks over to the table and delivers the drink to Gray. Before he leaves, Dudley tells Gray how he's notice Gray's personality change and how he's smiling all the time. Previously, he would just hang out with Saibara and had an air of inexperience about him, but now he seems a lot more assured of himself. Gray didn't know that Dudley thought of him as imcompetent, though Dudley clarifies that he didn't mean anything bad; he just wanted to comment on how great of a guy Gray has become. Dudley apologizes and tells Gray that his drink is on the house.

Gray is fixated on Dudley's words. He asks you if you think he's grown.

That's good! Previously, Gray just wanted to be acknowledged by his grandfather, but that was before he met you. Now he feels like he has a firm goal of standing by your side. He can feel the motivation growing inside of him.

Gray didn't think you would be the type to raise his expectations, only to crush them under your mighty farmer boot.

Gray feels he has grown a bit, all thanks to you. He is looking forward to being together with you.