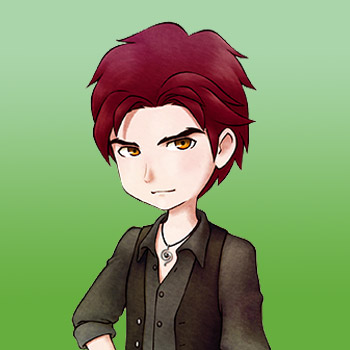 Brandon is a new character added to the Nintendo Switch remake of Friends of Mineral Town. He is a famous artist whose preferred medium is wood. He moved into Gotts's house to help the carpenter out, and in exchange Brandon gets access to wood to practice his craft. He has a quiet and calming personality who prefers to sculpt in solitude.

Schedule: Brandon spends most of his time inside of Gotts' house. On sunny Mondays through Saturdays he'll start his day inside the carpenter's shop, though Gotts will lock the door to his house when he leaves in the morning at around 7:30. Brandon will also leave the house around 8:10, and then will spend between 8:30 and 12:00 at the lake on Mother's Hill. He'll then return to Gotts's shop around 12:30 and stay there for the rest of the day.

On Sundays he'll be outside at the lake, the forest by Gotts' shop, or at the mountain summit.

After marriage he'll start his day inside your farm house, but then returns to the same Monday-Saturday sunny-day schedule. On sunny Sundays he'll forgo his lonely visit to the mountain summit to return to your farm house. On rainy and snowy days he'll stay inside the farm house all day. 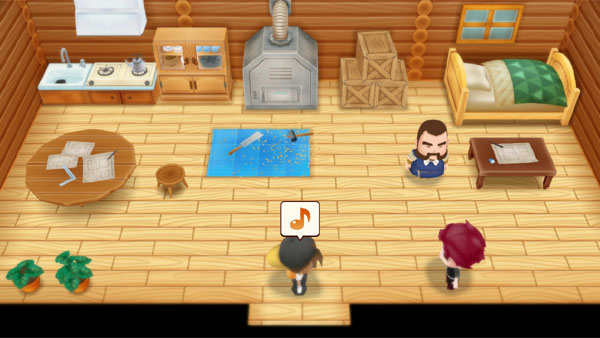 Gotts wants to introduce you to someone who just moved into his house. He calls Brandon over to meet you. The artist comes out from the back, but he is a bit annoyed about being interrupted. Gotts tells him your name, but Brandon seems to be familiar with you already. Gotts explains that Brandon is an artist who makes various wood sculptures. Gotts had found him outside in the woods, where he had been looking far and wide to find some high-quality trees. Now the artist lives here in Gotts's house.

It isn't the first time Brandon has heard that, but it isn't something he's going to worry about right now.

Brandon wonders if you're legitimately concerned for his well-being.

Gotts laughs and tells you while Brandon is quiet, he isn't a bad guy. The two of you could be good friends. 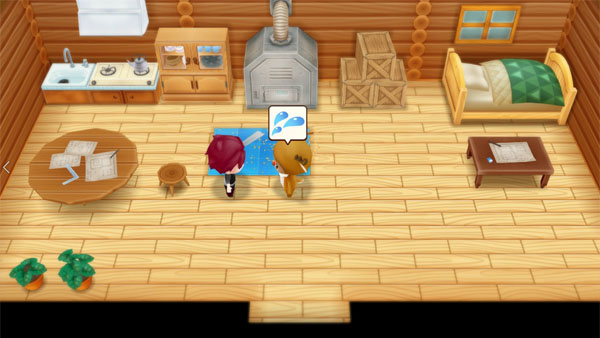 You walk into the carpentry shop and accidentally startle Brandon. Before you leave, Brandon asks what you associate with the terms free, sinful, or avant-garde? You're clearly confused with his strange question. Brandon explains that he's working on a commission, but he's been having a tough time coming up with inspiration. He needs somewhere to start, so that's why he had asked that question. It's fine if you don't have any idea...

Brandon admits that's an interesting point of view. It's a curious answer! Though...

Ah, perhaps a chained cat! Brandon is satisfied with his solution even though it makes no sense to you. He explains that he needed a spark of inspiration. Sometimes it's just a conversation or eating a meal with someone; the triggers will vary. This time he looked to you. His conversations may seem pointless, but he assures you they are not without purpose. Talking with you was very useful! Brandon thanks you and is anxious to start working. He asks that you don't bother him for a while. 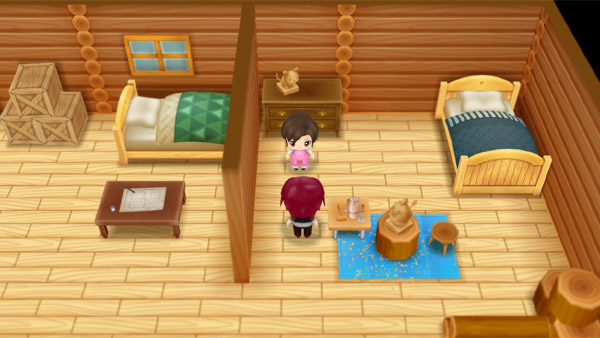 Brandon is busy in his studio and shows you his latest work of art, themed as "thoughts from beyond the infinite cosmos." It's still a work in progress though. He explains one day he had a dream that he was floating through the universe. This piece is built on the inspriation he had at that time. It's natural for him to give shape to what he sees in his dreams. Sometimes all one has is a vauge image to work off of. With a little bit of patience, someday it will take shape.

You're a bit confused with Brandon's enthusiasm. He doesn't understand how someone can give up on their inspirations. There's an inner universe within each person. Brandon hopes that if everyone could express their universe, the world could be overflowing with art. He notices that you like the sculptures that he's working on, and heads out to get some coffee while you admire his work.

When he returns he notices that you have your eye on a cat sculpture.

Brandon tells you it's fine to praise him for his art.

Of course, maybe you mean that you're intrested in his creative process? Oh, you actually mean him. He's nothing more than a boring human, but it is his hart that makes him who he is.

Brandon notes that you're quite eccentric to be carrying on a conversation with him. Most people chat with him, but he tends to cut the conversation short. Apparently he's not very good at small talk.

Anyhow, Brandon tells you it doen't bother him. There's a miniature version of the artwork available. Brandon looks through the drawers and gives it to you. He would love to hear your thoughts about his work the next time you visit.

The item Brandon gives you can be placed on the trophy shelf inside of your farmhouse. You'll receive the sculpture, The Looming Nightmare: Insomnia, whether you chose the positive LP or negative LP response. 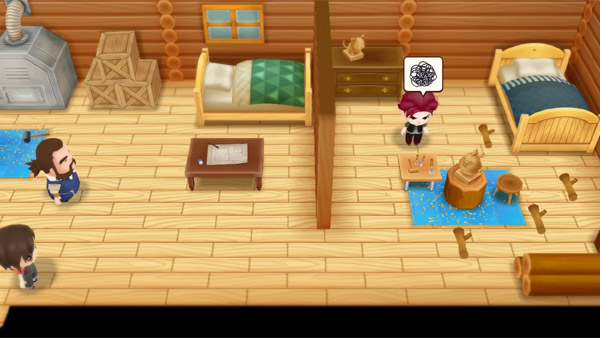 Gotts is glad that you're here to visit Brandon, as the artist appears to be immersed in his work. Gotts would even describe it as obsessed. Brandon won't eat or drink and his workshop is a mess. Gotts is going to leave for a bit and asks if you can help him clean his room.

You head over to chat with Brandon. He tells you that he's a little busy at the moment.

You tell Brandon that Gotts would like the room cleaned. Brandon looks around and realizes there's things scattered everywhere. He can't take a break at the moment though. He'll get to it later when he's a chance. You offer to clean the room for him, which he accepts.

True, Brandon doesn't want to be an annoyance for Gotts. Can you do this for him as a favor?

While he is hard at work, you pick up the wood laying around the floor.

Brandon finishes his latest sculpture and notices how clean the room is. He thanks you and says that this happens whenever he becomes enthralled with his work. He'll talk to Gotts when the carpenter returns.

Just at the moment Gotts comes home and is ecstatic that the workshop is so tidy! He knew you were the right person for the job. Gotts can't talk to Brandon when he's busy. No matter how much he tries, Brandon doesn't seem to hear him. He was hoping you would be able to get through to Brandon.

Brandon admits he doesn't notice that he's was being talked to. Gotts tells him he's been trying every day, telling him to eat and sleep. Brandon replies that he doesn't remember any of that. 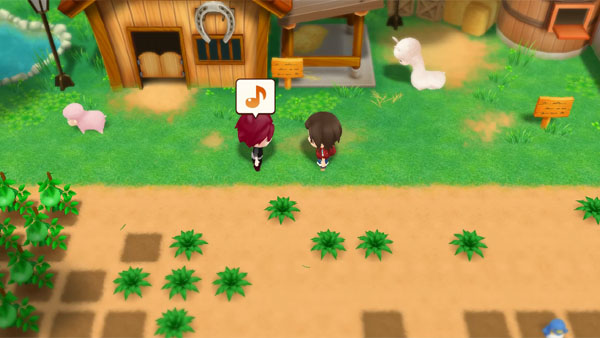 Brandon greets you at the front door. Since the two of you are a couple, he's interested in what you do for a living. You show him around the farm, and he comments on how large it is. You manage all of this by yourself?

His attention turns to your farmhouse. Brandon notices some cracks in your exterior wall. Your house will become drafty if those aren't fixed soon. Typically Gotts would handle something like this, but Brandon decides to make the repair himself.

After a little bit, Brandon has the wall as good as new. He tells you that he can repair something like this; after all, he does live with Carpenter Gotts and sometimes helps him harvest wood and make house repairs. Brandon looks around some more and finds another issue with your house. It looks like there are more spots to correct!

A little bit more tinkering and the two of you have everything fixed. Whew, Brandon is a little sweaty from all that work.

Brandon tells you not to worry about it. You've helped him several times with his work. Besides, one can tell by looking at your farm that you take your work seriously. He blushes and explains that he wanted to do something that might be of help.

Brandon wonders if you were really paying attention. He said he sometimes helps Gotts with his work. Renovating a house falls under "helping" as far as he's concerned.

Anyhow, watching you on your farm has filled him with inspiration. A ranch is a place where a lot of lives are built. He's going to return home to shape his new insight. 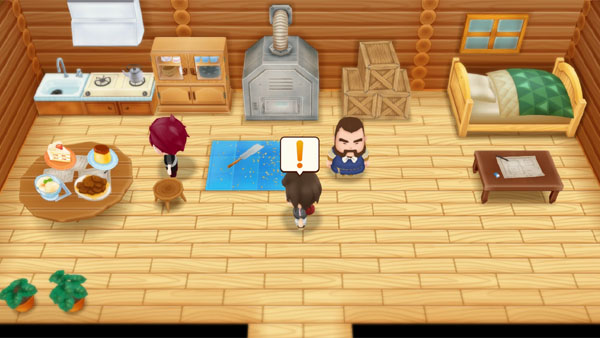 Brandon has stuffed himself full of food that he can barely walk. Gotts pokes fun at his gluttony, but Brandon says he's always burning energy. Even if he gained a lot of weight, he has no intention of changing his ways!

You walk in and notice the pile of food and Gotts's worried demeanor. The carpenter tells you that he really can't understand artists at all. Maybe if you talked to Brandon, he might change the way he eats. Gotts is going outside, as just looking at this situation is giving him heartburn.

Brandon turns and tells you that he's in the middle of a difficult challenge at the moment. He reveals that he's actually in a bit of a slump. Lately, he hasn't received any divine inspirations. When he's upset, Brandon admits he tends to stuff himself with sweets and desserts.

Oh my! Brandon is tired of hearing how it's terrible for him, but he doesn't know of any other way that would help him get out of this slump. When your brain gets stuck, it is going to ask for sugar. What was the last healthy thing he ate? Ah, Brandon can't recall. You volunteer to prepare a healthy meal for him. If you make it, Brandon says that he will eat it. What do you want to cook for him?

After setting the table, Brandon says that the spread looks good. He isn't a fan of vegetables, but maybe his body is craving vitamins. He had eaten so many sweets that this lite meal may be just what he needs.

After setting the table, Brandon admits that he's still full of sweets. It'll be tough to eat the food you prepared, but since you made it he's going to give it a try.

Brandon eats the meal and tells you that it tasted good. Unfortunately, your food didn't do anything for his disposition. It's not going to be easy to resolve; it's like a tunnel without an exit. He can only keep moving forward.

Brandon admits that he now feels calmer and less stressed. Typically he listens to the voices around him, which then guide him to creating his art. When he works with wood, he listens to the wood; the same goes when working with clay. But when he's in a slump, he can't hear the voices at all. When that happens, he can't create anything, and that frightens him. Brandon wonders if you think that he's crazy, as you don't seem to understand. He asks that you don't tell anyone else about this, as they might think he's even stranger than they already believe him to be. Even though they might not get it, they'll still make fun of him. Brandon hopes that you'll understand.

Even though he hasn't escaped his slump, he admits that he feels better. You are an odd person. Someday he wants to show you his artistic ambitions... oh! Brandon gets a strike of inspiration! Brandon asks you to wait and then runs to his workshop.

When he returns, he hands you a sculpture that you inspired him to create. He gives the sculpture the name of Life's Mystery and Milk: A Sculpture of Earth's Bounty and the Chasm of Love. Now that he's finished, maybe you'd like to chat with him for a little bit more?

The sculpture given to you by Brandon can be placed on the trophy shelf inside of your farmhouse.