To promote the game as an upgrade "plus" version of the original DS game, Marvelous added several bonus DLC options for the Japan 3DS release of Tale of Two Towns (December 2017), over 6 years after the 3DS version was released in North America. These bonus content features can be downloaded by first updating the 3DS game to version 1.1 or later via a patch in the the Japan 3DS eShop. After applying the patch, a SHOP icon will appear on the game's title screen.

The bonus content is NOT available in the North American or European versions of the game. It is a Japan exclusive to the "plus" edition of the 3DS game.

The first bonus DLC contains three new wild animals that will roam the mountain between Bluebell and Konohana. This download is free and available starting from the game's release date, December 14, 2017. The wild animals are:

The wild animals are just decorative. You can't give them food to increase their friendship, as they are already at max friendship. They also do not give gifts like the regular in-game wild animals do. 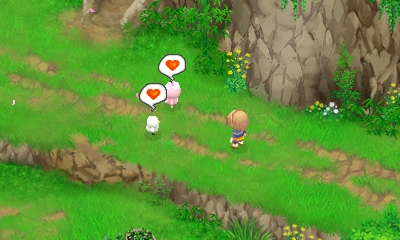 This DLC was released on January 11, 2018, and costs about 100 Yen. Once purchased and downloaded, the Japan illustration characters Pisuke and Usagi will appear in the mountain area. The town mayor will introduce you to the little bird and the pink bunny in the morning after downloading the DLC and the 1.2 game patch from the eShop, and from there you have to wander into the mountain areas to trigger their cut scenes.

The two animals first will randomly apper when you either walk from Bluebell to Bluebell Low-Mountain or from Konohana to Konohana Low-Mountan. They will greet you with heart bubbles above their heads, circle around your character, bring up a dialog box that is empty except for their picture, and then run off. You don't receive anything, but they are cute to watch. 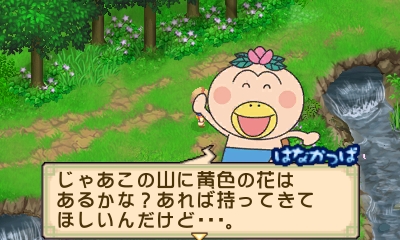 Released on January 17, 2018, with a cost of 100 Yen, this collaboration introduced Hana Kappa to the game. The little kappa appears in the Bluebell Low-Mountain area on sunny days after 2:00 pm. Hana is there searching for flowers to help its own flower grow and will request that you bring it a yellow flower, a blue flower, and then a red flower. All of these can be found growing wild in the mountain area: Moondrop Flower, Magic Blue Flower, and Magic Red Flower.

Each time you bring Hana the requested flower, the flower on its head will change color and you'll receive a flower in return. After the third flower, Hana will decide to return to its home village.

Hana Kappa will return though. It'll pop up in the same spot at the same time, but won't ask you to search for flowers. Instead, a little bit of conversation dialog will appear (as it is searching on its own now) and then it will walk off.

The downside is that the scene can trigger every time you end up going to Bluebell Low-Mountain at the right time of day. 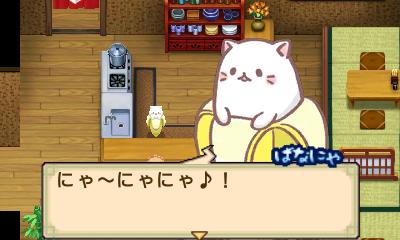 Released on January 18 for 100 Yen, This banana-wearing kitty cat will appear in village buildings when you walk inside. Bananaya is tough to trigger because it requires specific day/time requirements to appear.

The first one that I've seen so far (Watch on Youtube) triggers when walking into Jessica's livestock shop in Bluebell after 5:00 pm. 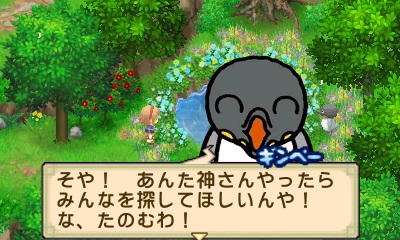 This DLC was released on January 23 for 100 yen. After purchase and download, walking to the top of the mountain will trigger an event where Ginpe, the Basket de Gohan penguin, will jump into the Harvest Goddess' pond. This will summon the goddess, who asks what the penguin is doing. Ginpe explains he lost his fellow penguin friends, Sanpe and Cheza, and asks her for help. Since the Harvest Goddess can talk to animals and you cannot, she passes Ginpe's plea for help to you and sets you off to find his friends in the mountain areas.