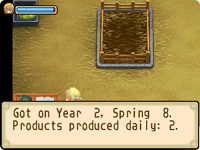 When you harvest products for your cows, sheep, alpaca, and chickens, you will only receive one product. Cows and Jersey Cows will give you milk every day, Chickens and Silkie Chickens will lay eggs every day (as long as they are inside the chicken barn at 6:00 am), Sheep and Suffolk Sheep will produce wool every four days, and Alpacas will produce wool every six days.

If you check on your Animal Stats from the book inside the barn, you'll notice that there will be an entry for "products produced daily". This will have "1" listed next to it, indicating that the animal can produce one item at each harvest. You can increase this number by feeding the animal the treats you can buy from Cheryl at Jessica's Livestock shop in Bluebell Town.

There are four types of treat crackers you can buy: Treat, Vegetable Treat, Grain Treat, and Nutra Treat. The treats will appear randomly in Cheryl's inventory. A regular Treat will cost 500 G but the other three are 700 G a piece. Nutra Treats won't appear until you've reached year 2. This means that you can't completely increase a productivity level until then, but you can still give the other treats in preparation for Nutra Treats. 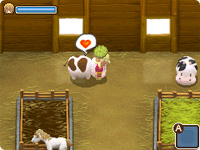 When you feed an animal a combination of different treats, its production value increases. You can only feed one treat to an animal per day, so it will take awhile (at least 31 days) before your animal will start producing more than one item at each harvest. The maximum level of productivity you can increase to is 5. You can continue to give treats once an animal reaches level 5, but it will just affect its friendship.

The only way to tell if an animal's productivity value increases is by checking the animal status ledger in the barn. The game doesn't display a notice or play a chime when you've given enough treats to an animal. You'll just have to go to the book and manually check it.

Any offspring born from an animal with an increase in productivity will not carry over that trait from its parent. The baby animal will start out at "0" and then change to "1" once it becomes old enough to produce goods.

Typically, each animal requires the same number of treats per-level increase. The Alpaca is an exception though. Initially, an Alpaca requires 45 treats to go from productivity level 1 to level 2. Once it reaches level 2, it only requires a total of 25 treats to reach level 3 and each level after that.

The game does not document the number of treats that you've give to each animal, so keep it written down on a piece of paper. The other thing you can do is just concentrate on giving treats to one animal and then just buy enough treats necessary to increase a level. For example, if you want to increase a Chicken's productivity to level 2, only buy two Treats, four Grain Treats, 15 Vegetable Treats, and 10 Nutra Treats. Once you've given that Chicken all of the treats that you've bought, you'll know that it will at productivity level 2.